When we first moved to Merida in 2002, the house next door to us was empty. We lived in Casa Panadero, and the house next door was called Casa Pocito. We rented Casa Pocito for awhile as an office, but soon moved into our own building a few blocks away. A few months later, new owners moved in and we considered ourselves very fortunate to have such friendly and fun neighbors.

Our new neighbors had retired from their jobs in Charleston, South Carolina, and had moved to Merida to relax. We enjoyed living next to them, sharing our experiences of this new adventure called "moving to Merida"... but most of all, we loved seeing how they decorated their house, which had a floor plan that was a mirror image of ours. They always had colorful art, beautiful flower arrangements, a glass of something cold with ice and of course, they had Max, the regal black standard poodle, who lent an air of elegance to any room he graced with his presence.

Imagine our surprise and dismay, then, when they announced that they had sold Casa Pocito and were going to build a new home in south Merida. They were one of the first gringos we knew who ventured down south of the zocalo (soon to be followed by hundreds of others, including ourselves...). They found a large colonial building that was mostly facade, backed by a huge piece of land. They designed the house they built there for lots of cool shaded space inside, and a big garden to plant and tend in the back. And, of course, room for guests and a swimming pool.

Working with Manuel Kuk, a local contractor, and their own design, they were able to finish the house in about five months for less than $200,000 USD. Even taking into consideration that this was before the costs of materials (especially cement and block) went up a few years ago, this was an impressive accomplishment. They built a very large and luxurious home for a reasonable price in record time.

How did they do it? Well, first, by doing it a few years ago. Also, by being their own architects. And by being there every day, day after day, and making it their top priority. By reusing the rocks they cleared out of the dirt, keeping things simple and being creative with humble materials. Their local contractor, Manuel Kuk, was well known to them, and was pleasant and easy to work with, and his workers were efficient. And the house, while large, is a simple layout, which made for few misunderstandings.

The front part of the house is the original structure, with two guest rooms, one on either side of the wide entryway. The facade sports those old-fashioned windows with the straight old iron protectores that just say "Mexico" and inspire window-envy... until you step inside the foyer, look up and are consumed with old-wooden-beamed-ceiling envy. Such is life in Merida. If you visit other people's houses, be prepared for house envy. It's rampant here.

Everything behind those three front rooms was built new, but by now (four years later), you really can't tell the difference. The central patio with a gurgling stone fountain is reminiscent of the courtyard in the Frida Kahlo movie, minus the peacocks and parrots. While we're on the subject of animals, when we shot this video, the whole house was very obviously minus Max, the stately dog, on our visit, as he just passed away a few weeks before we were there. We missed his presence, but we're happy to see that the owners are looking at this as an opportunity to travel without guilt, which seems like a good way to deal with a sad event.

When you walk into this house, though, it is almost as if the house flings open its architectural arms in exuberance, inviting you to revel in all the space that it has to offer and you have to enjoy. This coral-colored room is quite large... large enough to hold string quartets and audiences of 100 comfortably. Though unplanned, this room has wonderful acoustics and has been the site of more than a few musical events since it was built. The elegant floor tiles from Mosaicos Peninsular (very Versace-esque!), the white-lined arches that march down each side and the beautiful flower arrangements add to the grandeur that is this Great Room.

The Rest of the Rooms

The main house only has one bedroom... a very large bedroom at the back, facing the garden. The bedroom and the bathroom are set apart from the rest of the house by color... soft swaths of violet and pink cal paint that surprisingly go perfectly with the colonial red zocalo tiles that provide footings to all the walls and with the grey slate tiles in the bathroom. On the same side of the house is an inviting kitchen with a warm Moroccan chandelier that hangs low over an island, and a talavera tile backsplash against the kitchen counter. In the middle on that side of the house is a den with an impressive bookshelf and all the media accoutrements needed in the 21st Century.

On the other side of the Great Room is another big room, running the length of the house and painted in a soft ochre color, where dining and visiting are the main events. The dark wood oversized dining room furniture would probably overwhelm in most homes, but here it looks perfect. And the modern art, including the modern sconces and other works by Katrin Schikora, is a great counterpoint for the mostly traditional furniture. And all the rooms are topped off with very high ceilings, and strategically placed tragaluces (skylights).

A screened-in porch area at the back of the house looks into the garden. Four years ago, the owners planted this garden and the plants have grown so prodigiously that they had to remove trees and other plants to keep from recreating an Amazonian jungle. What we especially love is the formal layout... four quadrants of planting, surrounded by stone walkways, and in the center, a large fountain that adds the sound of water. Each of the four quadrants now has a thriving orchid tree, with its butterfly-shaped leaves and pink orchid-like blooms.

Beyond that, away from the house, is a large swimming pool with plenty of places to sit in the sun, though frankly, we don't do that much here. Sitting in the sun during most of the year is a bit like stepping into a big broiler, so it is important to have ample shade. This garden has shade under an open-air poolhouse with a red-tiled roof, with seating for lounging and dining and enjoying the view.

Life seems good in this house. Everywhere you look, there are beautiful and interesting things. Everything you need is well within reach. There is air and space in this house in good measure... two luxuries that are much appreciated in this climate. By walking around, we can tell that the people who live in this house are enjoying their time here... and besides staying warm and staying out of the rain, isn't that what a house is all about? Here, once again, is La Buena Vida... the Good Life, in Merida! 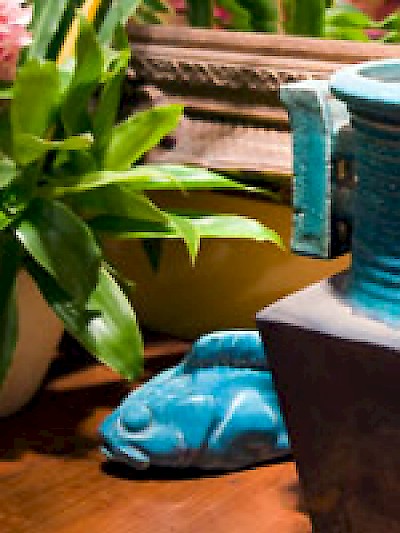 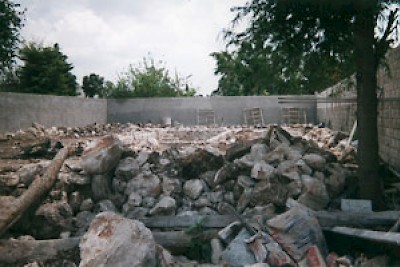 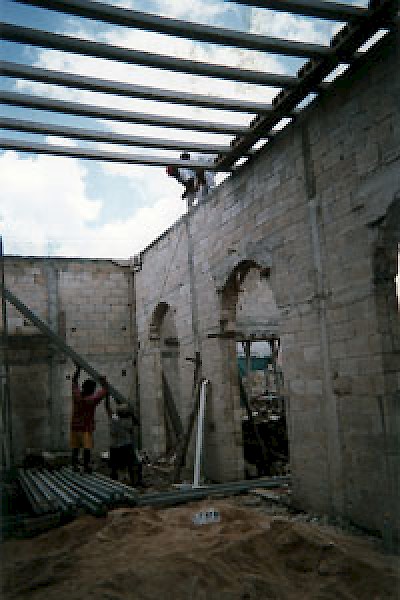 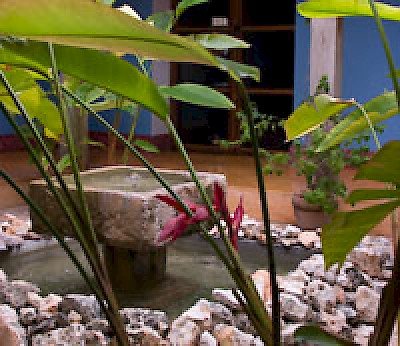 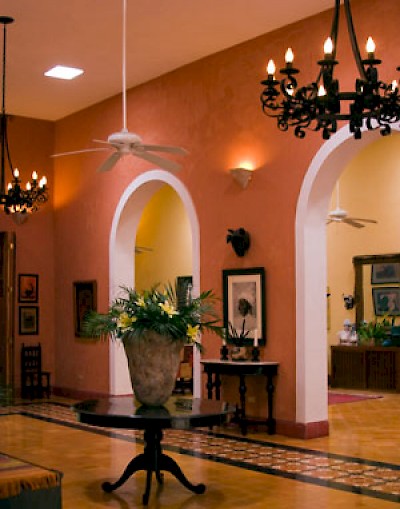 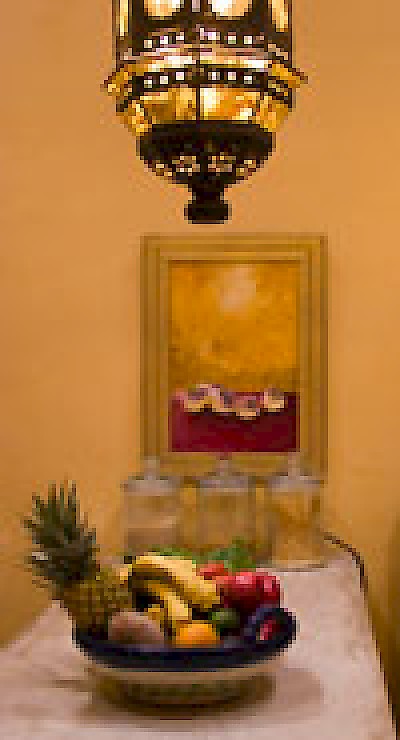 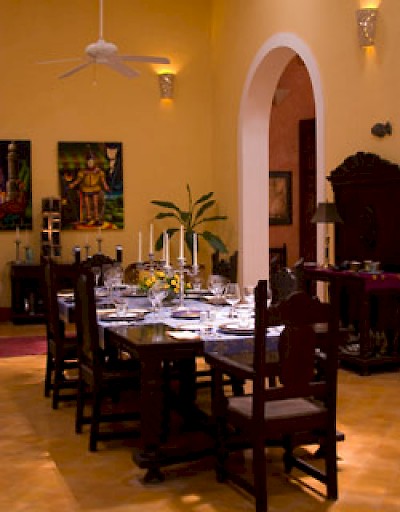 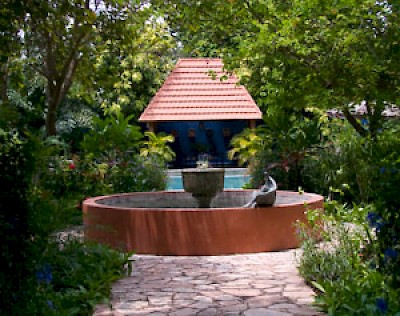 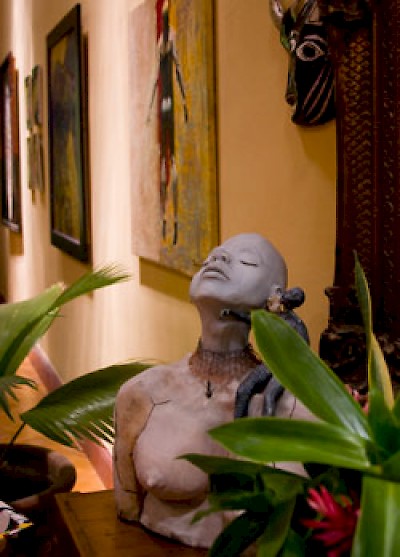