Houses of Merida - Episode One

Behind the Wooden Door

Aren't you just dying to know what's behind those facades? As you drive down the calles and avenidas of Merida, haven't you always wondered what the houses look like once you get past the front door? And if you are in the process of renovating or building a house here, don't you find yourself wondering (about five times a day...) "I wonder how everyone else solves this problem?" or "I wish I knew a more creative or interesting way to do this!" or even "Should I expect this to look differently? or is this just how they do it here?"

We thought as much! We know you are having those thoughts, because we have them all the time. And everyone else we know has them too.

Thanks to the wonders of the 21st Century, Yucatan Living is launching a new series... a video series called, not surprisingly, The Houses of Merida. This new topic on the Yucatan Living website will feature a new three to five minute episode every week or two (hey, this is the land of flojera... we don't want to be slaves to a schedule). Each episode will be hosted by Eric Partney (a local real estate agent), filmed by our exceptionally competent cameraman Erich Briehl, and produced by the Working Gringos. We will bring you behind the wooden and wrought-iron doors to see how people are living in the White City. So be prepared for surprises! The first episodes feature houses renovated and inhabited by fellow expatriates... but that may not always be the case. Our first few houses are in the centro, but that too may change. If we have learned anything living here, we know that the houses of Merida are as surprising, magical and unique as the people who live in them. And so we intend to bring you a series of episodes with a wide range of houses of all sizes, types, colors and locations.

Episode One of The Houses of Merida

When we first moved here, we used to walk by the house featured in Episode One and think how beautiful it might be if only someone would renovate it. Seven years later, we are rewarded with our visions come true! This house has been renovated in a way that shows its original beauty, while still looking fresh and modern. In this case, the facade is as exquisite as the interior of the house. The facade windows are as elegant as the ceilings inside are high, the columns are ornate, and the arches are myriad. The polished cement floors and bright colors lend a cheerfulness to the outdoor lifestyle that was probably absent in the original version of this home. The stone walls and fluted columns are fitting remembrances of the past, complimented by a rich art collection on the walls and functional but European-styled furniture. The photos on this page give you an idea of what the house looked like before it was renovated. You can see that the beautiful columns and arches were in the original home, but pretty much everything past that is new construction. 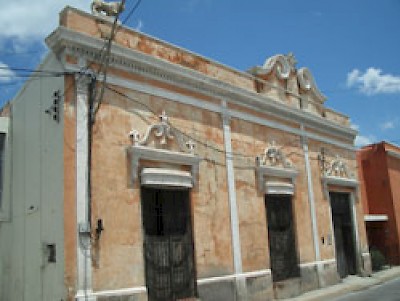 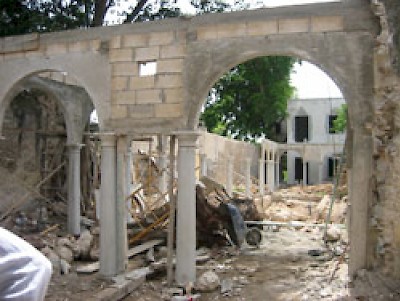 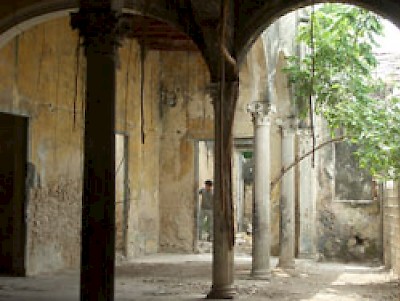 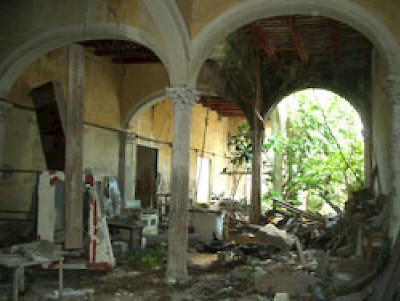