Legend has it that Hacienda Sac Chich was built and owned by a general in the Mexican Army, a soldier at heart who built his country home to look like a fortified castle. Many years later, the ruins of what was once a beautiful home were rediscovered and bought for a song by a sculptor from New York and his Chilean/German wife. They took what were essentially ruins and turned two parts of a house, connected by a covered outdoor area, into a huge studio and storeroom on one side, and a living area with two bedrooms, a bathroom, kitchen and living room on the other side. In the garden, they added a swimming pool. The female part of the original renovation team, Josefina Larrain, later divorced and remarried to Salvador Reyes Rios, the architect of our newly-purchased home in 2002. They invited us to a party at the hacienda, making Sac Chich the first hacienda we ever had the pleasure to enjoy up close.

The event in question took place on a lovely summer evening, with chairs set out on the lawn between the two casas. New friends and a larger number of strangers were mingling about the lawn, chatting and eating. We wandered around the garden and in and out of the buildings, in awe of the high ceilings, thick walls, fairy-tale structure and unique living spaces. We walked under the arched passageway in the garden, encrusted with a seashell inlay design that is there to this day. We (well, one of us) climbed the chiminea, because it was there and we could, spiders not withstanding. We basked in the sunset and reveled in the slow reveal of stars as tropical night fell all around us and the frogs and insects began their evening song. We loved every minute and every inch of Hacienda Sac Chich then, and frankly, it has only grown more lovely over the years.

Fast forward eight years, and here we are again. This time, the hacienda has new owners, who split their time between Northern California and the Yucatan. They have employed Salvador and Josefina to renovate the previously unrenovated structures, and to expand Hacienda Sac Chich into what was once the drying fields for the henequen fiber that was extracted in the casa maquina. All of Salvador's and Josefina's skills and experience have been brought to bear here, as they preserved some rooms, renovated and updated others, and then finally, built a completely new home in the middle of the fields, using some of the traditional Maya and Colonial era materials and techniques to create a modern masterpiece. In a sense, looking around Hacienda Sac Chich, you can see the growth and development of Salvador's architectural skills and interests, and Josefina's garden and interior design skills.

Hacienda Sac Chich is actually just half of the original hacienda. The original casa principal has a different owner and stands apart from the subject of this video. Our Hacienda Sac Chich is actually the casa maquina, formed in a "C" shape, with two enclosed wings (one for machines, one for storage) that flanked a raised and covered platform which once housed the main disfibradora (the machine that took the fibers out of the henequen spears). This entire structure has had the magic wand of architectural renaissance waved over it, and has become a five-bedroom, four-bathroom country home, all centering around a lovely outdoor living and dining area. In the center of the two houses, it is possible to lounge in a hammock or on a couch, sit in front of an open-air fireplace, or eat a meal at a dining table for twelve... all while surrounded by a lush garden tiled with ankle-level lily ponds, and the attending butterflies, dragonflies and birds that watch over them. An enclosed spiral staircase mimics the old water storage tank, providing stairs to a roof outfitted for stargazing.

And then, when you think you've seen it all and it's perfect and, you know, you feel you wouldn't have any trouble just moving right in... then you peer through the old stone arch to the former drying fields. You cast your gaze past a soccer pitch of manicured lawn to a simple glass-and-cement jewelbox at the other end. It's dramatic, breezy, clean, smooth and peaceful. Of course, you have to go there. The house draws you across the lawn. Once you get there, and you open all the sliding glass doors, removing the walls to the outside, the house doesn't really speak to you. It sighs. It protects and comforts you as you sit there, listening to the teeming life that surrounds both of you. It is a jewelbox, but you are not the jewel. Maybe you are the ballerina in the jewelbox, peacefully twirling in your mind as the birds, insects, animals, trees and wind serenade you with their neverending song.

Even when carrying heavy cameras, tripods and other equipment to record this video, we found ourselves bewitched by the silence of this place, lulled into meditation and reverie. We would film Eric saying his lines, then stop and watch as a bright red dragonfly hovered above a water lily. The wind would blow, creating a Welcome-Home parade of golden leaves that would swirl and settle on the sea of green lawn. Bright yellow birds with black wings swooped by. Translucent pink flor de mayo blossoms stared up at us from expanses of perfectly smoothed cement floors where they had fallen. "Oh! are we filming? Yes, yes... sorry. Where were we?" We can only imagine what it would be like to spend an entire week in the arms of this architectural siren.

We hope you enjoy this introduction to Hacienda Sac Chich as much as we have enjoyed this particular hacienda over the years. Now that it has a spiral staircase and a bocci ball court, it is a bit more sophisticated than it used to be. But in the end, after you've slept in the cotton sheets and wondered at the architectural marvels, the fact that it doesn't get in the way of enjoying the surrounding nature is one of the things we love about it the most.

Both Hacienda Sac Chich and Casa Sisal are available as vacation rentals. Find out more on their website. 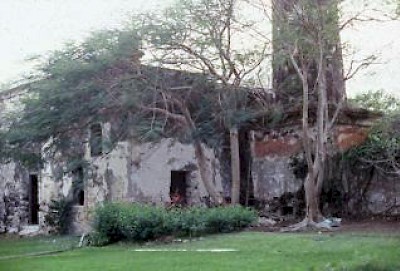 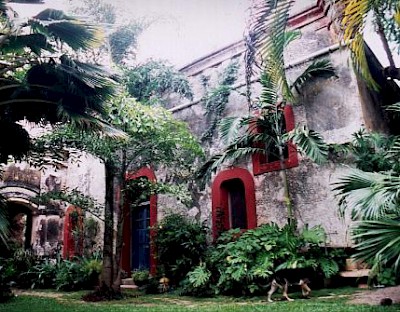 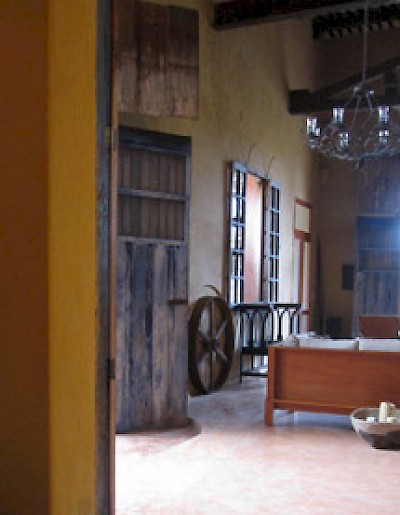 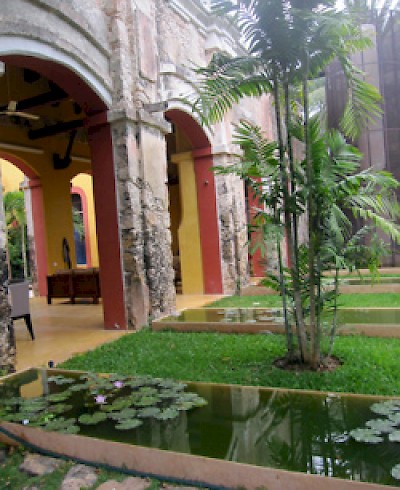 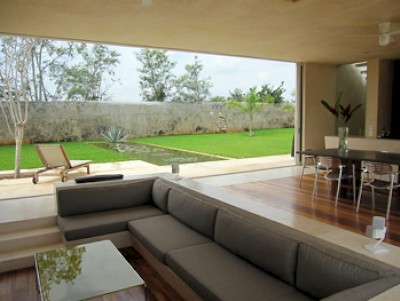 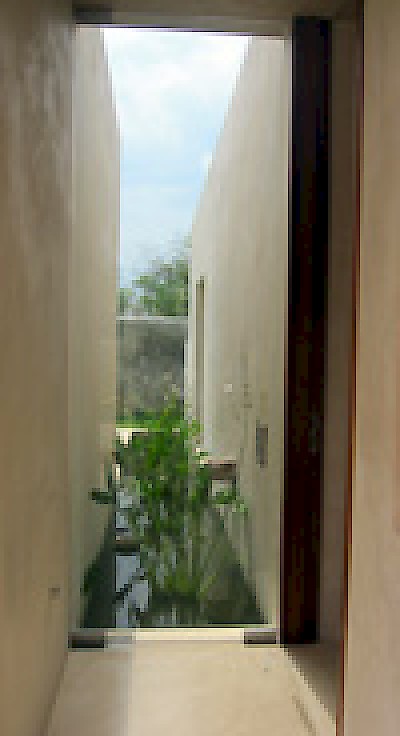