South of the Plaza Grande = SOME

In the last few years, more and more extranjeros are finding and buying colonial homes south of the Plaza Grande. When we first moved here, we were warned that "the south" was a place that was dangerous and not a place that we would want to live. No longer dangerous, and full of colonial homes at lower prices, SOME (pronounced "SO-may", short for South Merida) as we sometimes call it, has become a fashionable place to buy and renovate.

Areas like L'Ermita, San Sebastian and San Juan are all south of the Plaza Grande. While the streets are often not as elegant as in places such as the Santa Ana district, living in SOME provides some of us (Working Gringos included) with a chance to buy larger homes or homes for less money that are every bit as beautiful and interesting as the ones of our uptown neighbors. An added bonus of living in these neighborhoods is the chance to experience authentic Merida life, with all its quirks, problems and delights. Some of these neighborhoods are the sites of city-sponsored music performances, and L'Ermita, with its beautiful old church, garden and park has become one of the most important areas to visit during Day of the Dead here in Merida.

The home we chose for our sixth episode of Houses of Merida is located on Calle 60, a few blocks directly south of the zocalo, which puts it a few blocks east of San Juan Park. The neighborhood includes lumber stores, ice cream shops, schools, cocinas economicas and during the day, the streets are bustling with the business of Merida. Next door to this particular house is an art gallery, and the street is lined with old colonial buildings, many of which have been repurposed into commercial spaces. We don't call this area SOME for nothing... it is reminiscent of New York's SOHO district before it became the upscale enclave that it is today.

The colonial home that is the subject of our latest Houses of Merida video was in a typical sorry state of disrepair and neglect when the owner bought it. Designing it long-distance with architect Victor Cruz, he created a home that we think is exemplary in its preservation of the feel and charm of old colonial houses, while still providing the comforts of the 21st century (air-conditioning, hot water, dishwasher, swimming pool, etc.). The owner and the architect worked well together to keep all the old mosaicos, the old wooden doors, and many of the iron windows. Even when rooms were built from scratch, like the kitchen, they were designed in a way that blends seemlessly with the older rooms.

This home was built as a second home or a vacation home for one person and his guests and friends. The simple four-room square house at the front of the lot was preserved almost exactly, though the rooms were repurposed. An open area between two structures was turned into the kitchen, and the back structure was turned into three bedrooms with two bathrooms. An open patio on the side of the lot provides access to the outdoors from all but the two front rooms, and another patio was added in the back, lined with arches and columns looking out to a backyard with a lawn and garden. In the very back of the property, they built a pool and a poolhouse, while managing to preserve the mature palm trees that they found there. The entire property is surrounded by old stone walls, some of which were added to in the back to make them taller.

Three of the most sought-after features in a colonial home in Merida are probably the original mosaico pasta tile floors, original wooden doors and tall, beamed ceilings. This house had all three, and all three have been renovated and preserved. In the front rooms, for instance, they preserved the original mosaico tapetes (the tiles in the center of the room that form a kind of "rug"), but removed all the dark surrounding tiles and replaced them with newly-minted light-colored tiles, giving an entirely new look to the rooms. There are original wooden doors throughout the house, matched by some additional doors that look as if they are old but were created for the house by local craftsmen. The beamed ceilings in many of the rooms only had to be cleaned and repainted (and probably also needed minor repairs). Even when certain iron doors were replaced, most of them were repaired and repurposed, sometimes delightfully, as in the master bathroom.

The owner, who is a designer from New York, has an eye and an appreciation for antiques and other memorabilia from Merida and other parts of Mexico, so the house is decorated with a bevy of interesting objects. Every single light fixture was purchased from local antique and junk dealers. Many of them are blown glass hanging fixtures, fairly common in older Merida homes, and some are wrought iron fixtures which the owner painted white instead of the traditional black. The handles to drawers in the kitchen and bathrooms are also from local antique and junk stores, and at least one of the bathrooms has an old porcelain sink and toilet, complimented by newly-made mosaico tiles created in the same Caribbean blue.

When you are in this house, you feel you are definitely in Mexico and in the Yucatan, and if you look around you in most rooms, you won't be able to tell what year it is. Is it 1920? 1955? 2010?. The combination of architecture and interior design leaves you pleasantly unsure.

For information on mosaico tiles (old and new), how they are made and where to buy them, visit our article on Mosaicos. 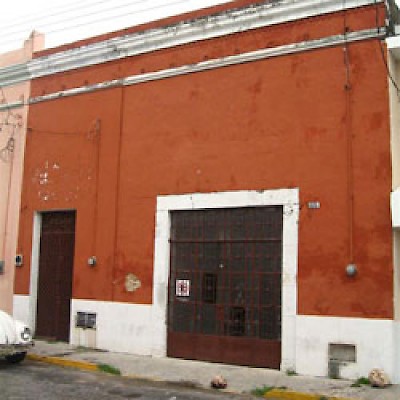 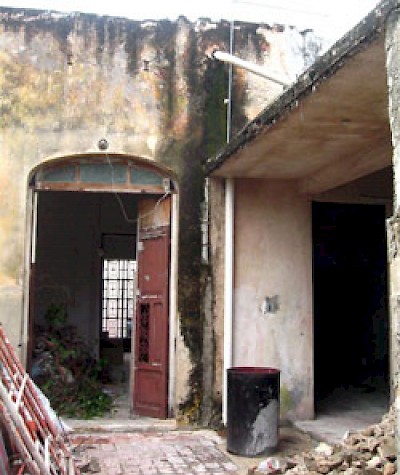 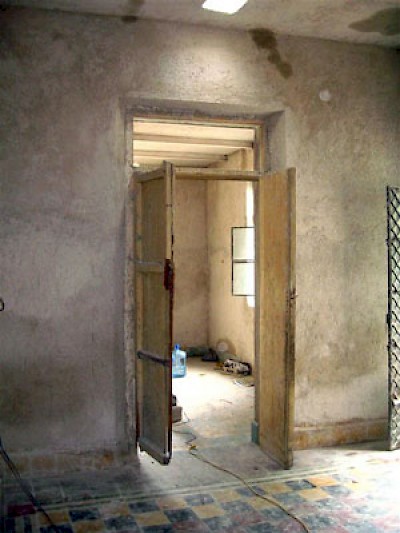 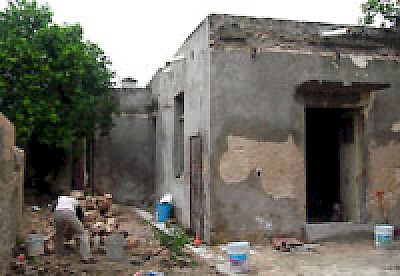 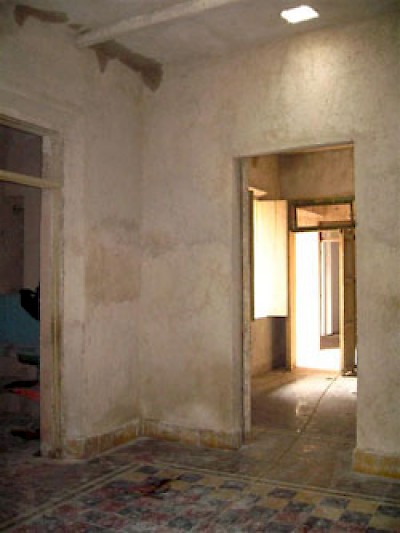 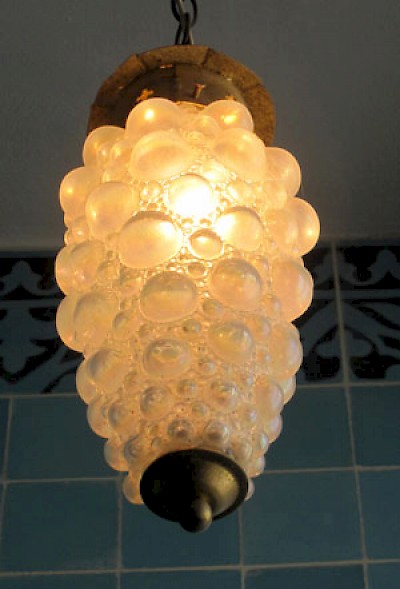 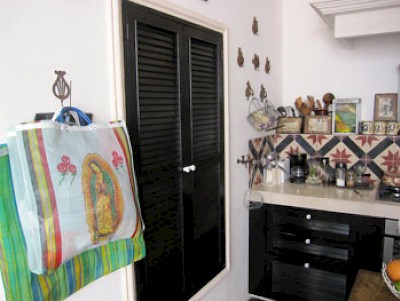