He shows up mid-morning on a noisy casi-vintage motorcycle, his pouch between his thighs and handlebars. He wears a helmet now, ever since they enacted a law requiring it for all motorcyclists here. And he blows his whistle very loudly.

We'd always heard that the mail in Mexico doesn't work that well. And it does take longer for things to get where they are supposed to go when you use it. But we like the idea of supporting our local mailman, or cartero.

Last week was the Dia del Cartero. A week before, the mailman came to the door and handed us this card. It announces the day, and then says how nice it would be if you gave your mailman a tip. Well, actually it says, Gracias por su Estimulo, which in our Spanish/English dictionary translates into "thanks for your stimulus, incentive or encouragement".

So on the big day, we had our envelope waiting. We could hear him coming from down the street, the high-pitched whistle stopping at each door. And the motorcycle rumbling along the sidewalk; yes, he rides his motorcycle down the sidewalk... Finally, he comes to our door and whistles. We open the door, thank him for the day's mail, and ask if we can take his picture. "Claro que si!", he says. He poses. We show him the picture. "Muy guapo!", we say. "Very handsome!" He agrees, thanks us profusely for the tip, and continues on his way.

And as we go back to work at our computers, bringing the Yucatan to the internet, we can hear the mailman as he continues along his route, with his little whistle sounding "far and wee". 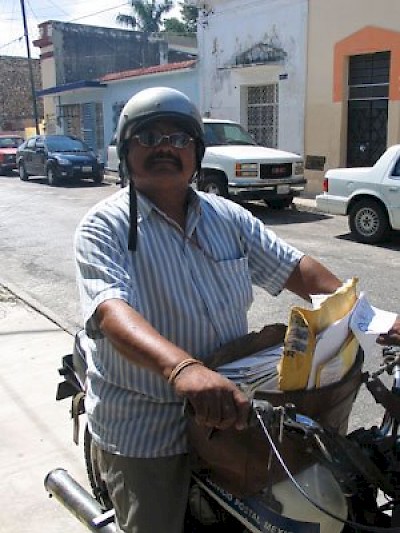 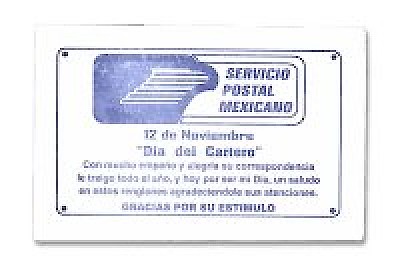 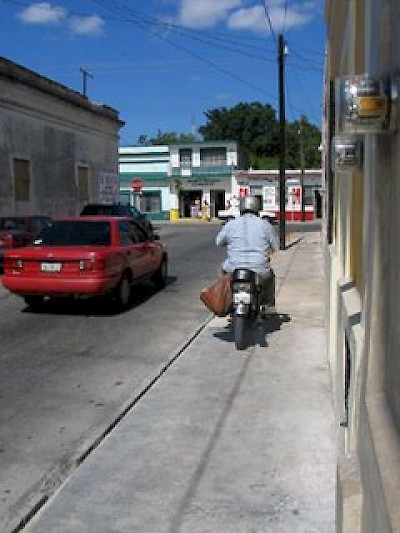