Editor's Note: Our good friend, John Venator, who (with his lovely wife, Dorianne) owns Casa de Los Venados in Valladolid, was lucky enough to attend the Red Bull Cliff Diving event this past weekend as it was happening at a cenote near him. This is just another example of the kind of things that happen when you are lucky enough to live in the Yucatan! We hope you enjoy his first-person account.

Earlier today, (Sunday, April 10th) I drove to Cenote Il Kil near Chichen Itza to watch the Red Bull Cliff Diving Competition, which was held at the same site last year as well. Il Kil in Valladolid, Yucatan, Mexico, is one of seven venues around the world for this event, which also takes place this year (2011) in Chile, France, Italy, Boston, Yalta, and Greece. At the other venues, tens of thousands of spectators attend, but at Il Kil there were only a couple hundred people at best. Why? First, Red Bull purposefully did not publicize the event at Il Kil to prospective attendes as there are only very limited places around the top of the cenote which offer any kind of a view of each dive. Red Bull did not want to disappoint Red Bull customers, who might want to attend. In some of the other venues the diving is out in the middle of a large river, lake or at an ocean front location with great vistas of the event. But this event was an intimate affair.

Then why would Red Bull still hold the event a second year in a row at Il KIl? The answer is that the divers love it and the videos they shoot at Il Kil are some the most dramatic ones they get each year! Also, Il Kil cenote is warm water (at some other venues the water is as cold as 16 degrees centigrade), the water is "sweet water" not salt or brackish, the water is 39 plus meters deep and the surface is calm. There are no fluctuating tides or wave actions to complicate their 27.25-high meter dives into the cenote. This is according to Kent De Mond, a 28 year old competitor who was born in Potomac, Maryland (one of only two American competitors) and who has been on the Red Bull circuit for four years now. I also spoke with Michal Navratil, age 26, who was born in Prague in the Czech Republic and who has also been on the Red Bull Circuit for four years. They are two of the twelve competitors who have to earn the right to compete each year in this unique event.

Who Gets To Dive?

The top six winners of the entire series of seven events each year, the ones with the highest number of points, are automatically asked to return the following year. The remaining six must re-qualify by attending a diving "boot camp". This year the boot camp was held in Australia. Also attending the boot camp were six "wannabees", promising young divers who have been selected by Red Bull scouts, most of whom are former high divers themselves and who often also serve as certified judges for some of the high diving competitions around the world each year. This year, four of the previous year's bottom six divers re-qualified and two new competitors were added to the twelve divers who make up the 2011 roster. These twelve divers travel around the world, competing in the seven venues for the top prize.

I have seen the cliff divers in Acapulco many times, as we have friends who have a home there that faces the ocean inlet where the divers perform. The Acapulco dives, while quite dramatic, are basically swan dives into the ocean surf as that is all that is safe in that location. These dives are visually enhanced at night when the divers hold flaming torches as they plunge into the water. The cliff diving at Il Kil was even more interesting to watch!

In the Red Bull Dive Competition, divers can choose the style of dive they wish to perform. The Red Bull cliff divers are judged by five individuals who are sanctioned and certified by one of two world wide high diving bodies and judge the divers on the degree of difficulty of each dive. The degree of difficulty must be at least 3.6 each, and the diver must tell the judges in advance what combination of acrobatic feats will be included in each dive. This allows the judges to score them accurately, from 1 to 10 points on each dive. If you have watched the high diving competition at the Olympics on TV, you have a pretty good idea of how the scoring goes. There are five judges and the highest and lowest of the five scores are discarded. The remaining three scores are averaged and the diver accumulates those points through the series of required dives. Then, the 1st, 2nd and 3rd place winners are the ones with the highest number of total points.

The divers are paid an "appearance fee" which basically consists of having all their travel, lodging, meals and incidental expenses paid. The Red Bull team stayed at the Mayaland Hotel while they were competing at Il Kil. If this is an indication of how they are treated, then these twelve divers are getting a top-flight, all expenses paid sojourn around the world. The first, second and third place winners at Il Kil also received a trophy and the first place winner received a cash prize of 4,000 Euros. The other two prize winning divers receive cash prizes as well, in descending order. We're sure the money is more than welcome by these competitive athletes, but we wonder how they fit those trophies in their suitcases!

The fearless gracefulness of these divers is awe-inspiring! Their Speedo-clad well muscled and chiseled physiques resemble those of gymnasts and acrobats. The truth is, their physiques and their training much more resembles those of gymnasts, rather than swimmers. Swimming if important, but incidental to what they are competing for and being paid to do.

The event at Il Kil for those who were either lucky enough to just accidentally show up, or for the few of us who purposefully came to see it, was anything but disappointing. The winners certainly deserved it, but they all competed beautifully. Check the links below for the results of the event, as well as additional photos and videos.

I asked several Red Bull executives when their cliff diving competition will be held at Il Kil in 2012, as I wanted to include those dates in this article so Yucatan Living readers could add it to their calendars, but Alas! the news is not necessarily promising.

At this point there are no plans in place to bring the competition back to Il Kil for a third year. Maybe yes - maybe no. If it does not come to Il Kil, A Red Bull event planner said they will still have an event in Mexico - but possibly in some other venue. Since there are hundreds of cenotes in Yucatan, we can still hope that the event will return to our area.

This event was meant for the camera lense. The aerial acrobatics of the divers seduced the camera lense, just like video antics of the extreme snow skiers. Check out the Red Bull Cliff Diving link below and watch the numerous video clips to see the actual dives. The clips not only show the incredible action of a number of dives from Il Kil and other previous sites, but also there are interviews with each of the twelve divers on the Red Bull circuit, as well as important statistics and complete biographical profiles of each of them.

Wow - what a day! I was lucky to have a front row seat at this amazing event (in fact, in that photo on the left, I'm the guy below the diver in the blue shirt). And just a little footnote: other than the $75 pesos admission price to get into the Il Kil cenote grounds, there was no additional ticket to be bought for this event. Yes, that is right... watching the Red Bull Cliff Diving Competiton was totally free of charge. I was lucky enough to watch this phenomenal exhibition of almost dance-like aerial acrobatics with the divers plunging at 60 miles per hour before they hit the water.

Just another wonderful day in the Yucatan!

Thank you to Bryan Black, who lives on the Mayan Riviera in Mexico, for the beautiful photographs in this article. You can see more of his excellent work (and even book him to take photos at your wedding or other special occasion...) at the Black Swan Photographers website. 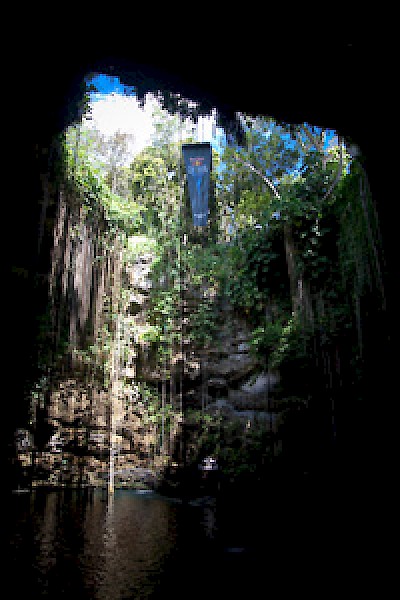 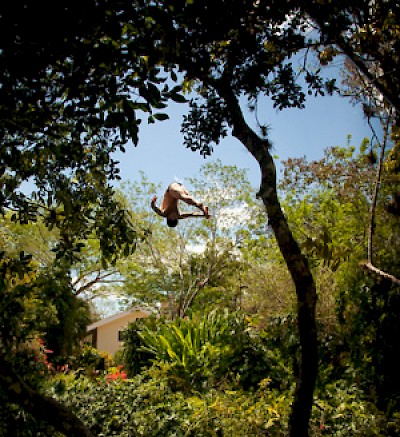 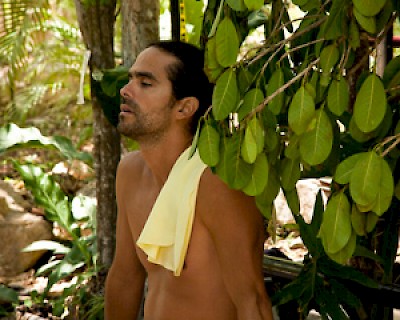 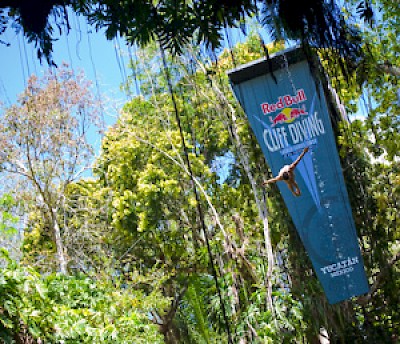 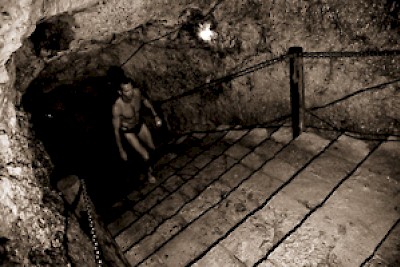 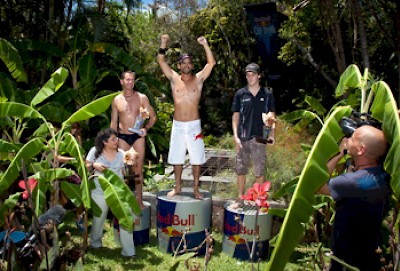 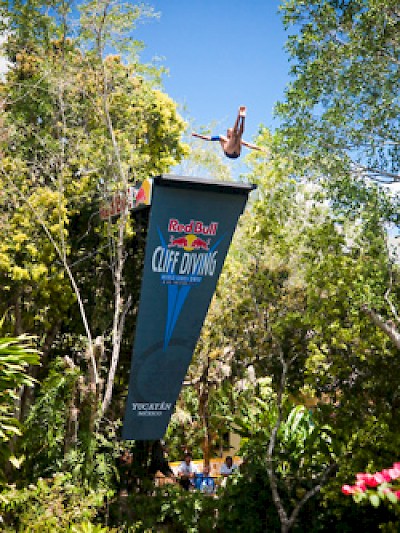