These words used to conjure up visions of Hare Krishna, orange robes and George Harrison for us, but now they mean something totally different.

In the rest of Mexico, they have posadas, ritual walks through the streets with candles and song, children dressed up like Mary & Joseph, visiting neighborhood houses and being "refused a place at the inn" in remembrance of the journey so long ago in Bethlehem.

Each night during Advent (the 24 days leading up to Christmas), children of the neighborhood travel from door to door singing a song and collecting money. With them they carry las ramas as well as a picture of the Virgin of Guadalupe, somehow set up with a candle. In the case of our young visitors the other night, it was a little box, with flowers and candles in front of the Virgin. Our employee Fernando who is 24 years old tells us that he used to take big empty cans and cut out both ends. On one end he would put a picture of the Virgen and then he would stick a candle in the other end to make a sort of light box. He has promised to have his sobrinos (cousins) make one for us.

In this tradition, the children go door to door in their neighborhood, singing this song. They sing or shout it very quickly so that its almost impossible to tell what they are saying (to these gringos, anyway), so we had Fernando write it down for us:

Me paro en la puerta (I stand in the door)
Me quito el sombrero (I take off my hat)
Porque en esta casa (Because in this house...)
Vive un caballero (lives a gentleman.)

If you give them a little money (which of course we did...), they sing:
Ya se va la rama (The rama is going now...)
Muy agradecida (very grateful)
Porque en esta casa (because in this house)
Fue bien recibida (it was well received.)
Pases buenas noches (Have a good night)
Esta le deseamos (this we hope for)
Pase buenas noches
Nosotros nos vamos (we're going)

If you don't give them money, we hear they yell at you:
Ya se va la rama (The rama is going now...)
Muy desconsolada (very desconsolate)
Porque en esta casa (because in this house)
No la dieron nada (they didn't give anything).

Fernando also tells us they hurl insults at you, and possibly limones, at that point.

The first night, these three adorable girls came to call. The next night, they came again, and another group from across the street (all brothers and sisters) also came. They come about 7 pm and we aren't always here at the office that late. But Fernando tells us they will be back every night until Christmas Day. So we're saving our coins. On reflection, this tradition seems to combine Christmas and Halloween. The kids go to the effort of putting together a little show (very little, in the case of our second group...) and performing a song. If they get their treat, everybody wins. But if not, tricks and insults and limones start flying.

Where does the money go, you ask? To buy firecrackers and candy, of course!! 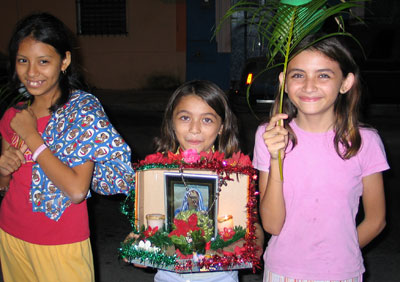 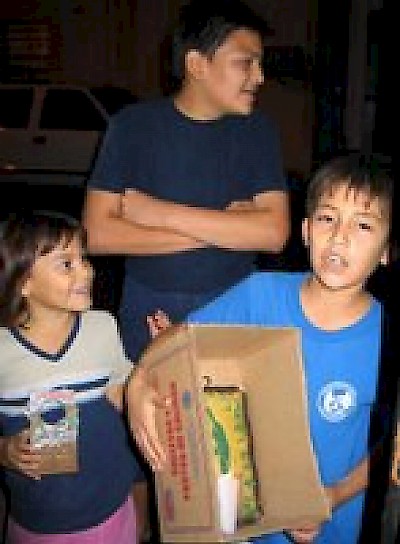 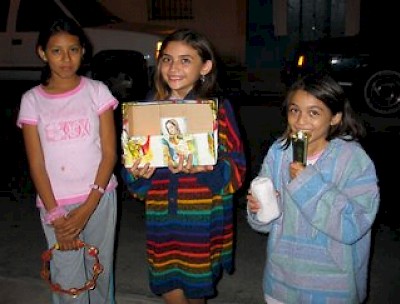