Festival of the Virgin, Isla Mujeres

Those of us who live in Mexico or travel there frequently know that there is a fiesta somewhere in Mexico every day. On many days there are multiple fiestas occurring across the country. Some of our favorites are Semana Santa around the time of Easter, the Posadas at the end of the year, and Day of the Dead at the beginning of November. Now, we have added another festival to our list of favorites. It is the Festival of the Virgin of the Immaculate Conception, an official religious holiday in Mexico with a fixed date of December 8th.

We think there is absolutely no better place to celebrate this festival than on Isla Mujeres, as the Virgin of the Immaculate Conception is the island’s Patron Saint. Now is the time to start making plans to participate in the celebration this year, so mark your calendars and make your reservations. According to Mr. Eyder Jahil Hoth, the Secretary for Tourism on Isla Mujeres, the event begins on November 28, 2012 and culminates on the official religious holiday date of December 8, 2012.

In addition to being there to witness the fiesta, we think you´ll find that this is the perfect time of the year to spend a few days on Isla Mujeres. Hurricane season has ended and the weather is beautiful. Average daytime temperatures are in the high 70s to low 80s and during the nights the temperatures are in the mid-60s. December is in the heart of the dry season with total precipitation averaging less than one-half inch for the month. The relative humidity drops and clear blue skies with puffy white clouds are the norm. A regular soft breeze off of the Caribbean makes the island a true tropical paradise. Although uncommon, a cool front the locals call a norté occasionally passes across the island (and the whole Yucatan Peninsula), so be prepared with a sweater or light jacket.

The Story of the Patron Saint

An image of the Virgin of the Immaculate Conception is the daily focus of the celebration that we were lucky enough to attend. Her statue spends most of the year in a nicho inside the Church of the Immaculate Conception located on the main square on the island. The most widely accepted historical account of the statue’s origin was written by Enriqueta M. de Avila and was published on one of the island´s internet sites, Isla-Mujeres.net.

“More than 100 years ago in 1890 in the ancient colonial settlement of Ekab (Boca Iglesia) at the northern tip of Quintana Roo, several fishermen (one, My father-in-law, Christiano Avila Celis), discovered three “sister” statues of the Virgin. They were carved out of wood with their hands and face made out of porcelain. And so it was said each one of the fishermen believing so strongly in the Catholic religion carried a Virgin to his own village. It was also said that the Spaniards had brought the “sisters” to Ekab many years before in about 1770. On Isla Mujeres, the Virgin’s first shrine was a small palm and wood Chapel and at a later date moving “Her” to the place that “She” presently occupies in the church was not easy. More than eight men could scarcely lift her…upon finally moving “Her”, the small palm chapel burned down completely to the astonishment of all those present. It is said that the Virgin walks on the water around the island from dusk to dawn looking for Her “sisters”. Some years ago an Islander saw the Virgin walking on the sea early in the morning. Later that morning her dress was found to be contained with burrs and sand.”

There is also a legendary story told by some of the older fishermen on the island. According to the story, a group of fishermen far from shore were suddenly engulfed in a powerful squall with high winds and blinding rain. It seemed as if they would certainly perish. The fishermen prayed fervently to their Patron Saint for deliverance from the storm and for their safety. Shortly after their prayer, a pale image of the Virgin appeared over the water and calmed the sea. Some religious officials have noted a similarity to the New Testament Biblical scripture in Mark, Chapter 4, verses 35-41, when his disciples awakened Jesus during a bad storm. He rebuked the wind and said to the Waves, “Quiet!” Be still!” Then the wind died down and it was completely calm.

The origin of the statue from Ekab (Boca Iglesia) certainly makes historical sense. Francisco Hernández de Cordóba, the Spanish conquistador sailing from Cuba in search of gold and Maya slaves was the first European to visit Yucatán on an official visit in March of 1517. When he arrived at the Maya city of Ekab, he found a large urban settlement that the Spanish named Grand Cairo. It was described as being larger than Sevilla, Spain and possessed beautiful temples, pyramids, warehouses full of fine cotton, and other structures. The reception for the conquistador and his men went badly. After luring the men into the jungle, the Maya ambushed the group. Several Maya warriors died from the Spaniards´ musket fire and crossbows, and two Spanish soldiers were killed. Francisco Hernández de Cordóba was critically wounded and died from complications after his return to Cuba.

Some years later the Spanish subdued the Maya, and established a permanent settlement at the site, which they called Boca Iglesia. They built a large Catholic church using cut stones from the previous Maya city, as they did in many other places throughout the Yucatan Peninsula. Although the church is still standing, and its belfry can be seen from the sea, it is in poor condition. It seems reasonable that the Spanish brought the three statues of the Virgin to Boca Iglesia in the late 18th century, where the fishermen described in Enriqueta M. de Avila’s story discovered them. One was taken to Isla Mujeres, another to Kantunilkin, and the third to Izamal.

Today, only 26 people live in Ekab/Boca Iglesia, which is part of the government municipality of Isla Mujeres. It is accessible only by boat. The jungle, hurricanes, the salty air, relentless sun, and fortune hunters have destroyed most of what was a great Maya city and later a historical Spanish colonial settlement.

The Festival of the Virgin of Immaculate Conception

As mentioned earlier, in 2012 the festivities begin on November 28th. After a 7:00 PM mass, the Virgin will be removed from her niche in the church, as she is every year, and carried through the streets of Isla Mujeres. This is known as the bajada, literally ´the lowering´. Sometimes, up to two or three thousand participants attend the opening event.

The celebration continues throughout the eleven days of the festival with a daily mass at 7:00 PM. Each day different clubs or groups are featured participants in the street parades with the Virgin. Some of the groups represent tourist associations, the elderly, youth clubs, colonias, and the fishermen’s cooperatives. Many of the parade participants wear colorful embroidered dresses or guayaberas. Some carry flags, candles or flowers. Firecrackers explode throughout the day and night. Cotton candy, ice cream, and toy vendors ply their trade in the crowded streets. There are numerous street stands selling tacos, tortas, marquesitas, elotes and various beverages. Music and dance performances are given throughout the festival. Some homes display beautifully decorated altars dedicated to the Virgin.

In our opinion, the final day on December 8th is the best day to celebrate. In the morning, there is a 10:00 a.m. mass with first communion for some of the island children. The children return at 3:30 p.m., and join other local citizens as members of the fishermen's cooperatives carry the statue of the Virgin through the streets until it reaches the ferry pier on Medina Avenue. Here, the statue of the Virgin is carried onto a large boat accompanied by religious dignitaries, local citizens, and tourists. The boat departs from the pier in the soft evening light for an hour-long cruise in the waters off the coastline of Isla Mujeres. Scores of smaller boats with fishermen and their friends follow the Virgin’s boat in a large flotilla. Many of the boats are decorated with flags, crosses, and images of the Virgin. The flotilla returns to the docks as one of Isla Mujeres famous sunsets frames the island in brilliant colors.

A solemn line of participants returns the Virgin to the church for a 7:00 PM mass terminating the religious portion of the celebration. With the Virgin safely back home, the party begins! All across the island, isleños (residents of Isla) begin a night of celebration that lasts until the wee hours of the following morning.

Tourists can participate in almost all aspects of the festivities, including riding on the Virgin’s boat for free. It is difficult to find a group of people who are more friendly and welcoming than the isleños.

What´s even better is that if you time it right, you can spend a few days on the lovely island of Isla Mujeres celebrating the Virgin of the Immaculate Conception, and then travel a few hours west to Merida where, on December 12, you can watch runners and bicyclists join together from all over the Yucatan Peninsula, and even other parts of Mexico, to celebrate La Virgen de Guadalupe!
****
Read more at Isla-Mujeres.net
Want to know what happens on December 12? Watch this video about La Virgen de Guadalupe!
This article was written by Byron D. Augustin and Rebecca A. Augustin, formerly from Texas and now living in Valladolid. 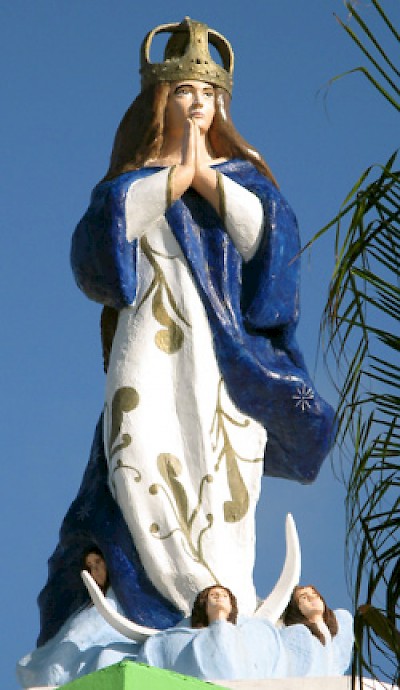 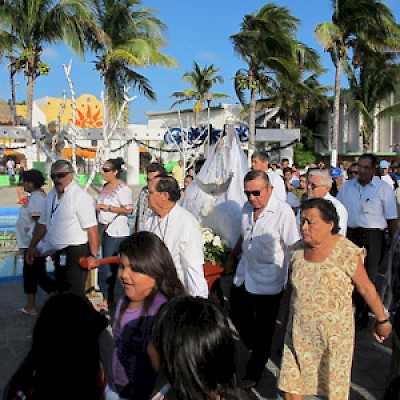 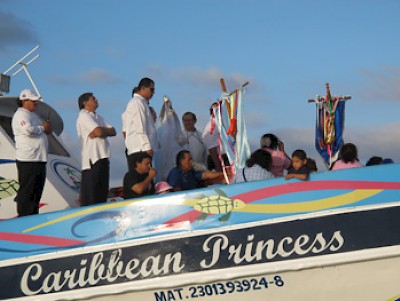