CULTURE / From the Archives: El Juli in Yucatan Email & Share

From the Archives: El Juli in Yucatan

Julian Lopez Escobar, known as "El Juli", was a child prodigy of the bullring. He began his career at the tender age of six and became the youngest Matador de Toros in history by fifteen. Although born in Spain and trained at the Madrid Academy of Tauromachy, he achieved the status of Matador de Toros in Mexico because he was too young under Spanish law. For this reason, he has often toured the Plazas de Toros of Mexico, and on January 31st, 2003, he came to Monumental Aviles, the bullring in Motul, Yucatan.

We knew nothing of El Juli and very little about bullfighting at the time, but our neighbor Ramon, who as a young man had worked at the Plaza de Toros in Mexico City, encouraged us to go. To help us understand and perhaps even appreciate what La Corrida (bullfighting) was all about, he gave us the book, Or I'll Dress You In Mourning, which is the biography of "El Cordobes", the most famous torero (bullfighter) of the last century.

La Corrida is one of many Spanish traditions brought to Mexico after the conquest. It is probably the last public ritual animal sacrifice practiced today in the western world. It is pageantry, theatre, sport, metaphor and an acquired taste for very few gringos aficionados. We were captivated by the El Cordobes biography and joined Ramon that day in Motul, bringing our cameras along as always.

About two years later, El Juli suffered a "grave" goring of his right thigh, which is a common cause of fatality in toreros if the femoral artery is cut. He quickly recovered, but over the years, he has had numerous conflicts with his managers and promoters. At one point he sued Shakira over unauthorized use of his performances in a music video. These controversies, and maybe the effects of too early fame and achievement, eclisped El Juli's star for a time.

On January 31st, 2010, exactly eight years after we saw him, El Juli staged a "triumphant" return to Mexico at the Plaza de Toros Monumental in Mexico City before a crowd of 35,000. Quite by coincidence, while looking for blank tape stock, we "discovered" the video we took that day in 2003. After some editing to conform to YouTube's 10 minute limit, we are posting it for those few gringos aficionados and Yucatecans who may appreciate it. For anyone else, please do not watch this video nor leave the usual comments. We already know. 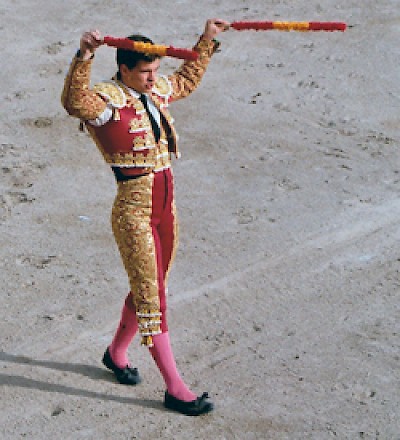