The Working Gringos were working in Cozumel today. Yes, we really were. This week, we are researching Cancun, Cozumel, Playa del Carmen, Tulum and places in between to update a travel guide for this area. It's rough work but someone has to do it, right?

So today was Cozumel.

We traveled from Playa del Carmen to Cozumel on the 10 am ferry, arriving a little before 11 am. On the ferry ride, we rented a car from a nice young man, Juan Carlos, who set us up with a Jeep from Executive car rental. After finishing the deal, an American tourist offered some advice: "Be sure to take photos of the car before you drive away, or they will try to charge you for any damage." We thanked him for his "tip", but was yet again struck by the preconception that so many of our fellow gringos have that every Mexican is out to cheat them. It is a source of wonder to us that so many Mexicans continue to be so gracious in the face of this ongoing prejudice. Everything about the car rental transaction was professional and friendly today, from beginning to end, and we had, as usual, no trouble with the car, the car rental company or its employees.

We started by exploring and investigating hotels and restaurants for the guide book, finding it a little more difficult than usual to navigate Cozumel as many of the street signs have not been replaced since the hurricane. Some of the residential streets are blocked by construction, trenches or other signs of ongoing repairs. In general, it was obvious to us that the places that tourists see are being rebuilt quickly, but the residential areas are coming back a bit more slowly. As for Mother Nature, our impression was that the sea seems to have recovered completely, though the coral heads will take awhile to regrow. Many trees are sprouting leaves, and yet there are spots on the island that still appear quite denuded. And while some of the beaches are smaller or missing completely, many are as good or even grown to be better than before.

The malecon (Avenida Melagar, which runs along the western coast) has been rebuilt and the balustrade repainted. Everything there looks clean and new. The ferry terminal is still missing some roof tiles, but the rest of it looks great. The ferry dock itself ends right after the terminal and is being rebuilt. They may be running fewer ferries than usual becaue of the shorter dock, because it seemed that both ferries we took today were quite full. The main plaza, just at the end of the ferry dock on the far side of the malecon was beautiful and clean, and all the businesses there are open. The trees in the plaza are even looking green again and are obviously on the mend. We really didn't notice any damage in the center of downtown until we drove into some of the back streets.

As you go north or south from the town, however, you can still see damage and the construction that is going on to repair it. North of town, we visited some hotels, some of which were undergoing heavy repair, and others, like the Melia Cozumel, the Cozumeleno and the Playa Azul were repainted, repaired and back in business. The beach at the Playa Azul, for instance, is pretty small and rocky, but the water is clean, clear, aqua blue and completely inviting. The little horde of snorkelers off to one side of where we stopped for breakfast sure seemed to be enjoying themselves. Sadly, the La Cabana del Pescador Restaurant across the street was demolished.

South of town, there is a lot more construction going on. The Punta Langosta, the big shopping center built for the cruzeros, the people who arrive from cruise ships, is still being worked on and is only partially open. At the moment it is a shadow of its former self. A few of the hotels to the south are still undergoing renovation or repair. Dive shops are open and the water was a hive of diving activity, although our favorite shop, Del Mar Aquatics, had lost their building and pier. They were working out of the Atlantis shop next door and using a smaller, temporary pier while their facilities were being rebuilt. Farther south, we visited some of the beach clubs, such as Mr. Sancho's Beach, and they were open and busy. The only sad exception was Chankanaab State Park, which was heavily damaged. The security man at the gate said they will not be open for another month, and it will take years to regrow the botanical garden.

"Do you think the Rasta Bar made it?", we wondered. She said, "It's still there." He said, "It couldn't have survived". Turns out we were both right. The Rasta Bar, also called "The Shanty", was two palapa-covered wooden huts perched on the southern end of the island, where Hurricane Wilma struck first. The original Rasta Bar palapa on the ocean side was pummeled, and is being rebuilt. It was once full of Rasta memorabilia and the walls had been written and scribbled on for years... they were full of happy memories of visitors with a beer in one hand and a marker in the other. The other palapa, on the island side of the road, survived and, as you can see in the picture, was doing a booming business today, serving loud reggae music, cold beers and endless sunshine and sea breezes. Visitors have started writing on the walls again and the spirit definitely survives.

While we were there, taking photos and soaking up the ambiance, we noticed a man selling hats and baskets. His name is Luis and he lives there. Luis said he learned his weaving skills in Acapulco. He had hats, visors and baskets made from woven coconut palm leaves. He also made grasshoppers and pajaros (birds) out of the same material. The baskets and things are bright green today, but he tells us they will age and turn "cafe" or brownish. He says they will still be flexible but they can also be varnished at that point to last longer. We paid him what he asked for for a basket (100 pesos... about $10 USD) and he was so pleased that we didn't bargain with him, he threw in two grasshoppers and a pajaro. We were thrilled with the basket, and happy to be able to help support a local artisan who, like others on the island, has suffered greatly from the effects of the hurricane and the additional effects of reduced tourism.

If you're considering Cozumel for vacation this year, don't hesitate. Many hotels, dive shops, bars, stores and restaurants are open and better than ever. If you decide to rent a car to explore the island, don't miss the Rasta Bar at Punta Sur. It's a little taste of Carribean Soul on the Mayan Riviera... what a great combination! And when you see Luis, buy a hat or a basket for the asking price and enjoy the result. We are on a personal mission to become generous gringos, spreading the reputation of gringos in Mexico as being generous and kind. 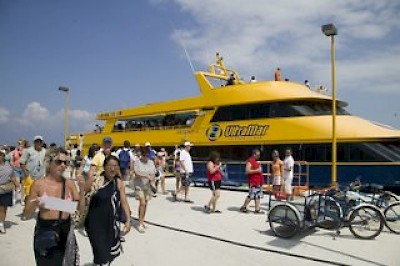 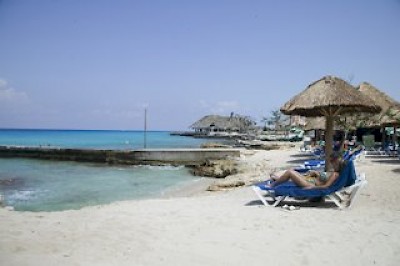 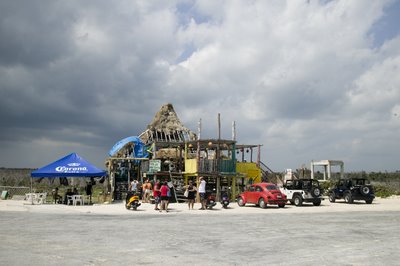 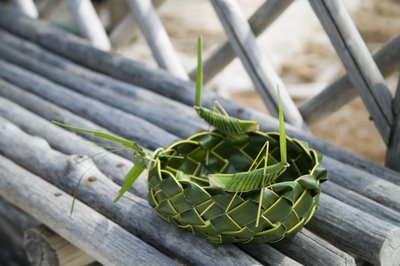