The centro historico of Merida is divided into neighborhoods called colonias in Yucatan, but referred to as barrios elsewhere in Mexico. Our first house in Merida was in colonia Santa Ana, north of the Plaza Grande, where many norteamericanos now make their homes. We later moved to colonia San Sebastian, south of the Plaza Grande. One attraction of this neighborhood is that it was originally the "Mayan quarter". Today it retains an authentic atmosphere and a Yucateco mestizo charm. Since then, many other gringos have arrived here in SO-ME (our nickname for South Merida), no doubt also drawn by the terrenos (plots of land) for lower prices.

It's A Wonderful Day in the Neighborhood

Each neighborhood in the centro has a colonial-era church and park. In each church is housed the statue of the patron saint. Once a year on the fiesta day of the saint, the statue is cleaned, given a new wardrobe and carried around the neighborhood in a religious procession called a gremio, complete with a band and the launching of voladores (fireworks) to ward off evil spirits (not to mention stray dogs and unsuspecting tourists). In San Sebastian, the saint is La Virgen de la Asunción, whose holy day is August 15th, when it is said the Virgin Mary ascended to heaven. The tradition in San Sebastian is to conduct a gremio every day, beginning on August 1st until the day before the feast day of the 15th. La Virgen is taken from the church on the first day and spends the night at a different local residence until she is returned to the church on the 14th. That's 14 gremios in a row, no doubt a record for any colonia in Merida.

The final gremio is called the Gremio de Mestizos and combines the participants of previous gremios with the local high school marching band and visiting dignitaries. In the evening (and every evening after a gremio) the residents and their visiting friends and families come out to enjoy the games and rides at the fería set up in the streets around the church.

This year, our neighbor Doña Guadalupe and family were in charge of picking up La Virgen from her evening residence and delivering her to the Gremio de Mestizos for the procession back to the church. Doña Guadalupe invited us into her home to accompany her group. Inside we met the children and the assembled mestizas wearing traditional huipiles, all serenaded by a three-piece gremio band sitting on the couch, waiting for the foot parade to begin. To help us endure the heat of the day, we were served ice-cold horchata, the popular rice milk drink of Yucatan, fortified with plenty of azucar.

We were told that Doña Guadalupe's family also had the honor of carrying the new clothes for La Virgen this year: a blue cape, a silver-embroidered white dress and a crocheted-shawl that they had made to add to her wardrobe. From start to finish we were treated like one of the extended family, welcomed in and encouraged to take all the photos and video we wanted.

The gremio that started at Doña Guadalupe's house wound its way to another neighbor's home, where La Virgen had been sequestered in the garage that looked out onto the street. Many of the young people shooting off the voladores and carrying La Virgen were wearing playeras (tshirts) that commemorated a friend of theirs who had been tragically killed in a car accident earlier this year. At every door, neighbors came out and watched the procession go by. Often the men were invited to join in by lighting one or two voladores themselves as the gremio went by.

At a corner near the church, our neighborhood gremio was met by a drum and bugle corp from the high school (go Panteras!) and more local residents, many carrying one of the forty-something estandartes (standards) of their respective gremios. Each of these beautiful tapestries are different, all of them created and embroidered here in the neighborhood for this traditional event, and some of them dating back to the early 1900's.

At this same corner, some of the important women and men in the neighborhood boarded four calesas, decorated for the occasion. They chatted and visited, looking like they were having a great time, while the rest of us waited in the hot sun. The band played on and on, but the parade was stalled. More waiting. More sun. We walked to the nearest tendejon for a bottle of water... no, they were all out of water. We settled for a very sweet orange drink that claimed to be 100% juice.

What were we waiting for? It turns out we were waiting for the most important dignitary of the day, Governor of Yucatan, Yvonne Ortega, who not only wanted to show her support for the local residents and Yucatan's traditions, but who, we were told, has a close relative that lives on the corner near the church. She was sporting one of her now famous Ibonica blouses, a contemporary revisioning of the traditional Mayan huipil. Yet even though the Governor of the State of Yucatan was there, it was still very much a neighborhood event.

The Gremio de Mestizos began parading through the streets, taking the long way around and back to the church. When the procession arrived, everyone entered, following the statue of La Virgen. Those already in the church cheered her arrival. The church officials were there to greet her and a mass was said. The church was packed and sweltering, so we left early... but we did get a chance to catch the last bunch of homemade firecrackers. After La Virgen entered the church, a long sisal string of connected firecrackers, wrapped into the rope at intervals was laid around the church, which if you have ever been there, you know is a very long and wide block. These firecrackers were then lit, setting off a chain reaction of noise and smoke that surrounded the church as we were leaving.

Later that night, after a quick dinner of panuchos at the wonderful restaurants behind the church, we walked around the fería, watching the neighbors play futbollito (foosball) and ride on the carnival rides. We were invited to hear two budding rap artists who live across the street, and who claimed they would be performing at 8 PM, but for some reason, their concert never materialized...

Everyone we talked to told us that though THIS was wonderful, the festivities that would happen the next night would be spectacular.

Alas, those festivities never came to pass, but were rained out by the heaviest rain in 25 years from a storm that dropped more water in five hours than fell during all of Hurricane Isidore. And all those statistics do not even begin to communicate the noise and fury of the thunderstorm that shook our stone and cement house like a rogue but harmless earthquake. The dogs and cats cowered, the water flowed and we bemoaned the fact that we would have to wait until next year to see the spectacular finale to San Sebastian's two weeks of summer fiesta.

Want more? Check out our Photo Gallery for photos of the estandartes! 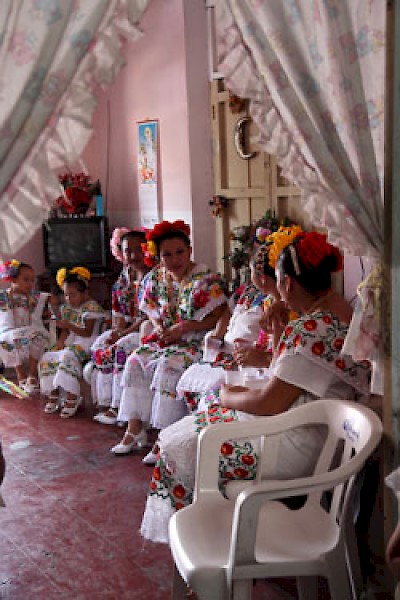 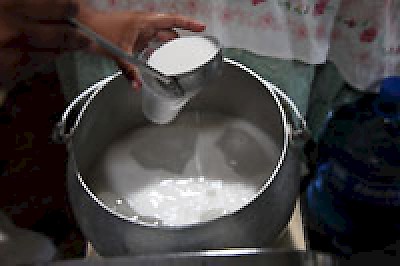 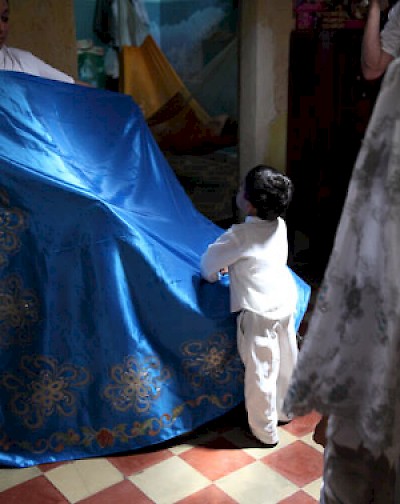 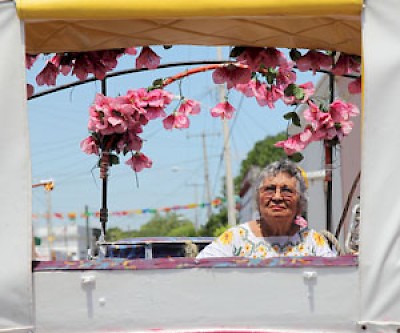 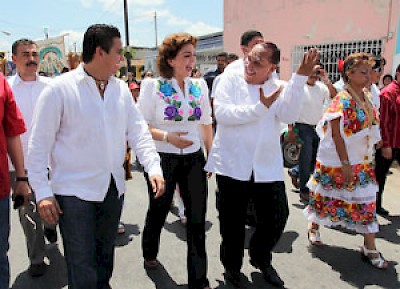 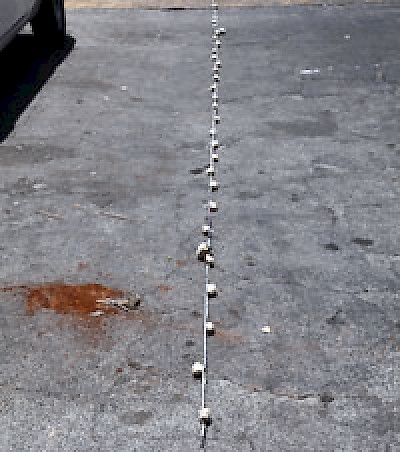 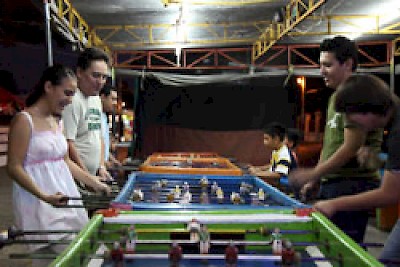