As our regular readers know, we're building a house in Merida, several blocks south of where we live now, in Colonia San Sebastian. Many people who come to live here buy an old colonial building and restore it. There are some really beautiful buildings here, with columns and pasta-tile floors, that have been abandoned or neglected. It's a real pleasure to bring them back to life.

For the last five years, we have lived in one of those restored colonials. Now that we have two rather big dogs, we decided we needed something bigger. At the same time we decided to try something a little different. We bought a rather small and simple colonial house that was on a large piece of land. We saved the first two rooms of the house, with their high beamed ceilings and thick stone walls of mamposteria. But all the newer construction behind it was demolished and we are building a totally new home behind the colonial facade. Our design aesthetic is based on the notions of a renovated monastery with a modern Yucatecan ambiance.

The designers have created a plan, of course. The section shown to the left is of the inner courtyard with the front rooms of the house at the bottom and a passageway on the right. We spent quite a few meetings pouring over both the general plan and the electrical plan. We've decided to put ceiling fans in every room and outside on the terraces under the tejebans (which almost translates as "eaves". A tejeban is the structure built over an outside living area). We have been careful to place our lights and outlets where we are going to need them. Even though we have planned everything in advance, the albañiles will still build the walls and then carve out channels afterwards to put in the electrical and plumbing. That's just the way they do it here.

And we've also had a couple computer renderings done of what the completed structure is going to look like. The view below is of the inner courtyard, looking toward the back of the house. The rendering comes complete with guests in bathrobes (for scale, we suppose) enjoying the terrace outside their guestroom upstairs. Underneath the guestroom is the kitchen, with large floor-to-ceiling glass-and-iron doors to let in light and air. At the end of the passageway on the right is the backyard and the pool.

For the last few weeks, we have been refining the design of our home with our designers/ contractors. We have been visiting showrooms and deciding on floors, columns, finshes and tile designs so that we can more accurately understand how things will look and what our costs are going to be.

While we've been doing that, albañiles have been digging holes and pouring foundations, digging pozos (wells), locating and digging a new fosa septica, and finishing the perimeter walls. In the process of finishing one of the walls, the albañiles had to build a new outdoor laundry-washing station for one of the neighbors in order to replace the one they had been using that was where a wall needed to go.

Most of the work being done so far is by a team of masons. We're finding that this part of the work is the hardest to budget for, because it is the hardest to estimate. For instance, we had one number for the cost of building the perimeter wall, based on square meters. But once it was decided that the walls were going to have to go higher because the pool is being built above ground, not only did the square meters increase, but the rebar-reinforced towers that are built at intervals along the walls were going to have to be built closer together to accommodate the increased height. This was going to take longer and cost more. And so the inevitable increase in expenditures begins!

The photo to the right is the same view as the computer rendering, but as things look today. Notice the big hole on the left behind the man in the blue shirt? That's for the fosa septica, which is located under the courtyard. For decades, houses in Merida have worked with an elaborate French-drain type of system. There is a new, cheaper method now of dealing with human waste that involves installing a type of plastic septic tank. But it also requires maintenance and cleaning every two years, whereas the time-tested option only needs to be serviced every 10 years or so. We had to decide which to use. We opted for the traditional system and greater cost up front with lower maintenance in the future.

Most of our floors are going to be concrete, another low cost and low maintenance option. We have a lot of floors, so we needed something we could afford. In the exterior spaces, the concrete will be treated to look like terracotta and left a little rough like sandstone, so we don't slip when it rains. In the interior spaces, the concrete will be a buttery color and polished. In some rooms, we will have borders or central tapetes (rugs) of pasta tiles, because a house in the Yucatan without those beautiful mosaicos is like an Italian meal without wine.

Another thing we've been dealing with in the last few weeks are the utilities. When we bought the house, both the water and electricity bills had been paid up to date by the previous owner. Now we're trying to put those bills into our name, and there are always complications and of course, in Mexico, this sort of thing can never be done with just one visit.

In the case of the water bill, we've discovered that through some typo by a data entry clerk years ago (the house was abandonado (abandoned) for years before we bought it), our address became associated with two water "contracts". The one that was paid up has its own problems. We need the water company, called JAPAY, to install a new medidor (meter) because the old one has so much condensation inside, it's unreadable and the meter-reader can't take lecturas (readings) from it. The other erroneous contract has a past-due balance of over $8,000 pesos. That's over a hundred years of water bills at the normal rate. Needless to say, we aren't planning to pay that bill, but it's taking multiple visits to set the record straight and get the bill into the name of its rightful owner. That rightful owner is not going to be too pleased when their water bill finally catches up to them!

This week, the interior walls of the house are going up. There is nothing more exciting in the process than seeing two-dimensional plans suddenly turn into three-dimensional reality. In the next week or two we should be able to see the basic structure of our house spring into existence. After that, you'll be able to watch us agonize through the next few months of adding in all the rest of what makes a concrete block structure into a liveable home. 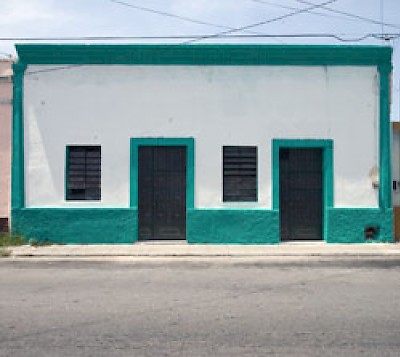 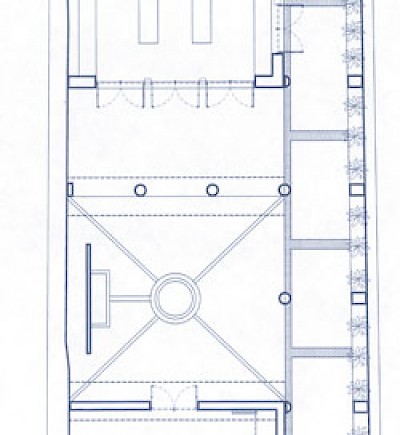 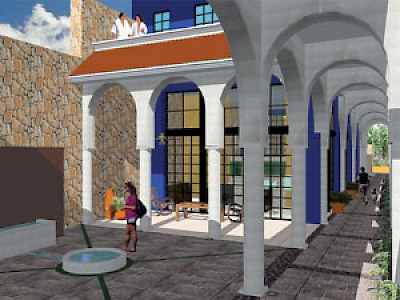 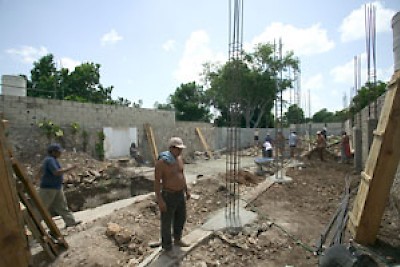 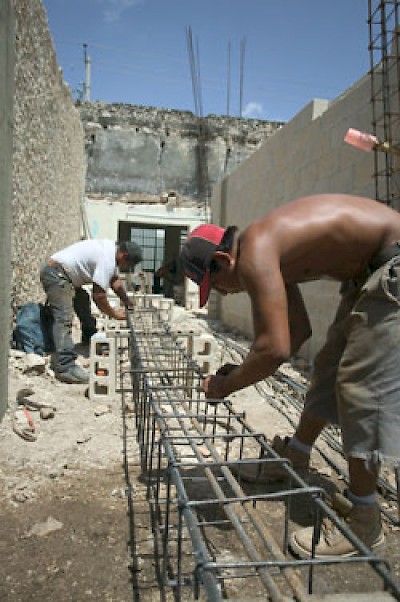