A few mornings ago we set out early to check on our new property. The designers/contractors had told us that the albañiles (workers) had begun demolition and we wanted to check it out for ourselves. As we drove from our office in the north of the Centro down Calle 66 to the southern part of the Centro, we noticed how quiet and lovely the city is on the weekends. It's a lot like any other city that way. People come in from the outskirts to work, so on the weekends, the city is a lot quieter and parking is easier.

We got to our new home, which is as yet unnamed, and no one was there. We had a key, but after much fussing, realized that the key we had worked on the left door (there are two doors into the building) but that door had been boarded up from the inside. The key did not work on the right door, which is now the only way to get in. We called the designers/contractors, went to their house (which is close by) and picked up the right key. Back at the house, the abaniles had arrived for the day and we didn't need the key. Que tipico!

The albañiles (there were five of them that day) had all arrived in a open truck from the nearby town of Uman. This is very typical. Most albañiles live outside of Merida in a small town and they are hired as a team. Someone has a truck and they all pile in the back, often sitting on bags of cal or cemento or whatever else is also being trucked to the job. Unlike in the States, there don't seem to be any enforced regulations about how people ride in vehicles, so they just pack in as many people they need at the destination.

We introduced ourselves to one or two of the albañiles and then went back into the property to peruse the progress that had been made on demolition of the existing buildings. The design of our new house calls for keeping the front two rooms of the existing structure, which are the oldest and are built with mamposteria (stone and mortar) walls and high ceilings. The additional rooms were added on later and are typical cinder block construction, so they are fairly easy to demolish.

By the way, if you are going to build in the Yucatan, you'll want to learn the word mamposteria (mom-post-ter-EE-uh) . It is the name given to the kind of stone and concrete wall that has been built here for centuries. Most old colonial buildings here have some if not all walls built that way. They are incredibly sturdy and insulate well against the heat, keeping the rooms cool during the day. But it is rather difficult to put tuberias (pipes for plumbing or electrical) into those walls. In most of the older buildings here you will see electrical lines running along the surface of the walls.

Anyway, while we were observing the destruction of the non-mamposteria walls on our property, one of the men introduced himself. He was going to be building the walls around the property and he told us his name was Jose Paredes. We all had a good laugh at that, since paredes means "walls". He told us that the man who owned the property on the other side of our house wanted to sell the land behind his house to us. We explained that we had been offered the land on the other side as well, but that it is difficult to add land like that to our fideicomiso. However, we told him, we might be interested. We also told him we would be more interested if he or someone could offer us land that allowed us access to the street. As we understand it from our lawyer, if the land has access to the street, it wouldn't have to be added to the existing fideicomiso, but could just be purchased separately, which can happen a lot faster.

Update: A week or so later, and the demolition was finished and there is escombro everywhere. What is escombro? It's the debris you find in an empty lot, or after tearing down a wall. Anything related to construction that has to be hauled away... that's escombro.

The demolition was probably finished sooner than this, but we just got our car back from the shop, so this is the first time we've visited since all the walls have been torn down. As we expected, the space is really opened up and we enjoyed walking around, trying to get a feel for the size and space of the rooms in our now-approved house design.

While we were there (walking our two dogs on leashes), the neighbor peeked over the wall and then her dalmation, named Mancha, came over to visit. The word mancha means "stain", "track" or "spot", like a dirty spot on your clothes that you need to clean. Mancha is a very macho dog and he has decided that our property is his. He doesn't bark or get nasty; he just pees on everything. (We don't actually use that word here. Here we say wixar, a popular Mayan expression that means the same thing.) After Mancha pees, he vigorously kicks up a lot of dust with his hind legs like a raging toro, probably to spread his scent as far around as possible.

We were talking to the neighbor, exchanging pleasantries and letting the dogs get to know each other, when before we could yell or stop him, Mancha dar a wixar on Working Gringo's LEG! Suddenly, WG felt like *he* had a spot he needed to clean very badly, so we left. We had been feeling a little sorry that in walling in our property, we'd be depriving Mancha of his dog run. But after that, we decided that it was just his karmic due. 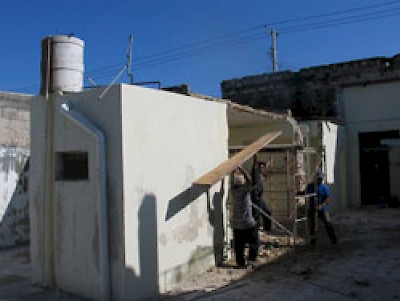 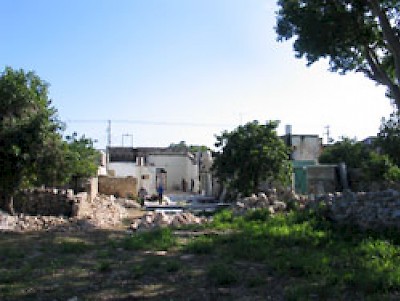 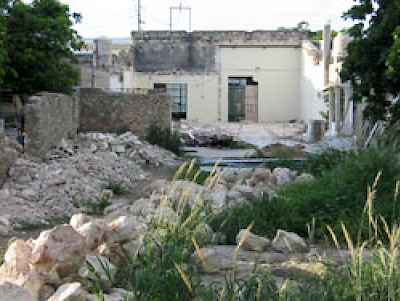 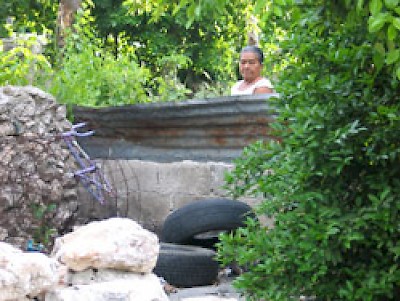 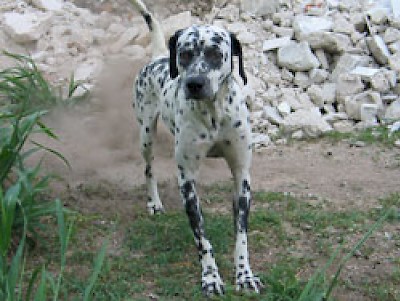