Saving Energy in the Yucatan

If you live here, you know about the CFE: La Comisión Federal de Electricidad. But no one calls it CFE here in Mexico. They call it by its first name only: Comisión, and everyone knows who they are talking about. Electricity is the most expensive utility in Mexico, at least among the expat crowd. Comisión has a great website, where they proudly proclaim, in both English and Spanish, that they are una empresa de clase mundial (A world class company). On the website, you can learn about their mission, find out the weather all over Mexico, read the history of the Comisión (did you know that as late as 1937, there were three different companies providing power in Mexico?), read their financial statements, and of course, pay your bill. Oh, oops! You can't pay your bill there... but they will refer you to a bank (Banamex, Banorte, Inbursa, Bancomer, HSBC or Santander) where you CAN pay your bill online. Of course, there is much MORE information on the Spanish side of the website, but really, the fact that there is an English website at all is rather impressive.

Usually, we have no occasion to read the website. We pay our bills, in cash usually, and we are grateful for reliable electricity. But the other day, due to personal circumstances, we learned something about electricity consumption here in Mexico, and we thought we'd pass it on. This is not something we would have ever known if we hadn't moved from one house to another and noticed a big change in our electric bill.

In our old office, we worked in a traditional colonial home that had been renovated. Due to a lack of windows, we ran two mini-split air conditioners all day, every day while we were working. We had a small refrigerator. We regularly paid bi-monthly bills of $8,000 pesos or more during the summer months. We figured this was just the cost of doing business.

Flash forward to our new home and office combined. We built this building with air flow in mind. We built higher ceilings, a second story, skylights that open, and a breezeway, so consequently, we have less need for air conditioning, even during the hottest summer days. In addition, this house and office are almost completely new: new walls, new wiring, new fixtures. Electricity flows unimpeded by faulty connections or old wiring. Our appliances are all new, so we have energy-efficient air conditioners and refrigerators (yes, we have two refrigerators). The house and office combined are at least three times larger than the former house and office, and yet the CFE bills have been less than a third of our former bills.

(Insert mental picture of us quizzically scratching our heads...)

We were extremely grateful for this... but also puzzled. We looked at the meter... yep, the right meter number is on our bill. The meter is turning. The reading on the bill is correct. We were a little afraid to ask, but we called CFE to understand why our new bills are so much lower. Here is what we learned:

If a house uses over 850 kilowatt hours (kWh) of electricity per month, averaged over a year, it will get bumped from the "1C" Tarifa (rate) to the "DAC" Tarifa (De Alto Consumo, which means "of high consumption"). Once this happens, your rate climbs in three ways. First, DAC customers are charged a minimum of $65 pesos per month. Secondly, the Basico (basic) charge for DAC consumers increases from about $0.5 to $2.5 pesos per kilowatt hour (summer prices). The third whammy (that's the technical term in English for golpe) is that the government does not give you an Aportación Gubernamental (Government Subsidy). That aportación can underwrite more than two thirds of your bill every month, which is certainly not trivial. Take a look at our last bill, below, for reference.

If you find yourself still categorized 1C, know that you have to stay under 850 kilowatt hours of average energy consumption per month every year. You'll enjoy lower energy prices and a government subsidy if you do. If you use more than that for twelve months running, then be prepared for much higher energy bills and no subsidy. If you find yourself already in the DAC category, what can you do? Cut your energy costs down to under 850 kilowatts per month for 12 months, and the CFE computers will (supposedly) lower your rates automatically. If they don't, here's what you can do: Take another look at the copy of the bill below. See the column titled, Consumo kWh por dia? Multiply that number by 365 and divide by 12. That's your average monthly consumption. If the number is less than 850, chances are you qualify, so take a stroll down to La Comisión and ask them to change your Tarifa back to 1C.

If these policies aren't motivation for cutting energy consumption, we don't know what is.

In investigating this issue, we have learned more about how CFE charges.

CFE rates each city in Mexico according to its average temperature. Merida is a "1C" city, whereas Chelem, por ejemplo (for example) is a 1B city, meaning it's average temperature is lower (in this case) and warrants less energy usage. The chart below shows the level of Kilowatts per month that the consumer must stay below in order to avoid being charged as a DAC (de alto consumo) customer.

Editor's Update: We recently followed a Google ad to this wonderful YouTube page sponsored by CFE. It's in Spanish, but even if you don't understand it all, you will certainly get that CFE and Mexico are beginning a campaign to teach Mexican children about saving energy. Viva Mexico!

Wikihow's How To Lower Electricity Bills in the Summer

Calculate your next CFE bill 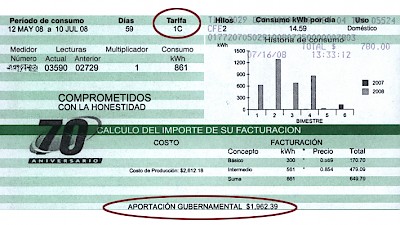