Predicting human behavior has been around since Thales simultaneously kicked off Western Philosophy, the scientific revolution, and earned the title as the world’s first true mathematician.  Just what does one of the lesser-known Seven Sages of Greece have to do with future real estate values in the Yucatan?   Thales loved to explain the world around him by replacing mythology and emotion with logical, scientific, and mathematical principles.  Fortunately for us, Aristotle recounted the following tale of Thales, a story which involves olive presses and olive production in Chios and Miletus,  giving us a glimpse of how logic and math can be used to peer into Yucatan's misty real estate future.

Thales and the Olive Presses

In part XI of Book One of  Politics, Aristotle spins a yarn about a philosopher  "who showed the world that philosophers can easily be rich if they like, but that their ambition is of another sort".  Aristotle tells how one winter, Thales put a deposit on all the olive-presses in Chios and Miletus, which gave him exclusive use of the presses after the coming harvest.

Since the press owners weren't sure whether the harvest would be bountiful or a bust, Thales, secured the contracts for very low prices in what is thought of as the first known example of options trading.   Aristotle also tells us that there was not one bid against him.   The olive press owners believed that they were protecting themselves against a poor harvest,  by guaranteeing at least some money up-front, regardless of how the harvest turned out. Good plan, eh?  Go with the herd. There's safety in the herd.

So how did it turn out?  An excellent harvest forced heavy demand for the presses. Since Thales held a monopoly, he rented them out at huge profits.    Was he an expert olive crop forecaster?   Not really. Rather, he deteremined that even a bad harvest would not lose him much from the lost deposits, while the potential profits of a good harvest far out-weighed the possibilities of small losses. Thus Thales showed the world that “philosophers can easily be rich if they like, but that their ambition is of another sort".

So what is Thales' lessons to us in the present moment?  Facts, logic, and math are not just the tools of scientists and philosophers.

For the past few years, many local expats have predicted only marginal real estate price gains here in the Yucatan, but a quick look at US demographics offers a different picture.   We are fast approaching 2013, when the 1947-1948 US Baby Boomers reach official retirement age.  2013 is notable, because the number of people eligible for retirement will jump by about 10 million, from 15 million up to 25 million.  This might seem like just boring facts.   But if Thales were around today, he might make a different case.  Here's where some simple bits of math come in.

Let's Do The Math

Since many of the eligible retirees will need to continue to work, maybe only 40% of the US Boomers will retire in 2013.  Let’s say then that there will only be 10 million new retirees every year.   Clearly, Mexico is not everyone's cup of tea, so maybe only 10% of those retirees will consider Mexico to stretch their retirement fixed incomes, yielding a paltry one million new retirees.    Continuing on a Thalesian path,  Merida is one of Mexico's top three cities for quality of living, and Merida and Yucatan's Gulf Coast offer safety, relatively low real estate prices, excellent health care, modern services, and even a growing expat population, so newcomers don't have to live like isolated pioneers.   If only 5% of those one million consider visiting or living in Merida and Yucatan's Gulf Coast, that would mean roughly 50,000 new expats coming to north Yucatan every year.  Are you starting to see the Thalesian opportunities?

The 25 million new Baby Boomers eligible for retirement every year will continue to drive a growing Grey Boom from 2013 to 2030.  For the sake of argument, let's say these Thalesian guess-timates are high by a factor of ten. That still adds 5,000 new expats every year, swelling Yucatan's current (approximately) 10,000 expat population dramatically. In fact, that would add 50% more expats in 2013 alone.  The more likely addition of 10,000 - 20,000 new expat visitor/buyers every year for the next seven to ten or more years would definitely change the Yucatan's economy and real estate opportunities. In fact, real estate in Yucatan might be similar to Arizona's & Colorado's 10X growth throughout the '70's, '80's, & '90's.

Where Will They Go?

Like Colorado's desirable mountain property, there is only so much beach property and only so much Merida Centro property. Like recent buyers, many of these new expats will fall in love with the romance of classic Spanish colonial architecture, driving the Centro market prices upward. Others will seek their beach front Shangri-La's on the Yucatan Gulf Coast.

A ten year torrent of five thousand new expats a year seems to belie some current predictions of marginal inflation of Merida and the Yucatan Gulf Coast’s real estate markets.  Keeping it all in good Thalesian factual perspective, the local real estate market is coming off a few flat years for both sales and prices, which makes some people cautious, like their 600 BC olive-press-owner counterparts. These are the ones who are predicting real estate growth that only marginally keeps ahead of inflation.

Which are you?   If Thales were here today, would he argue that 25 million newly eligible retirees every year between 2013-2030 is tough to ignore, and quietly place his bets? Would he do this even though many of the potential retirees have less in their retirement accounts now due to the recent worldwide economic failure?    Again,  facts, logic, and math may ride to our rescue.   Is it possible that the much heralded retirement portfolio losses are also ultimately a bit of a mirage?

A quick check of the major stock indexes shows recovery to their August 2008 pre-crash levels.  If the current trends continue, the data show that investors will likely erase all their losses in just the next year, reaching pre-crash highs by early 2012.    What does this mean for the north Yucatecan economy?  If Boomers didn't panic-sell their investments, they should logically recover all of their portfolio losses before 2012.

A different logical scenario is that many people approaching retirement in 2012-2013 followed financial advisor's advice and shifted their portfolios heavily to bonds five years before retirement. This would mean that many conservative near-retirement investors had moved their money out of stocks into safer-but-lower-returning investments like bonds in 2007, avoiding the big losses.   This group would still be financially on-track to retire on-time in 2013, allowing some of them to come to Yucatan.   Might this be another data point that improves the 2013 outlook?

So, Nothing To Worry About, Right?

Sunshine, sunshine, and more sunshine, with only smooth sailing ahead?  Not likely.

The current economic icebergs dead ahead include a few troubling points.   The majority of the US State Governments (30) are reporting significant 2011 deficits that could translate into up to 2 million new lay-offs, unless US taxpayers accept higher taxes.  Following Thales' example, if we guess-timate that 50% of the potential government layoffs occur, that would add one million new workers to the current ranks of the 14 million official US unemployed (a jump of 0.64%).   RealtyTrac researchers reported that 2010's high unemployment drove foreclosures up by 72 percent in 206 leading metropolitan areas last year, including many which were not hit as hard by the initial foreclosure waves that pounded cities in Nevada, California and Florida. They predict that foreclosures will increase by another 20%, reaching a peak in 2011.*

These figures are troubling, in that they project yet more distressed properties being dumped onto already overloaded US real estate markets, creating yet another one year backlog of unsold homes listed at depressed prices, all needing to be worked off in 2011 and 2012. The math and data point to a US real estate market that hits bottom in 2011-2012, but then starts to improve by 2013.   Yet again,  that pesky 2013 date pops up.

If US real estate markets finally improve by 2013, and hidden state government debts stop driving new layoffs, then gradually increasing home prices will encourage US Baby Boomers, who will then be considering retirement abroad.  The potential combination of some life in USA's 2013 future, as unemployment turns and real estate prices turn, coupled with a surge in greying Baby Boomer retirees, buoyed by fully recovered investment portfolios, bodes well for Yucatan real estate. It points to significant growth of the Yucatecan expat community between 2013 and 2030.  A rapidly growing expat community would also seem to illuminate real estate opportunities now that would make Thales smile.

Another article about foreclosures from Money News 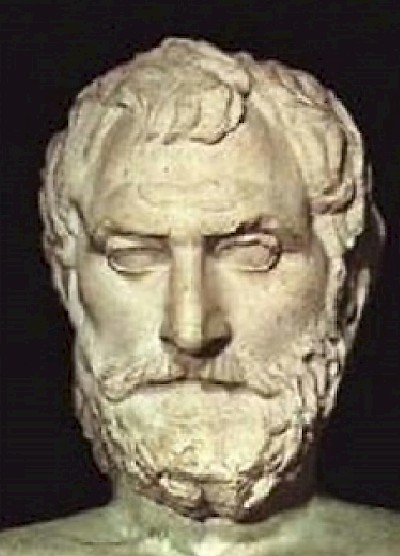 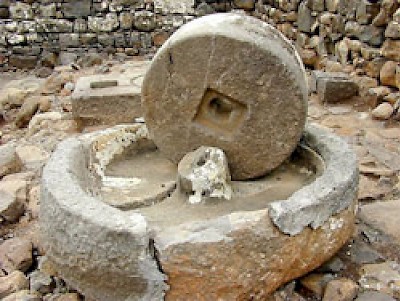 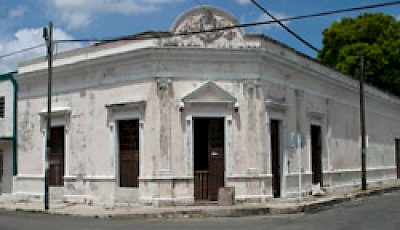 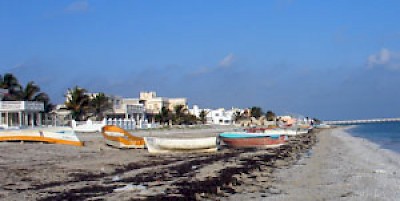 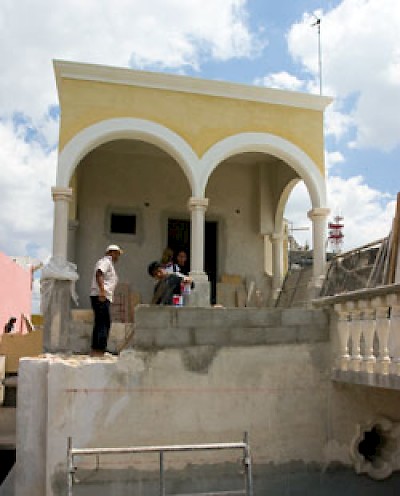 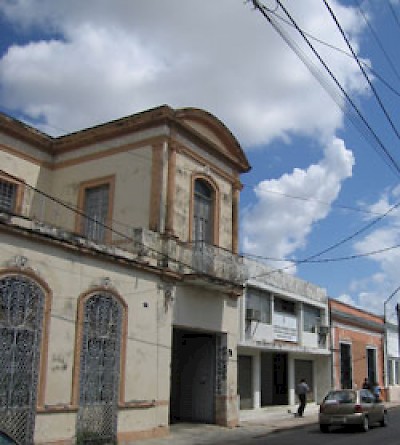