Earlier this week, when Working Gringa was visiting a friend around the corner from our office, we were dismayed by the sound of heavy construction two houses away. Finally the rain came down in torrents and the sounds of buzz saw and jack hammer stopped for the evening. We thought nothing more of it.

Then, at about four o'clock yesterday afternoon, there was a loud rap on our office door. We answered the door to find our neighbor looking very perturbed and excited. It turns out that the sounds heard earlier in the week were the beginnings of construction of a telephone tower on top of a building at the corner of Calle 49 and Calle 68. The tower is supposedly being built by a cell phone company and is to be over six stories tall. According to our neighbor, there is a similar tower at Calle 39 and Calle 64.

Our neighbor's complaint is that this is an historic district, supposedly being watched over and carefully maintained by INAH, the branch of the Mexican government that is responsible for maintaining the Mexcian patrimony, or historical heritage. INAH stands for Instituto Nacional de Antropología e Historia (National Institute of Anthropology and History) and is a familiar government entity to anyone who has ever tried to build or renovate a house in the Centro Historico of Merida. Many of us have had to submit designs to INAH and wait for INAH's approval before building and especially before making ANY changes to the facade of our colonial homes. So how is it that a cell phone company can simply rent a roof in the Centro Historico and install a six-story concrete and steel tower?

Our neighbor maintains that they cannot. A few days ago, she called the office of Desarollo Urbano (Urban Development) and found out that the cell phone company had never bothered to get an INAH permit for this tower. She then called INAH and was actually able to talk to someone who shared her concern and was unaware of the building project. Our neighbor then called Por Esto, the local liberal newspaper and brought Laura Sanchez, one of their reporters, into the mix. Laura brought a photographer and published an article about what was going on in today's newspaper.

Well, apparently, this put the cell phone company on the alert. They rushed a truck over to the construction site with tower struts loaded in the back and proceeded to work as fast as they could to erect as much of the tower as possible before INAH shut them down. They were fast, but not fast enough! Our neighbor, who can be like her chihuahua in ferocity and doggedness when she gets it in her mind that something is wrong, saw what they were up to. She immediately called her friend at INAH again. She called Por Esto again. And she came to our door and begged us to bring our camera.

By the time we arrived on the scene, INAH and other government officials had already been there to tell the workers to stop working. Our photos show them packing up their cement mixer and loading it onto the truck while our neighbor tells us the rest of the story.

Apparently Mexico is where they invented the phrase, "it's better to ask forgiveness than permission". The cell phone company's plan was to erect the tower before the government had a chance to see what they were doing. Then they would fight it in court, pay the multa (a fine based on a number times minimum wage. So a 16x multa is 16 times the minimum wage) and continue building. Apparently, if you build fast enough so that the project is more or less completed, you can get away with it, except for this rather small fine.

Our neighbor thinks something like a cell phone tower doesn't fit into the character of the Centro Historico (we must admit we agree) and that this will depress the real estate prices in this neighborhood. She was up all night researching who owns the cell phone company and why they might be doing this (since cell phone service here is already excellent). She also researched health hazards associated with living so close to this type of transmission tower. She walked through the neighborhood, noting down the addresses of all the colonial buildings in the surrounding blocks. She is preparing a petition. She is a woman on a mission, no question about it! And while we would hate to be the focus of one of her missions, in this particular case, we are inclined to cheer her on.

A few hours later, our neighbor knocked on our door again and asked us to take a photo of the Obra Suspendida stickers. When INAH or any other governmental entity finds a building that is in violation of some law or another, the building receives stickers from both INAH and the Desarollo Urbano, both declaring this Obra Suspendida (work suspended). If this action shuts down a business, they will also post large signs that say Clausurado. These stickers are not only embarassing for the owner and contractor, but we believe it is illegal to work in a building that is sporting them. Usually one or two stickers are sufficient, but as you can see from the photo, this particular project was somewhat tarred and feathered with them. We think perhaps someone in government is exceedingly upset about this situation.

We have since been told that the building behind the new stickers is owned by a local tailor who makes guayaberas, and that he made a deal with the cell phone company, which would rent the roof for about $1,000 US monthly for the next fifteen years! That's a lot of money for the property owner (not the cellphone company) to give up without a fight. So at the moment, the score is INAH: 1, Phone Company: 0. But we don't underestimate the power of money and connections to persuade local governmental officials. On the other hand, we're not inclined to underestimate the power of Our-Neighbor-On-A-Mission either.

This incident reminds us of the nightclub that was erected (pun intended) on Paseo de Montejo soon after we moved here. Its facade was designed to look like a massive beanstock, intended to beckon passersby like the entrance to a Disneyland ride. But somebody in the marketing department sure messed up because when they unveiled the sign announcing the nightclub's name, it was "Jack Off!".

For about two weeks, the nightclub opened every evening, attracting few patrons, until some gringo finally had pity and called someone in government to enlighten them about the meaning of this English expression. The next day, there was a huge clausurado banner the size of a house across the front of the nightclub, covering the name. About two weeks later, Hurricane Isidore threw a tree into the nightclub, destroying the facade and the sign.

So now we know who the ultimate authority is around here... 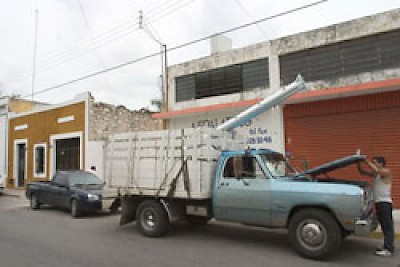 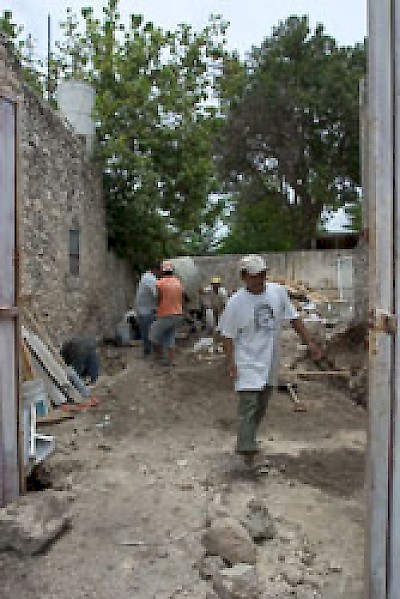 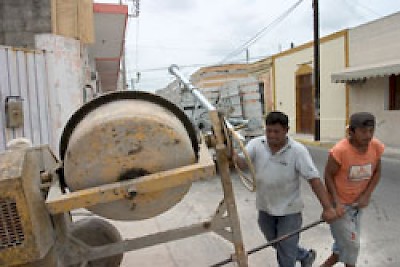 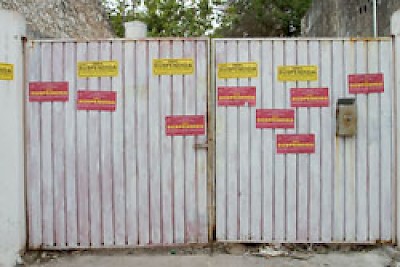