We can't believe it's already the month of May. We stopped construction on our house in early November of last year to find a new architect, but instead we found two, a married couple, whose names are Mercedes and Alvaro. Since mid-December, we've been working with them to create a new design, produce a detailed presupuesto, acquire all city and INAH permits and restart construction.

We signed a contract with our architects, using the general wording of a contract provided by our lawyer, putting in a few of our own requirements. In particular, we agreed that we would be the patron of record for the workers' Social Security, avoiding double taxation, but the architects would administer the program. We have since signed MANY government documents indicating that they are in fact making the payments. We also built into the contract an incentive for the architects to finish the work on time, with a small incentive if they bring the project in before schedule, and an equally small multa (fine) if they don't. The amount isn't enough to cause anyone serious pain, just enough to coax things along.

Construction began again near the end of February. So far everything has been moving like clockwork... and the clock is even running a little fast. We've had a couple of bad surprises, like when one of the few existing walls fell down as they were chipping away at the old plaster, which meant the wall had to be rebuilt. There were also the calculations revealing that the fosa septica had to be dug 80 cm deeper in order to accommodate the slope of the pipes coming from the various bathrooms. But these extra expenses have been balanced out by other tasks that have taken less effort than expected. The best news is that as of our last expense report, we seem to have accomplished more than planned with less money, a welcome trend.

Almost every morning, before 8 AM, we drive by and walk around the construction site to see what has been accomplished the day before. The crew arrives about the same time (and often earlier) from a town outside Merida, called Seye. First they change into their construction clothes, which many of them leave at the job site overnight. Then they eat a hasty breakfast, often gathering around a makeshift table to share Yucatecan fast food, like panuchos, washed down by cold Coca Cola of course. Then they go to work. There are actually three foremen on the job every day, supervising three crews, for a total of about 25 workers. We have discovered them still working at the site as late as 6 or 7 PM when we can't resist another drop-by to see the day's progress.

Most of the work at this point is done with cinder block and concrete. Foundations are poured over steel mesh woven from rebar. A thick, black, rubbery substance is painted over any part of the foundation that contacts the walls, to prevent leaching and subsequent moisture damage. In some cases, the walls are made of two rows of cinder block. Our thick walls are an aesthetic choice more than a requirement for holding up a second story. The mamposteria walls of the old colonial buildings in Yucatan are often more than a foot thick and there are places in our house where we want the same appearance. However, most of the structural strength is provided by strategically-placed beams of concrete and steel built inside the walls.

Our house design calls for about a dozen columns and arches, which are also a typical feature of Yucatan colonial homes. The columns we chose are pre-fabricated concrete and arrive in sections. Since they are load-bearing, the centers of each column are fitted with steel trusses and filled with concrete. Stone columns are available here too, but we went with concrete that looks like stone because they cost less.

The arches are formed on top of the columns, a process that seems more like sculpting than construction. The negative space below the arch is roughed out using a checkerboard pattern of cinder blocks. This is covered with mortar to form the line of the arch. The workers need nothing more than a piece of string to keep the angle true. A layer of brown paper is smoothed over the mortar and everything is allowed to dry. Then wood planks are nailed to each side of the form to create a mold above it and the concrete is poured inside. After a few days, the cinder blocks and wooden planks are knocked away to reveal the arch.

Plaster is applied to the cinder block walls by hand in three coats, using a process we have only seen in Yucatan. The first coat is called rich (pronounced "reech"). A thin soupy mixture of Portland cement and sand is literally slapped against the wall with a trowel. This seals the cinder block and sets up a very rough surface for the next layer, called the reboco (ray-BO-ko), or emparche (em-PAR-chay) by some. This is the so-called "rough coat", which is a much thicker layer that smooths out any imperfections between adjacent blocks to produce a level surface. The reboco is allowed to dry and crack for several days before receiving the final or fina coat, called estucco (ess-TOO-ko). If you want a textured stucco finish, then ask for huleado (oo-lay-AH-do), but if you prefer the almost polished look of hand-troweled plaster typical of colonial architecture, ask for bruñido (broo-NEE-do).

Stage One of construction has been to build the basic structure of the first story, naturally. And much to our delight, the first story is now being covered with a roof, which might be completed by the end of this week. All the downstairs walls are completed and being plastered as we write.

What's more, the plumbing and electrical is already being installed in the downstairs rooms. This is unusual in our experience here. In most renovations and even in many new constructions, the walls and floors are finished before the plumber is called in. This means a chisel and hammer are applied to the finished surfaces to cut out channels in the concrete where the pipes and conduits are installed, after which repairs are performed to hide the work. This tradition comes from a time when the colonial homes had been built long before the advent of plumbing or electricity. Our architects are not observing this tradition, however, and being ever cost-conscious, plan to install at least one functioning toilet right away so we can eliminate the expense of the sanitario portátil, or what we call a "honey hut" back in California.

Last week, we decided that it was time to start thinking about ordering the mosaicos (tiles) for the floors, as custom tiles can take up to three months to deliver. We have been looking for some used mosaicos as well, but so far haven't found any with designs we like. There are so many patterns and color schemes to choose from!

We also intend to use mostly reclaimed wood in the house. This mostly applies to doors, so we have been shopping at the local antique dealers and other locations to find classic hardwood doors removed from abandoned colonial houses. There are still many to choose from, and the cost of refinishing them is less than the cost of making new ones.

Another important element of Yucatan colonial architecture is stone. We plan to pave our inner courtyard with rough-hewn stone and install other carved stone details around the house. There are several types of limestone quarried in Yucatan, but most of the preparation and carving is done in a small village north of Merida, called Dzitya. We recently visited there with our architects and their children. You can read about it here.

Today is May 3rd, and as everyone around here but us seemed to know, it's the feast day of Santa Cruz, or the Holy Cross. Santa Cruz is the patron saint of all albañiles (masons) and builders. On this day, the workers will set up an altar on the job site. At noon, all work will stop. They will then be treated to a lunch of cochinita pibil and ice-cold Coca Cola by our architects and ourselves to honor them on their day. We don't doubt that some voladores (rockets) will be set off during the events. And since the afternoons here are starting to live up to Yucatan's reputation as a hot house, we plan to hire a paleta cart so everybody can enjoy cooling off with their favorite ice cream.

To all those who toil under the hot sun to build and renovate and repair our homes, muchissimas gracias!

If you'd like to read previous articles about building our house in Yucatan: 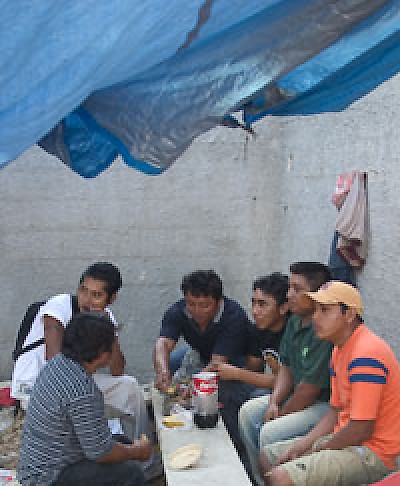 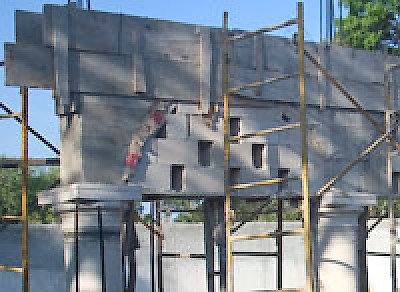 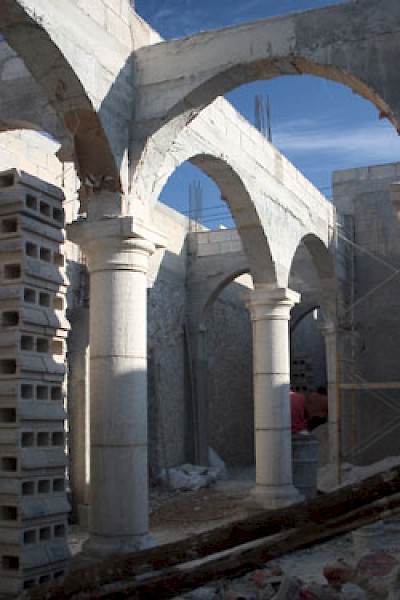 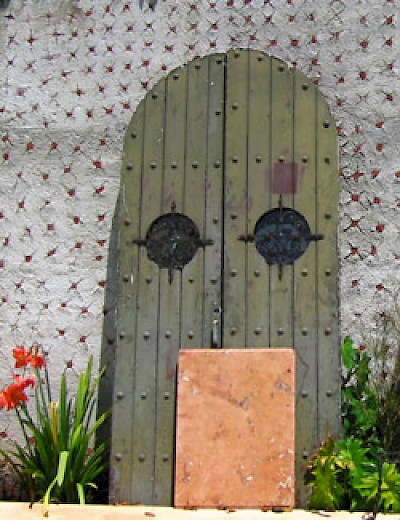