Adding to an Existing Fideicomiso

The property we purchased in Merida for our new house is in the shape of a flag. The property is 10 meters wide at the street, and 65 meters deep. About 40 meters back, it widens out from 10 meters to 25 meters, creating the "top" of the flag. One of the reasons we liked the property so much is that once you get into the "back 40", so to speak, all the properties are undeveloped and there are big trees and lots of open land in the middle of the block. It's very peaceful and almost pastoral, especially for being in the middle of a city of nearly one million.

About eight months ago, after we bought the this land through a fideicomiso (a special land trust in Mexico that is administered by a bank), we got the idea of turning the flag shaped property into a "T" by buying the back portion of our neighbors land. It's undeveloped and it seemed like having that extra land would make it even more wonderful back there.

Through the buyer's agent that found us the property in the first place, we talked to the neighbor and he agreed in principal to sell us a piece of his property. We had a meeting where we stood out in back, under his tree, and agreed, again in principal, where we would draw the line. His property is also 10 meters wide, so we would be getting a section about 10 meters by 22 meters (a piece almost as large as the entire lot we live on now) for $80,000 pesos which is less than $8,000 US. Such a deal!

The first step was to talk to our lawyer. What do we need to do to accomplish this sale? Buyer and seller are agreed... let's just draw up the paperwork! Well, not so fast, hombre. First you need to get the "plat" (pronounced like the English word "plot") for the property next door. The plat is the official plan of the land, showing where any structures are and where the streets are, etc. that is filed with the Catastro del Municipio de Merida. This is usually attached to the Cedula Catastral which is the official document that shows the square meters of the land and the structures on the land, as well as the appraised value of both.

Value is a funny thing, isn't it? We just noticed that the Catastro appraises our land's value as worth two thirds the value of the structures that are built on it. We, on the other hand, think that the land is very valuable and are planning to demolish most of the existing structures. Of course, we know a couple who sold a house in Aspen for a few million dollars, and the new buyers are taking down *that* structure too because they really only wanted the land. It just gives weight to that old real estate adage: "Location, location and location" (that's the answer to the question, "What are the three most important things in real estate?")

Anyway, the buyer's agent got the plat from the sellers and gave it to the lawyer. The lawyer called us to say that the plat that he delivered was for somewhere in Progreso, so she was going to have to go downtown to the Catastro and get the right plat. Okay. More time elapsed. The lawyer now had the right plat, but we had to take the exact measurements and draw them on a copy. More time elapsed as we looked for someone to do that, explained that there was no disagreement between buyer and seller and please (!) just go take the measurements.

Finally, as measurements were about to be taken, we talked again with the lawyer. She explained to us that the next step was to take the plat with the line on it to the Catastro. They would then send someone out to take their own *official* measurements. Then we would have to take that new plat to the bank that administered the fideicomiso and have them add it to the existing fideicomiso, something they are (apparently) loathe to do. They are likely to ask us to form a separate fideicomisio and then merge them (and why not? more money to everyone... except us, of course). How long did she think it would take? About two months. And of course, if the lawyer says two months, it will probably take longer. And in Merida, you don't want to need a lawyer during July and August if you can help it. Because even if they aren't at the beach during that time, their whole family is and their mind is elsewhere.

So, to make this long story short, and to simplify our lives, we decided that we really didn't need that additional land. And decided not to buy it. This will allow us to get started building a wall and completing a finished design right away. We want to get building soon to avoid the worst of the rainy season and to be ready to move in December. 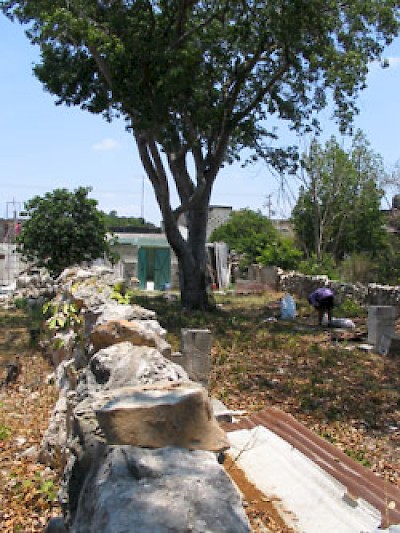