In case you haven't been following closely, the Working Gringos come from California. There is a lot of outdoors in California and so we were pretty accustomed to walking and hiking for entertainment and relaxation.

Six years ago, we found ourselves putting down roots in Merida, the oldest continually-inhabited city on the continent, a city chockful of colonial buildings, Maya artifacts, turn-of-the-century mansions, tropical gardens, museums, restaurants, art galleries, theatres, nightclubs, shopping malls, and more... a million things to do but very few nice places to take a walk in nature. Sure, you can walk down Calle 62 to get to the zocalo... we walk all over the Centro. But this activity is more of a survival sport than a means of relaxation or exercise. When you aren't dodging low-hanging airconditioners, open holes and stray pieces of metal sticking out of a sidewalk whose width and height changes on a whim, you're barely avoiding getting hit by one of the various brands of city buses. Not to mention the huge tour buses that occasionally stalk the downtown streets like huge, bloated caterpillars from another planet. No, walking in the Centro is not a peaceful pasttime.

We know we are not alone in our desire to walk. Walking and hiking are not a traditional activity among the citydwellers of Merida, but the Maya have always referred to themselves as caminantes (walkers). For the Maya, walking was (and still is for many) a way of life. We must be partly Maya, because walking is essential to our mental and physical health. Walking is good for the soul. To paraphrase, we walk, therefore we are.

So we have spent the last six years steadily seeking out places to indulge in our favorite form of moving meditation. We're going to share our discoveries, and hope that by doing so, more people will be able to enjoy more of Merida. If you know of another place, please tell us about it in a comment. The poll will be open until December 31, 2007, and we will announce the winner in January. In the case of this poll, there really are no losers. We're all winners this time!

The nominees for Best Place to Walk in Merida in alphabetical order are...

AcuaParque - A very well kept secret is the AcuaParque... at least, no one we know seems to know too much about it. We're about to end all that. The AcuaParque is in an area of town called Vergel. We hear it was once a stone or gravel quarry. Over the last few years, it has been studiously reclaimed for both animals and humans, and now provides one of Merida's most beautiful walking venues. You can't walk there from downtown, but the destination is worth the drive. The park is centered around a man-made lake. There are tennis courts, palapas with picnic tables, piers and cement structures for children to play on (including a very long slide down to a sandy playground). For the bird population, there are extensive wetlands towards the south end of the park, and we've never walked there without seeing multiple types of egrets and ducks. As we write this, AcuaParque is still flooded from this most recent rainy season, and the lower part of the park is prohibido (prohibited). Not to worry! The upper part of the park also has paths for walking and has some beautiful views of the lake and the wetlands down below.

Estadio Salvador Alvarado - The Salvador Alvarado Sports Fields and Stadium takes up a very large city block on Calle 60 north of the Fiesta Americana hotel. In the center of the huge walled-in area are tennis, basketball and handball courts, a huge structure with bleachers for watching Track & Fields events, an Olympic-sized swimming pool for training, baseball and soccer fields and open grassy areas. We've seen people taking salsa lessons in there, practicing marching for parades and any number of other physical and sports-related activities. Just inside the wall is a well-groomed circular dirt track for running and walking, which is well-attended in the early morning and evening hours. We've been to Salvador Alvarado as early as 5 AM and the gates have been open. The track is shaded by bougainvillea and various flowering trees, and provides a cool (if somewhat circular) venue for serious forward motion.

Paseo de Montejo - The most obvious place to go in Merida if you want to go for a leisurely walk. If you go early in the morning or on a Sunday, your stroll can focus more on the old trees and mansions instead of the city traffic. Early in the morning, the sunrise shines a golden light on some of the city's most fabulous turn-of-the-century (that's the 18th century...) architecture. At dusk, you can see all that and be serenaded by hundreds of kau (pronounced "cow") birds (grackles), screeching their way back home. For holidays, the Paseo is lit up like the Christmas tree that stands at one end in December. And every evening, there are ice cream shops and a few sidewalk cafes that threaten to interrupt your stroll. On Sunday mornings, there's an Art Fair along one side (in front of the VIPS restaurant) and for ten months out of the year, the MACAY's outdoor sculpture exhibit is on view as well. In short, there's always something to capture your interest and imagination along Paseo Montejo, and almost nothing to get in the way of a lovely walk.

Parque Ecológico- What a treasure this park is, and a hidden treasure at that! For years, we would see the signs to Parque Ecológico and not have the time or inclination to follow them (in truth, they are rather unassuming signs which do not do a good job of advertising their subject). Finally, some friends gave us explicit directions and we found ourselves there early one morning. Like the AcuaParque, Ecológico is a reclaimed quarry, and has both upper and lower levels. Both levels are heavily planted with trees of all kinds, and there are great expanses of grass for soccer games or just plain running around. The paths are nicely lined with rocks and are well-used by both people getting exercise and kids walking their parents to school (no, that's not a typo, it's a joke...). On the lower level of the park, in the center, are more paths, but also a few ponds with water lilies, wooden bridges and resident birds. Like the AcuaParque, at this writing Parque Ecológico is still recovering from the rains, and some of the paths are flooded. But there is still plenty of room to walk and even some small hills to climb. We particularly enjoy the feeling of walking up a hill, something we used to take for granted in California but a feeling that is hard to come by in the Yucatan. (We always try to walk up the moving sidewalk at WalMart or Mega grocery stores, but it isn't quite the same, is it?). In addition to hills and vales and ponds, Parque Ecológico has areas that seem so remote, we probably wouldn't go there alone after dark.

Avenida Itzaes, Parque Centennario and Parque de la Paz - On the west side of Centro, there is a lovely area along Avenida Itzaes, that includes the Centennario Zoo and the park across the street, called Parque de La Paz. This area was created during the Profiriato, that time in Mexico when the President, Porfirio Diaz, was bringing Mexico into the 20th Century and bringing many European cultural ideas to this country. This area has "culture" written all over it, and turns out to be a lovely place to spend a little time. If you can get yourself to the corner of Calle 59 and Avenida Itzaes, a lovely walk can be made by starting at the north end of the Parque Centennario, which was once Merida's largest park, but is now the Zoo, entrance is free and it is open every day (except Monday). Stroll through the park, below some incredibly old and large trees, and exit through the other main zoo entrance on Avenida Itzaes. Cross the avenue and walk along the Bellas Artes complex of buildings and gardens. If the gate is open, go inside and stroll the grounds, taking in the children attending their dance classes and the topiary trees trimmed to look like the House of the Seven Dolls at Dzibilchaltun. Continue up Itzaes back to Parque de la Paz. Parque de La Paz (Peace Park) has a large fountain in the center, which is lit up at night. The park is flanked on one side by the former Juárez Penitentiary, a formidable building which has a way of looking quite beautiful at sunset. The park is full of trees and very well groomed, and is a pleasure to stroll around and through. Sitting down on one of the benches and watching the world go by is pretty nice too. On Sundays, you can even stroll around the park and shop for a used car, as this area becomes Merida's unofficial used car lot every Sunday morning. And if you are still feeling restless, cross the street to the north and go inside the grounds of the O'Horan Hospital. There are lovely lawns and trees behind the hospital and the area is open to the public.

These are the best places we have discovered within the Periferico limits of the city of Merida for taking a leisurely and enjoyable walk. You might even be able to walk hard and fast and far enough in some of them to call it exercise! If you are careful and respectful and go at the right time of day, you might even be able to bring along your favorite four-legged companion.

If you know of other good places to walk, we'd love to hear about them. Please send us a comment and we'll add your suggestions to the list. 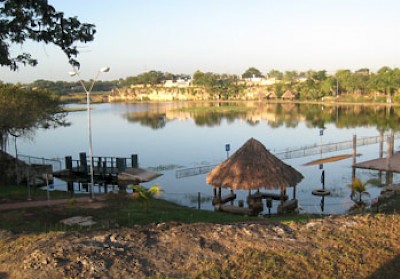 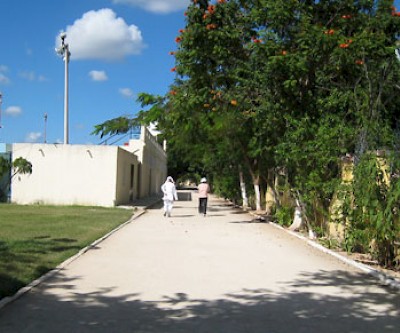 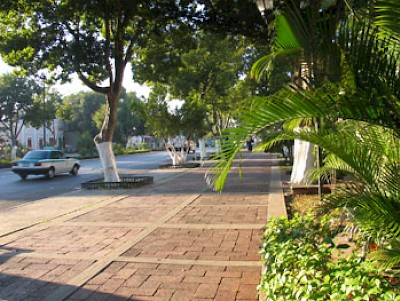 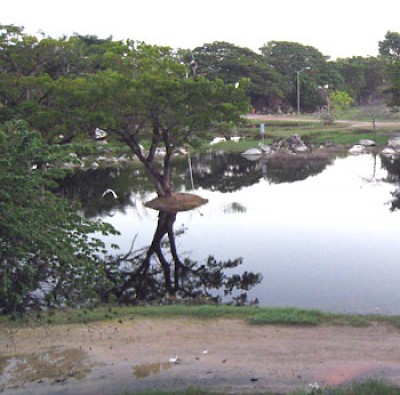 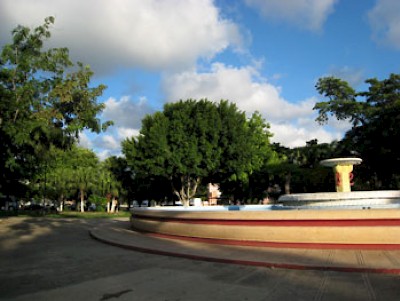