A group of twenty two municipalities in the eastern section of the state of Yucatan are banding together to create a brand and market tourism in their part of the world under that brand. The group will host a national and international tourism fair in Valladolid to showcase the brand and the attractions in their area. On September 20 and 22, the brand called simply 'Maya' will showcase the rich culture, crafts, food, natural, traditional festivals of these municipalities. The fair will be attended by 60 travel agencies in 28 delegations of the Mexican Association of Travel Agencies (AMAV). The fair will begin on September 20 at 8:00 PM in the Convent of San Bernardino Siena with a dawn tour of the Calzada de los Frailes. The day ends with a vaquería, the traditional dance of the Yucatan, with music from the orchestra of Victor Soberanis, all free in the centro historico of Valladolid. On Saturday starting at 10 AM, there will be an exhibition, craft show and food demonstrations. A city tour that starts at 4 PM will end with an evening of music in the Candelaria neighborhood. Sunday's activities include a presentation of a play called 'Mayan Sacred Moments' starting at 5 in the afternoon. The conference will close with a presentation of the Yucatan Symphony Orchestra at 8:30 PM in front of City Hall. The group certainly plans to make this an annual event.

Salvador Alvarado Stadium to be Remodeled

The state government of Yucatan has announced that it will spend more than 2 million pesos to remodel the Salvador Alvarado Sports Stadium located on Calle 60 just north of the hotel zone. Areas to be rehabilitated and renewed include the swimming pool and its filtration system, various surfaces throughout the stadium, as well as the tennis and volleyball courts. The Governor Rolando Bello made an appearance at the stadium, walking around with press, playing a little tennis, shooting some hoops and participating in a Taebo aerobic class.

The state government of Yucatan has announced that it will be spending even more money renovating Kukulcan Stadium, also in Merida. Governor Zapato Bello announced that the state of Yucatan will spend 300 million pesos on the construction of a velodrome, a new multi-gym and aquatic center and basic renovations at Kukulcan. The stadium, which has 271 thousand users per year, will also see a comprehensive renovation of the Zamná Polifórum, an 1200 meter athletic track area and improvements to the green areas. Kukulcan Sports Arena was inaugurated in 1982 and has an area of 227,242 square meters. It has been the scene of various sporting events, the Olympic National Boxing Championships, various league games and tournaments and Mexican Baseball Professional football. Current facilities include a swimming pool with an Olympic diving pit, four racquetball courts, six tennis courts, 10 basketball courts, the same number of volleyball courts, two football fields, a golf park, as well as a baseball and softball park, an aerobic track and a multipurpose room... not to mention the Leones' baseball park, the football stadium, and the Polifórum Zamná, a large venue for concerts and other large events.

Following in the footsteps of the municipality of Merida, Progreso is now installing WIFI in public parks. There are now 12 parks in Progreso with free, city-sponsored WIFI provided by Cablemas. Chicxulub parks will be getting the same WIFI capabilities soon as well. This will give the many students in Progreso access to the internet for homework, for communicating with friends and family and for learning about the world around them. Bravo, Progreso!

The Lion's Club just announced that they have donated packages of school supplies to students of the Felipe Carrillo Puerto elementary school in a section of Progreso called Paraiso. A speaker from the Lion's Club told the students to perform their best this new school year and encouraged the parents who were present to support their children and their scholastic endeavors unconditionally. This section of Progreso is said to be one of the most needy in the entire town of Progreso.

Have you begun to notice bilingual tourism signs around Progreso? The town of Progreso recently began installing bilingual directional signs in town, to guide foreign visitors who arrive on cruise ships and the seasonal Canadian residents of the city during the winter holidays. The Director of Tax Collection, Markets and Tourism, Cecilia Meza Rodriguez reported that the placement of these signs was the result of surveys conducted by the Association of Friends of Progress. The signs were built by the Department of Tourism Development, Port Administration (API) and students from several local schools as part of their social service support to improve tourism service in this very popular port. Good job, Progreso! 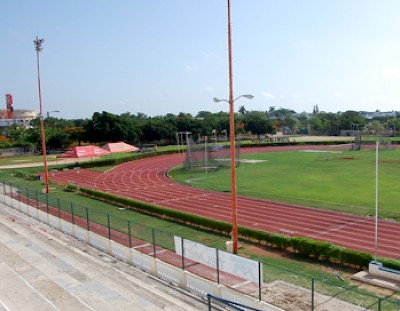 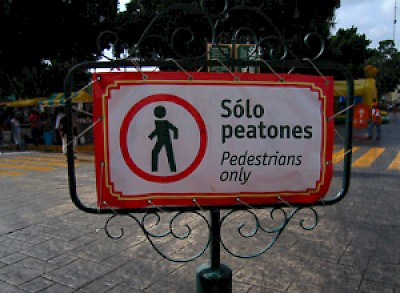