The Mayor of Merida has just announced that Merida will be getting 50 new police agents so that it will be possible to give current police a much better quality of family life and to provide better service to the citizens of Merida. These wonderful men and women have been working on a 24 hour rotation. One can only imagine how difficult the last few hours of a 24 hour shift must be for police agents who have to deal with all sorts of difficult situations.

Bolstering the ranks means officers will be able to work 12 hours on and 24 off. They have also been presented with a new, $1.6 million peso gymnasium.

The new replacements are currently in their last phase of training and should be on the job soon. In an era when there are so many negative stories about police elsewhere, Merida’s police (as well as all of Yucatan’s municipal, state and federal officers) are greatly appreciated for their good work. These new schedules and perks, such as the new gym, are well-deserved tokens of gratitude.

65 applications from 24 countries made their way to MIT’s Seeding Labs Foundation for the 2017 awards. Merida, Yucatan’s UADY Faculty of Chemical Engineering is the first Mexican institution to receive this prestigious international award. The department has 60 full-time professors with impressive academic accomplishments.

Their research is focused on functional foods, biofuels, water treatment, nano-materials, stem cells, sustainable process engineering and logistics. Dr. Marcela Zamudio Maya is the director of the department. Be sure to visit the MIT Seeding Lab website and click on the red banner at the top to see UADY listed with global leaders in science.

Production of guachinango, a species of red snapper and one of the best eating fish in the world, is up 13.8%. It is usually the species of fish that is served fried and whole in Yucatan. Now that production is up, there should be no more shortages during Lent. We suggest purchasing these wonderful fish to cook at home and trying a variety of recipes. Yucatan fries them, but Veracruz (see photo at right) does it best for the taste of many tourists and expats. Many thanks to the fishermen on Mexico’s coasts for having the best interest of the sea and the environment first in their hearts so that we can continue to enjoy the bountiful catches they bring home to share with us and with the world.

Rehearsing the Living Way of the Cross

The week before Semana Santa devotees of all ages are busy getting ready to present the Living Way of the Cross. This is a special year in Sitilpech, Izamal because Gaspar Aguilar Burgos has asked to carry the cross for a second year, this time as a whole and healthy man. Three years ago, while riding his motorcycle, a vehicle crossed the center line and hit him head-on.

It has taken nine operations and all of this time for him to work his way back to perfect health. He wants to play the role of Christ in gratitude for another opportunity to live his life as a husband and father of two.

Downpours quickly filter through Yucatan’s limestone shelf and into cenotes, which allows little opportunity for hay and flowers to grow. The recent drought has increased pressure on these crops, vital to the peninsula’s livestock and honey production. The price of honey is rising due to scarcity. At the same time, the price of beef is dropping from $120 pesos per kilo to $70 pesos per kilo as more animals are being slaughtered because of the increasing cost of feed.

The Indicator of Industrial Activity by Federative Entity (by State), published by the National Institute of Statistics and Geography (INEGI) has just announced that Yucatan’s manufacturing sector closed 2016 with the highest level of growth and total development in the nation, as well as the greatest increase in the 13 years since INEGI began recording economic activity on a state by state basis. This sustained growth is due to the peace, tranquility and quality of education in Yucatan, as well as actually being a contributor to the same characteristics. With the state, the people, and manufacturing working together, there seems to be a brighter than ever future for those who are lucky enough to live in Yucatan.

Congratulations to the students of Miguel Hidalgo y Costilla Elementary School in the Comisaria of Kini, Motul, who won first place in the contest of interpretation of the Mexican National Anthem for Zone 047. Their next conquest will be in Sector 5 on a yet undetermined date.

Many thanks to their parents and teachers for their support of these talented children. They are the future of Yucatan and it is a pleasure to see them winning at every level.

Ensuring the safety of locals and tourists while maintaining a “party friendly” atmosphere is a tricky balance that Progreso, and others along the beaches of Yucatan, are getting better at accomplishing each year. Much of their success comes with zero tolerance for driving under the influence and/or substance abuse of any kind. Petty crimes are usually reported to the police immediately, as is any emergency activity. The goal is to have as much fun as possible, as safely as possible. Of course, the Municipal police, the SSP, a Red Cross ambulance, a fire station, rescue boats, an emergency medical station and ambulance on the beach, the Navy and more will be on hand to make sure that everyone has a wonderful – and safe – Semana Santa. They are already in place and will continue to be in place until several days after the holiday is over.

Explosion and Fire Drill in Peto

There was an explosion, or what sounded like an explosion, in a kindergarten in Peto. Someone said there was a fire in the school and they should evacuate the structure immediately. There was no panic among teachers or children. The children lined up, arms on the shoulders of the child in front of them and marched out of the school under the watchful eyes of their teachers. The source of the explosion is still unclear, but police and firemen arrived immediately for what turned out to be an exciting fire drill.

Fostering Relationships Between Parents and Children

Every year, the week before Semana Santa is the National Week of Physical and Sport Culture. Family activities occur all over the state, and this year we are highlighting Kimbila, a town in the Municipality of Izamal.

On the last day of school before the Semana Santa holidays, the children of Ricardo Flores Magon elementary school went on a bike ride through their town, then headed off to the Pedro May baseball field to meet their parents and fly kites. Eventually, they had more than 100 kites in the air.

Activities like this are part of a long-standing tradition that fosters relationships among families and ensures peace and tranquility in the state as a whole; a win-win for families and for the Yucatan. 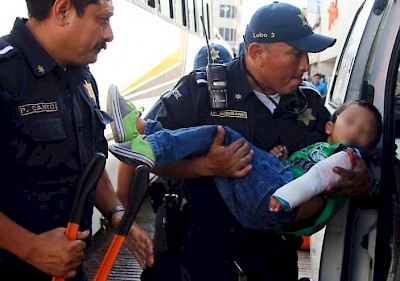 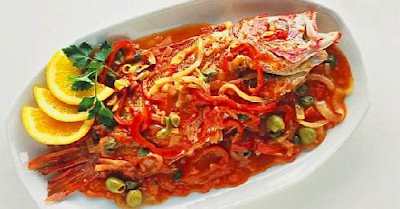 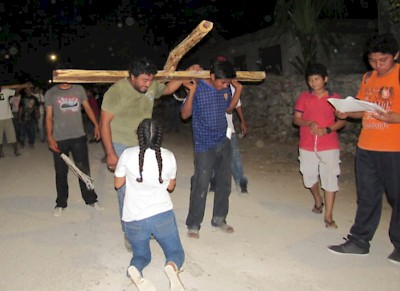 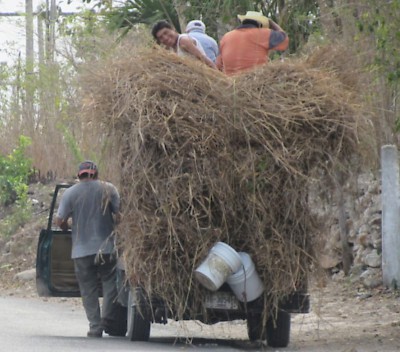 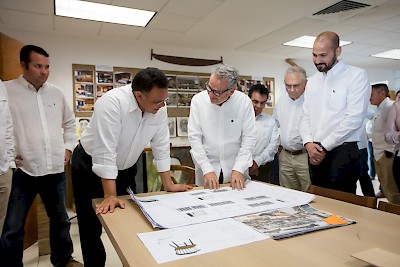 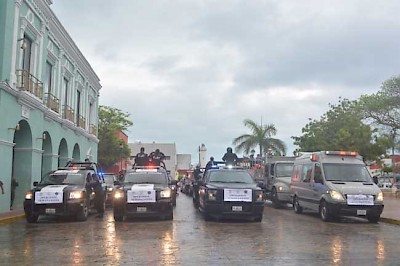 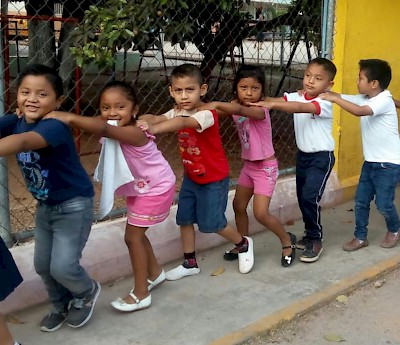 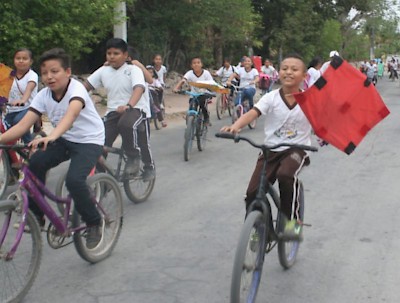