The Municipality of Oxkutzcab is known as the Orchard of the State of Yucatan. Throughout the year, as one successful harvest after another comes in, there are marvelous festivals to remind us of that fact. Each year, the Orange Festival gets bigger and better. This year, the opening ceremony was attended by the first Queen of the Orange Festival, Sra. María Inés Góngora Góngora, as well as a number of dignitaries, including the Governor of Yucatan. Fireworks were, of course, a major part of the evening’s entertainment. Merida is going to have to get busy if it is going to keep ahead of Oxkutzcab and even Valladolid. Both are coming up on the outside fast and their major festivals are well worth a trip outside the city.

Until further notice, the Municipal government of Progreso has decided to provide free garbage collection to port towns from Chicxulub to Chuburna. They explained that many citizens of these towns cannot afford to pay for garbage pickup and, in the interest of protecting the environment, as well as the people and animals that live in the area, it is better to give free garbage collection services than to have the environment destroyed by littering in towns, on the beaches and in the marshes.

Guadalupanos Are On The Roads Again

A total of 31 groups of pilgrims have left Hunucma, some bound for Seybaplaya, Champotón, Campeche, and others bound for points as far away as Mexico City. At least two groups from Yucatan have already left to do part of their Mexico City trip by bus. If you are traveling, even locally, during the days surrounding the Dia de la Virgen de Guadalupe, please drive carefully and watch for the bicycles of the pilgrims. Click on the links to read older Yucatan Living articles about the Dia de la Virgen de Guadalupe and see a video about the Antorchistas Guadalupanos.

The Virgen de la Caridad del Cobre recently came to Progreso, Yucatan, traveling through the beach colonies on a month-long pilgrimage. The statue ended its journey in Progreso before making its way back home to Cuba. It is interesting to note that, at the same time that Progreso was strengthening its ties with Cuba, three teachers from France were also visiting in Progreso. This municipality and several areas between Progreso and Merida, are growing fast and the future looks brighter than ever for the people and the economy.

You know its Christmas when small-town-Yucatan has its Christmas lights up and everyone already has had their picture taken with Santa, the reindeer and the elves. The small town of Uman has already had its Christmas parade, courtesy of Coca Cola, and the local school children have already presented their annual Christmas play. Everybody danced and everybody sang, because Christmas is on its way all over the State of Yucatan.

The White Night (of shopping, cultural and art discounts) has been so successful in Merida’s Centro area that there will be two more La Noche Blanca events held in Merida in 2014, with its range extended to other parts of the city. In addition, this event was so successful in boosting the number of visitors to the city that the notion itself has spread to both Campeche and Quintana Roo. For this December 7 La Noche Blanca, participants included museums, galleries, theaters, alternative spaces, restaurateurs, and private-public agencies, such as travel agencies, home crafts, home exchange, hotels, bookstores, car rental companies, regional clothing stores, art and decoration and shoes. Yucatan Living congratulates everyone who made this community event possible.

With a week of rain, sleet and snow blasting through the United States and Canada, Yucatan can expect afternoon rains, with daytime temperatures of 32 C (89 F) and overnight temperatures of 21 C (69.8 F). All we can say to those who are still NOB (North of the Border) is: “Bless your hearts. We think of you often.”

Planning for the Holidays

There were two important announcements this week from the State of Yucatan and the City of Merida.
• First, for second half of December, the Bici-Ruta is expanding its route to include Paseo Montejo, while both Calle 61 and Calle 63 will be open to vehicular traffic. This is to help those who come to shop in Centro.
• Wine and Liquor: The sale of alcohol has been extended to 10:00 PM during the last Sunday of the month of December. For places that sell both food and drinks, those hours have been extended to include every Sunday in December.

For those who will be north of the border when seedless watermelons hit the grocery stores in February, we thought you might like to know that 510,000 plants are already in the ground and you can expect 6,500 tons of these seedless beauties to arrive on time in McAllen, Texas. We are constantly amazed at the variety of fruit grown in Yucatan and hope that people in other countries pay attention to the stickers on the fruit they buy, just to see where it all comes from. This coming year is going to be one of the best ever for all of Yucatan’s worthy and talented farmers.

Those who are familiar with the area know that Izamal is relatively easy to get to, but still is not on a major highway. However, Izamal has been the home of Catholicism since Diego de Landa arrived in Yucatan and took up residence there in 1549. It is here that la Virgen de la Inmaculada Concepción, patron saint of the State of Yucatan, resides, and here that a statue of her most famous visitor, Pope John Paul II, stands watch. This past weekend, the Queen of Izmal was carried through the streets of the town, by 5,000 faithful followers, after a mass that was given by the Archbishop of Yucatan. That night, at 9:00 PM, 3,000 worshipers were on hand for a traditional serenade to the Virgin that lasted until midnight. 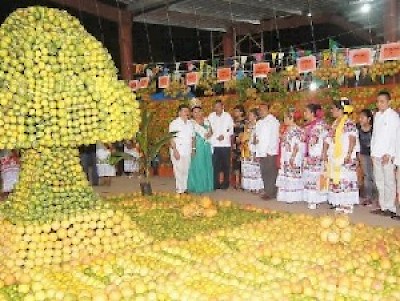 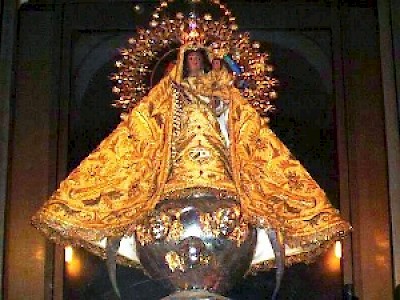 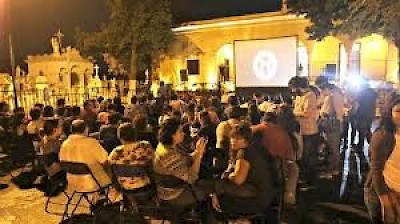 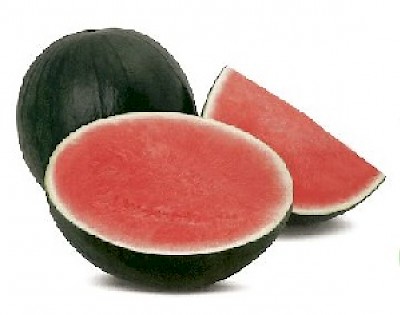