(Felipe Carrillo Puerto, QRoo, Mexico) -- Na’atik Language and Culture Institute will open the doors to their English language library on May 31st. Located in the heart of the Zona Maya, Na’atik is a nonprofit that teaches English to over 200 students from in and around the local community.

“Opening a library here is a bit of a risk,” admits Catherine Gray, the school’s founder. “Libraries were a huge part of my childhood, but they’re not part of the culture here. The region is impoverished, books are very expensive and hard to find, so it’s rare to see people reading or even interested in books. There’s a municipal library, but the collection is outdated and its lending policies are so prohibitive that few people use it for anything other than wi-fi.” Felipe Carrillo Puerto is about 60 miles inland from the beaches of Tulum and surrounded by jungle. The town and surrounding communities have a population of 80,000 with 70% living in poverty.
The school believes that opening a library can bring endless benefits to its students. “Learning a language requires you to spend time working outside the classroom,” says Chris Nott, a Na’atik English teacher. “Taking a book home is a perfect way to do that. And this also helps develop the study skills and love of learning that are the key to success in everything.” Those skills can be life-changing as demonstrated in the growing number of Na’atik alumni who are going on to university, often as the first in their family.

Completion of the library would not have been possible without the other half of Na’atik’s language-learning community. In addition to English courses, Na’atik offers immersion experiences in Spanish and Maya to international visitors through the Study Abroad Yucatán (SAY) program. Some are vacationers who stay for just a weekend; others are students who study for months. All of them give back to Na’atik’s English language courses because 10 percent of the SAY program’s revenue goes directly into the nonprofit. Many go further by volunteering at the school and others become generous donors who have funded projects such as the new library.

In addition to the new facility, Na’atik will be bringing on a full-time librarian to maintain the collection and organize programming. The librarian will also manage student volunteers from the local schools and the SAY program. So far three SAY students have already volunteered for the summer. No doubt many more will be involved as the project continues to grow.

Na’atik is a non-profit language school in Zona Maya, Mexico offering free or reduced cost classes to its local community. Our name comes from the Maya expression “To’on Na’atik” meaning “we’re understanding each other.” We believe that cross-cultural exchange is the key to true understanding. It is only once we understand each other that we can see what is possible. 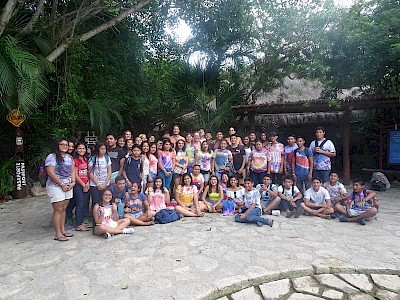