News / Mexican President - Who Will Be Next? Email & Share

Mexican President - Who Will Be Next?

This morning, we woke up early to take the dogs for a walk. On our usual path, which takes us down the Paseo de Montejo, we were surprised to find the park outside of El Gran Cafe crawling with luz y sonido stage techs setting up for a big rally with more political posters than we've ever seen in one place.

The posters were promoting Andres Manuel Lopez Obrador, one of the leading presidential candidates, known around Mexico as AMLO, along with several local candidates. We wondered if AMLO was really going to be speaking three blocks from our house... and decided no, probably not. There are a lot of local candidates on the same PRD (Partido de la Revolucion Democratica - Party of the Democratic Revolution) ticket, shared this year with the PT (Partido Trabajadores - the Worker's Party) ticket, and we figured the rally was probably for all those local candidates. So we thought nothing more of it. After our walk, we went to breakfast at the house of our favorite Fulbright scholar, KAT of KATravels. After a lovely repast and some lively conversation, we headed back home to partake of our favorite Yucatecan tradition: la siesta.

Unfortunately, a significant number of Yucatecos this afternoon were not sleeping at siesta time but were instead gathered at that park at the end of the Paseo de Montejo - three blocks from our house - attending a rather raucous rally we had seen being set up earlier. Unable to sleep and feeling slightly responsible to our loyal readers, Working Gringa decided to sprint over to the park to see what was going on. As she arrived to the rally area, WG worked her way up to the front of the crowd, camera in hand, and found herself staring through the lens at Mr. AMLO himself. Que milagro! Que sorpresa! Not to mention, what timing!

AMLO was wearing two leis (there's probably a Mayan word for this but we don't know what it is) and a crown made of Flor de Mayo (Mayflower). He was dressed in a white guayabera, and surrounded on stage by all the candidates in Yucatan of the two parties mentioned above. Just as WG got into photo position, AMLO began to speak, outlining a number of promises that he was making to the crowd if they would vote for him. WG's Spanish comprehension is good, but not great, so she could tell he was talking about some type of compensation for los viejos (old people) and becas (scholarships) for los hijos (children) de los pobres (of poor people)... but that was about it. The crowd enthusiastically cheered and waved flags at the appropriate times and appeared genuinely excited, despite the punishing heat of the mid-day Yucatan sun.

A lot has been written about AMLO as the presidential campaign heats up. Calderon, the candidate of the PAN (Partido Accion Nacional - National Action Party) which is currently in power, and AMLO are running neck and neck in the polls, with Madrazo, the PRI (Partido Revolucionario Institucional - Party of the Institutional Revolution) candidate trailing third. Historically, there has often been financial and social upheaval around elections in Mexico. But many pundits believe that Mexico is now so economically entwined with the United States that it won't matter who wins this race... whoever becomes President of Mexico will have a much narrower range of possible actions available to him.

If you are interested in this election, here are some recent articles you may find interesting:

Los Angeles Time's Hector Tobar and Paul Richter think the outcome *will* matter in their article "Why US Has Stake in Mexican Election". In that article, Enrique Krauze, who wrote Mexico: Biography of Power, a comprehensive history of politics in Mexico, says that "Politics is the fastest theater in the world. Anything could happen." Great quote!

And here's one in the San Francisco Chronicle, which mentions a subject close to our heart, the spread of computers throughout Mexico but the total lack of options (i.e. all Microsoft, all the time).

The last time we were this close to an actual candidate running for President in the United States, it was Walter Mondale and we remember his advance guard of armed Men-in-Black types as he came onstage in central California. There were no guards in evidence on AMLO's stage... just a bunch of people in huipiles and guayaberas. The AMLO rally looked like a party more than anything else, and now that WG is back home and we're listening to the sounds from afar, the rally has apparently turned into a real party, complete with a live rock band (to see a brief video of the event, go here).

As the skies darken, distant thunder mingles with party music as we prepare for a seasonal tormenta. Time to take that siesta. 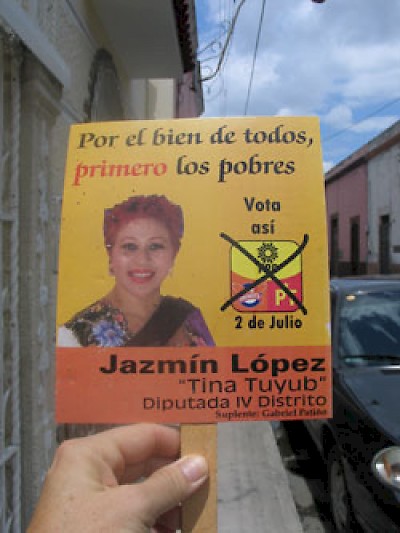 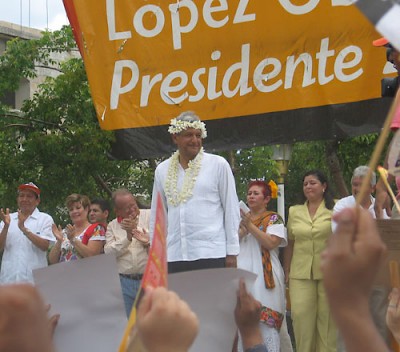 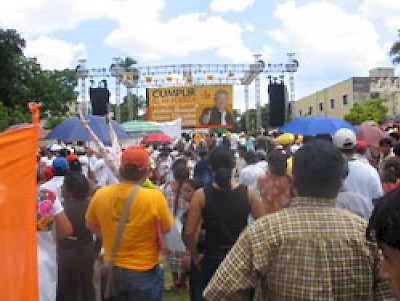 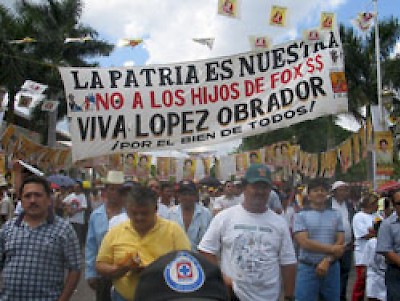