Presidents Calderon and Bush in Merida

Well, what do you know? George W. Bush, the leader of the Western World, is coming to little ol' Merida to visit with Mexico's new president, Felípe Calderon, thus putting Yucatan on the world map once again.

You might recall that back in 1999, just about this same time of year, Bill Clinton flew to this area to meet with then president, Ernesto Zedillo. This was before we moved here, so we really didn't pay much attention to the event. They met at Hacienda Temozon, one of the haciendas we love to visit when we have guests, where we inevitably point out the path to the helicopter pad and tell the story of Clinton's visit.

Curiously, most of the press reports and news articles just say that Bush is coming to Mexico, but they don't mention Merida. Rumour has it that they are meeting here because Merida is less of a security risk than Mexico City, and we believe it because it's true even for us ordinary folks! International Living writes:

Why will they meet in Mérida? Scheduling the meeting in a sparsely populated state instead of Mexico City may be significant. Bush´s popularity abroad is even lower than at home, and major demonstrations are less likely in remote Yucatán, governed by Calderón´s National Action Party, than in the huge, opposition-controlled capital.

See there? "remote Yucatán"! That's us, alright. Remotely away from prying eyes but right next to our WalMart, Sears and Burger King. It's a safe bet there won't be major demonstrations, which are routine events in Mexico City but hard to organize here in Merida where tranquilidad and flojera are the order of the day.

But there's more. Larry Rubin, the new CEO of the American Chamber of Commerce, says that they chose Merida for its strategic geographic location related to development and investment. From various articles like this one in the Banderas News, we have read that Mexico's leaders are seeing this as just one of many encouraging developments in the relations between the two countries.

Bush will be visiting Merida from March 12th through the 14th, according to newspaper articles. Once again, the leaders and their cadre of security and courtiers will end up at the remote and luxurious Hacienda Temozon, far from prying eyes and the public.

We doubt, therefore, that we'll see or hear anything of the visit other than perhaps the sound of a fleet of helicopters flying overhead. That's okay. We didn't come to the Yucatan to be in the center of world political action. Like most Yucatecos, we're a little amazed that they chose Yucatan for their meeting, but we'll be glad when it's over and our world returns to normal. 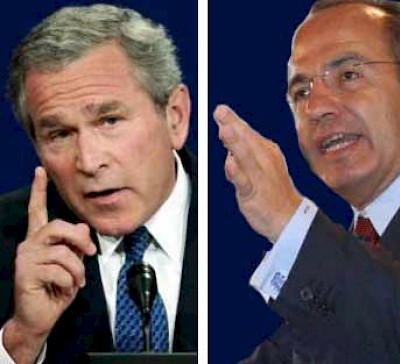