Now that the US election is over, we know more and more people are thinking that maybe living outside the United States would not be such a bad idea. We love the United States but we also think that living outside of it, for some amount of time or the rest of your life, is a great idea. Because there is nothing more refreshing than a new perspective. There's nothing that makes you feel younger like learning a new culture and language. There is really nothing that compares with going outside your comfort zone to explore new horizons and opportunities. With that in mind, here is what we were thinking and feeling ten years ago in 2006, four years after we moved out of the United States, four years before this happened.

The following is the first of a series of interviews with expatriates living in the Yucatan. We decided that in all good faith we couldn't ask our friends and acquaintances to answer these questions if we hadn't answered them ourselves. So we are our first interviewees:

Working Gringos: We moved from California in January of 2002. We had recently lost our jobs at an Internet development company and were trying to start our own thing when the World Trade Center in New York was attacked. That put a stop to just about everyone's business development. For a long time nobody wanted a website and every business in our industry was laying off, not hiring. We had to find work and we had to move to find it.

We call ourselves dot bomb refugees.

We ruled out the San Francisco Bay area and other major technology centers because there was a surplus of workers and the cost of living there was too high. We ruled out Bakersfield and many other inexpensive places because, well..., if we need to explain then you wouldn't be reading this.

We finally decided to make a virtue of necessity and cast our net world-wide. Thanks to the worldwide web we could do that more easily than ever. We made a short list of what we wanted in a new home. Here it is:

1. A place were we can make a living
2. Beautiful house we can own outright
3. Tropical and/or European ambiance
4. Close to scuba diving
5. Learn a second language
6. Live more lightly on the planet (our private code phrase for "eco-friendly and cheap")
7. Be within a day's flight of our family

YL: Why did you choose Merida over other places in the world?

Working Gringos: It met all of our criteria and more. We've traveled around the world. We thought of Tuscany, Bali, Costa Rica, the island of Roatan, but none of these quite worked for us. The combination of Mayan, Spanish, Caribbean and Gulf cultures makes Merida unique. It's also the closest place to the United States that is the most unlike it. And you can make a living here and live for much less.

Working Gringos: Yes, we essentially moved our nascent Internet development company here, bringing all of our computer and photographic equipment with us. Besides, we're not sure what retirement looks like.

Working Gringos: We are doing more than we intended. We figured we would make a few websites for people, live on less, and give ourselves more free time. Wishful thinking. There has been much more demand for website development here than we anticipated, as well as photography.

YL: Did you buy a house right away or rent first? Do you think you made the right decision (either way)?

Working Gringos: We bought two houses. We found a renovated colonial-style house where we live now using the Internet. It was another reason we moved here. Another smaller house was recommended to us by the real estate agent here and we turned it into an office. Considering how much these properties have appreciated in value, we think we did the right thing by buying right away. But we do see the value in renting first and getting to know the area before making a commitment.

Working Gringos: We go back at times to visit family. One of us would consider going back if we were suddenly left alone here... but we would always keep one foot here, even if we did go back. Mexico is home now too. We would rather have our family move here. Then there would be little or no reason to go back, except for the occasional bookstore craving (see below). But can you ever really go back? So much has changed in the U.S. since we left...

Working Gringos: Socially, the Yucatan is a lot more forgiving. It feels like people here have more liberty, that there is a wider range of opinions and backgrounds. It's not as culturally homogenous. It's also very, very affordable. We were being "gentrified" out of our little town in California. But Yucatan, as Ry Cooder would say, "is a poor man's Shangri-La."

Working Gringos: Not pumping our own gas or having to compare gas prices (editor's note: well, everything changes and that has changed...), paying taxes monthly (it's so much easier), the people, music in the streets at night, tropical weather, weekends at the Caribbean, the diverse culture, the food, learning a new language, the VIP movie theater, our friends, the list goes on...

Working Gringos: Browsing in bookstores, Starbucks Gingerbread and Pumpkin Lattes (yes, we still think they taste better in the USA...), hiking in the mountains, ginger Altoids, huge selections of black tea at the grocery store, Trader Joe's... It's always something. But we've lived here long enough that when we're back in the States for very long we miss things like fresh habanero salsa, not looking over our shoulder all the time when we're driving (avoiding speeding or parking tickets), Yucatecan food, big piles of rocks. It's an ever-growing list... and there is something about the Yucatan that we miss when we're not here, but we can't put our finger on it. Must be the magic.

Working Gringos: It's easier than we expected. Demand is high and competition is low. If you're not engaged in a business that has a long tradition in Mexico, then your chances of success are pretty good. That's becoming less true, but we think it's still true.

There is some red tape at the beginning. You have to apply for and maintain the correct visa. You have to itemize any equipment you bring into the country and prove it was either taken back out or destroyed, in other words, that you didn't sell it and dodge import taxes. These days, we just buy our equipment here. Dell, Apple, Canon, etc. all service Mexico. You also need a good lawyer and accountant to watch your back. It's nearly impossible to understand Mexican tax law, but isn't that also true in California? It was for us; except our lawyer and accountant there charged us about 10 times more.

Working Gringos: We work more than ever. At the moment, it's like drinking from a fire hose. Some of the demand is probably related to the times we live in. The Internet was made for places like Yucatan, which is historically remote and unknown.

On the other hand, we don't have to work in a cubicle battling office politics in some sprawling corporation, wondering if what we're doing even makes a difference. The work here has been more fulfilling. And we can and do take a day off here and there to go exploring or to enjoy a long weekend on the Caribbean. We also seem to have more of a social life here than we did in California, because people take more time for friends and family and socializing here.

YL: Is Merida different for residents than it is for tourists?

Working Gringos: Yes, as residents we see a lot of different areas around Merida that tourists rarely visit. We see the modern side of Merida as well as the remote Mayan villages and "undiscovered" ruins, beaches and haciendas. We've been invited to many social, cultural and private events that tourists don't encounter.

Working Gringos: We're getting there. We can make it in almost any situation without a translator. We don't sound very good, but at least we can understand people and make ourselves understood most of the time. The people here are very helpful, too.

Working Gringos: No, not a problem... an opportunity. Really! We learn so much more through the process of taking down the barrier. One interesting thing about the Yucatan is that the majority of people here speak Spanish as a second language. Their first language was Mayan!

YL: What is the one most important piece of advice you would give someone just moving to the Yucatan?

Working Gringos: Be open to magic... it lives here. And if you have a problem with ants, get over it.

Working Gringos: Not yet.

Working Gringos: If one passport is good, two are better. And being a citizen means we don't have to do the visa renewal thing every year.

Working Gringos: Embarrassingly well, considering how we treat Mexicans in the United States.

Working Gringos: 99.99% welcome. While there may be more prejudice against strangers in the Mexican border towns, we don't feel anything like that here. We've even heard locals say that extranjeros treat Yucatecos better than they treat each other. We think that means we aren't as codo (cheap).

Working Gringos: One day at a time. The magic works better that way.

Working Gringos: Only as much as we want it to. We'd like to work a little less and enjoy this city and country a little more. There is so much of Yucatan and Mexico left to discover!

Yucatan Living followed this with many more expatriate interviews. Some of those people are still in Merida, some are not. We welcome your comments and any other questions that you have for the people living in the Yucatan. 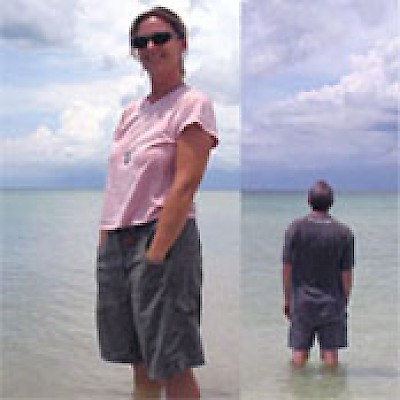