Interviews & Editorials / The Other Campaign on the Mayan Riviera Email & Share

The Other Campaign on the Mayan Riviera

There is the effort to recover the tourist attractions on the Mayan Riviera to their former glory so that tourism can return to the area after Hurricane Wilma. This effort is aided by millions and millions of dollars from the Mexican government, as well as private funding from hundreds of corporations, in order to restore this area to what it has been up until just a few months ago: one of Mexico's most valuable cash cows. The treasure that Mexico has in this stretch of coastline, its perfect white sandy beaches, crystal clear blue-green waters, underwater reefs, Mayan ruins and colonial cities cannot be overstated.

This week, there has been the beginnings of another effort in this same area, just a few blocks but worlds away from the Cancun and Mayan Riviera seen by tourists. Here, in the back streets of Cancun (see photo) where there is little or no running water, no sewage systems and unpaved streets, Delegate Zero, formerly known as Subcomandante Marcos, is ending his visit of the Mayan Riviera tonite with a rally in Cancun's Parque de las Palapas. He has spent the last three days meeting with and hearing from local residents in Chetumal, Playa del Carmen and Cancun about their struggles and their concerns. In each town, he has stayed with a sympathetic resident in their home, held one or two meetings with a few hundred "sympathizers" and people wanting to tell him their problems, and ended the day with a public rally in a park to explain his mission and vision to anyone who attended. Marcos has stayed, and the meetings have been, in the parts of town that visitors seldom see. The parts of town where workers live, build their homes, raise their families and feel left out of the fantastic progress that is happening along the coastal areas that cater to tourists.

Working Gringos have attended almost all of these sessions as photographers. It has been a fascinating process to observe the almost-mythical Subcomandante Marcos up close and personal. He appears to be an incredibly patient man who is genuinely interested in hearing from "the humble people who struggle" in each of these towns. He has listened as fishermen from Isla Mujeres decry the loss of their profession, as students have explained their lack of opportunity after graduation, as old men have raged against the promises and lies of the established political parties, and even as one middle-class Mexican mother explained that she can't explain the side-by-side wealth and poverty in this region to her son. Concerned citizens have sat in front of Marcos for the last three days and poured out their anger, their frustration and their hearts to this man. After a morning and afternoon of listening in each town, Marcos has spoken each night to a gathered crowd about what he has heard, and what he plans to do. He has recounted his impressions of the people he has observed, and then promised that in six months, representatives of the Zapatistas will return to their city to help them to organize their struggles.

In Chetumal, he spoke in a large park, where close to a thousand people listened to his speech while what seemed like a hundred photographers and videographers jostled with cameras and microphones to record the event. In Playa del Carmen, he spoke to an even larger crowd gathered on a soccer field in Colonia Colosio. The crowd was in a festive mood and was entertained by stilt-walking dancers, fire-twirlers and a band before Marcos took the stage. Tonite, he speaks in Cancun.

Marcos speaks, of course, in Spanish. He isn't speaking to the gringo world... at least, not now. He speaks to the waiters, the maids, the bartenders, the chauffeurs, the students, the people with tattoos and piercings, the indigenous, the women...anyone who feels the sting of discrimination, who feels left out, who is poor or forgotten. He is encouraging them to organize and realize the power they have to change the world. For more details on his message and the reactions of people around him, check out www.narconews.com to read articles written by the dedicated bilingual Authentic Journalists with whom we have been traveling the last few days. Their reports are available in English and Spanish text, audio and video. Other reports can be found on http://nyc.indymedia.org. And of course, there is the EZLN website which is logging photos of the entire six month tour.

And stay tuned here for more photos and personal impressions of the events to come in Merida over the next three days. 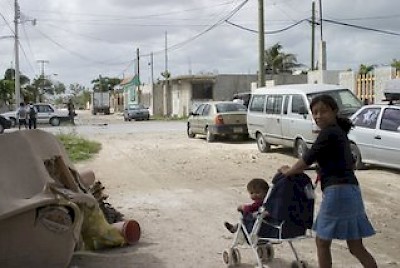 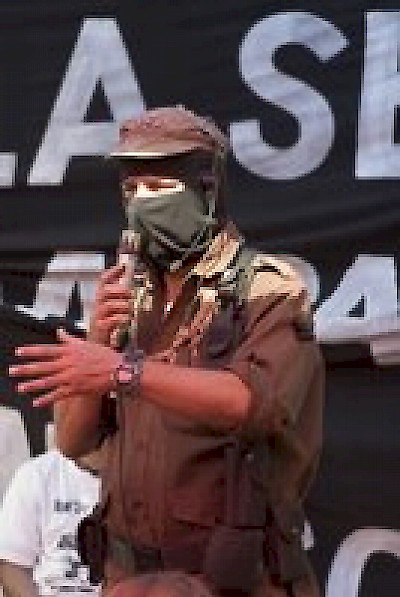