The week of January 11-15 was historic in the city of Merida, as it was the week that various veteranarians, UADY, the city of Merida, the two shelters AFAD and Evolución, and visiting veteranarians from the United States and other countries pulled together and sterilized more than 1000 dogs and cats in and around Merida. While 1000 is still just a drop in the bucket of companion animals in homes and in the streets of our city, it is a beginning. And an auspicious beginning at that. From all reports, the process was well planned, well organized and well attended.

Though the Working Gringos were doing their usually working, we are fortunate to have gotten reports and photographs from various people who volunteered their time to attend and assist at the various locations where the sterilizations were performed. Below are some of their first-hand accounts and below that, a link to the photo gallery with their photographs from this week.

Yucatan Living wants to extend a big WOO-HOO!!! to everyone involved!

From Debbie Moore, who helped coordinate supporters of Evolución:

What an amazing last day we had! I think many of us have been pooped on, peed on, bled on, slobbered on and in some cases, even vomited on….if that isn’t fun I don’t know what is!

Well, today we were in Vergel 1, amore economically challenged area, and as everyone saw, the turn out and community support was just phenomenal. I think it is evident that these are the areas that need the most help. I can’t tell you how many people came up to me afterwards expressing their appreciation. What a wonderful experience.

And again, our turn out was overwhelming. Each clinic has the capacity to do 150 animals and we were up to 158 animals and had to start turning people away. The concern was that Xmatkuil was running over 150 as well, and they needed to insure they had enough supplies for the next 2 days at the beach. At the very end, Dr. Jeff gave the go ahead to do a few more – so we ended up sterilizing 167 animals. Additionally, we took the phone numbers of another 15 or so people. If there are enough supplies at the end of the campaign, Planned Pethood is going to try to do these for free. If not, they will offer a discount. (If anyone couldn’t help at the event, but would have liked to help in some way, we may consider trying to get donations together to pay for the ones who didn’t have appointments and got turned away…just a thought.)

I thought we had another day where overall, everything went very smoothly. The only really challenge we had was working in such a small facility (especially in the recovery room) - this along with the volume of people we had, I think made it more difficult than the day before. But we still pulled it off.

Additionally, we had two TV stations come out this morning to film our work in progress and interview Silvia Cortes about the campaign. Wonderful publicity (thanks Cherrie!). This helps get the word out, because of course we would like to do it again.

Also, if anyone would like to, please consider writing a thank you note to Planned Pethood.One person pointed out to me today how awesome the vets were. They were on their feet nonstop throughout the day working tirelessly on animal after animal. Several stayed late to help us with the last few animals that were allowed into the clinic. I am not sure what their overall plans are, but everyday these guys have been working hard with seemingly no time for any tourist activities in Mérida. Anyway, we want to be sure to express how happy we are that they came, and that we would like to have more clinics like these in the future.

And total thanks goes out to all of you. There would have been absolutely no way to pull this off without everyone’s help. I could see that everyone was tired…it was a long day, yet everyone was still enthusiastic and hung in there. I’m just so proud of our team. Let’s face it, we rock!

As you know, we just completed the 3 days in Merida and it was hugely successful. Each clinic had the capability to do 150 animals and yesterday we went over at both clinics. I am not sure of the final numbers at Xmatkuil, but at Vergel 1 we had 167 animals. The public support was overwhelming....I can't tell you how many people came up afterwards thanking us....it was a great thing to be a part of.

Incidentally, of all the locations, Vergel seemed to be the one where people were just overwhelmingly grateful. You could tell that it was in these areas where this service is needed most. And the vets were all wonderful. They were on their feet working for hours on animal after animal with barely a restroom break. They started at about 8:30am and I think the last surgery was about 6 or 6:30 pm. Those guys are doing a fabulous job.

The 2010 spay and neuter clinics, held in various parts of Merida, Progreso, Chelem and Chuburna, were a roaring success this year. Many groups, local and foreign, contributed time and enormous effort to make this work.
Today in Progreso, people rode up to the clinic in their bike taxis, each carrying four and five street dogs. A stray dog wandered in and we grabbed him as well.
Earlier in the week, we worked at various community centers in Merida and for three days concurrent with the centers, at the UADY School of Veterinary Medicine in Xmatquil. There, we kidnapped the school mascot, an orange cat, and she’ll never have kittens again.
The lines were long, the human customers were patient and appreciative, and the vets and volunteers were exhausted but happy. We had veterinarians from several places in the USA plus the Dominican Republic, Guadalajara, and cities in Baja, California.
The totals aren’t in yet, but we sterilized hundreds of dogs and cats, both male and female. We expect this to at least make a dent in the proliferating population of feral animals in our area.
A special word about the volunteers. They were fabulous. They picked up and delivered pets to people who had no transportation, they helped Kim the injection lady by holding down anxious animals for sedation, they shaved and prepared dogs and cats for surgery, they assisted in the operating rooms, comforted waiting pet owners, tended to the pets in recovery, and registered everyone.
In Chuburna today, one of our American vets found tumors in a dog and worked hard to remove them. The owner was delighted that his dog, Hueso, had this surgery.
The only ones unhappy about this campaign were the dogs and cats. They screamed and hollered, but will now lead happier lives. That makes the whole team who worked on this project very happy. We look forward to next year.

I was quite impressed with the veternarians standing all day from 7:30 AM until 3 PM before they took a break! Two were from Slovakia plus they brought one vet tech with them. They only came to Merida for this clinic! I was also impressed with how many volunteers were there, how hard everyone worked, AND the love and detailed attention given to all the animals in recovery. Cardboard carpeted the floor, cats were put into cardboxes and covered with cloth; dogs were covered with newspaper and volunteers and vet techs monitored them.

I will tell you I was amused at some of the pet carriers, especially the bird cages minus birds but with a cat or cat inside. Several cats were in bolsas, as requested. As you probably know it's so much easier to inject anesthesia through a bag. People were so pleasant and most of the animals behaved well also!

I am astonished that 1300 appointments were made and even extra people showed up. It's been an incredible amount of effort from those coordinating supplies, appointments, veterinarian housing, locations, etc.

For a first time effort, what an incredible success! Planned Pethood, Evolucion, AFAD and whoever else was involved in organizing this massive effort should have a special place in heaven for this clinic and the animals and people they've served!!

What impressed me the most was the number and enthusiasm of the Yucatecan volunteers. When I arrived at 7:30AM, they were already there and actively involved in setting up the place. I was only there until noon; they were still going strong.

The clinic was well organized starting with the registration. People came with their animals in mesh bags (like oranges come in), cardboard boxes, crates and anything that would contain them. They signed in and waited patiently. It was interesting to watch a sense of community grow among the people as they waited. The next step was getting/giving more information about vaccinations, having the animal weighed,etc. Then the animal was cleaned. While that was happening, the technician in charge of the anesthesia was preparing the syringe with a sedative and another with the anesthesia. And so it went. The veterinarians who performed the surgeries were Mexican, Czechoslovakian, and Americans. Some people from the veterinary college came and did blood studies on all of the dogs while they were in recovery after surgery. There were expats from Canada and the US helping throughout the process and there was a real sense of contributing to the welfare of the animals of the Yucatan. The people who brought their pets seemed pleased to have the opportunity to have their pet spayed or neutered.

Thanks for suggesting that I take part. It was fun.

A Good Time Was Had by Almost All

So it seems like everyone enjoyed the experience, except perhaps the animals. And though perhaps it wasn't their favorite day, the fact that they are healthy, cared for and that there will be less animals in the future is good for them, good for their families and good for the Yucatan.

Bravo! We look forward to reporting on and supporting many more of these events to come.

For more photos, check out our Photo Gallery (linked at the top right of every page)

WHY we do this: Companions to None (not for the faint of heart...)

And this will make you think (from here):

EXPONENTIAL GROWTH: The larger the quantity gets, the faster it grows. The social issue of dog and cat overpopulation is unique and must be dealt with using a
combination of spay neuter initiatives, ordinance measures, and animal control programs.

ONE FEMALE DOG
Keep in mind some dogs will have more than one litter per year and females often represent more than 50% of the litter. For simplicity here the totals are based upon 1 litter per year with females at 50% of each litter. Take the original mother and add to the females in each year’s litter for a total of reproductive females. NOTE: The first year is four females of the six total puppies. 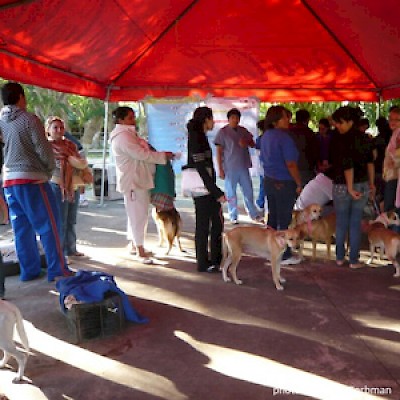 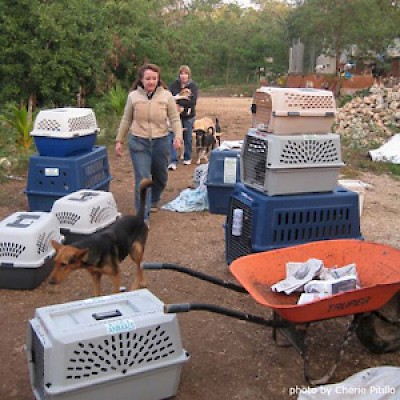 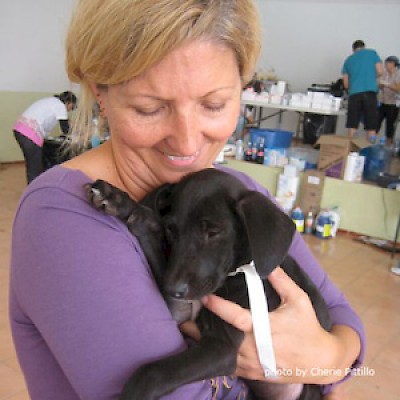 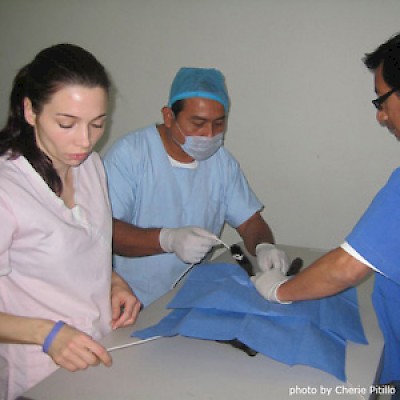 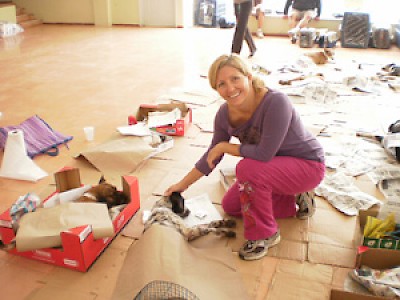 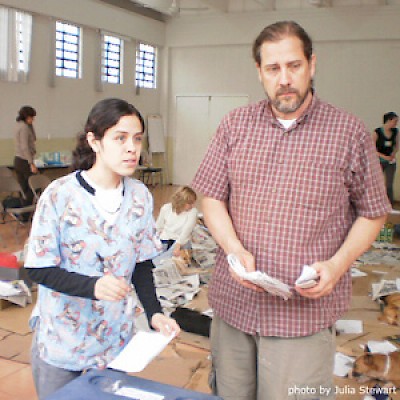 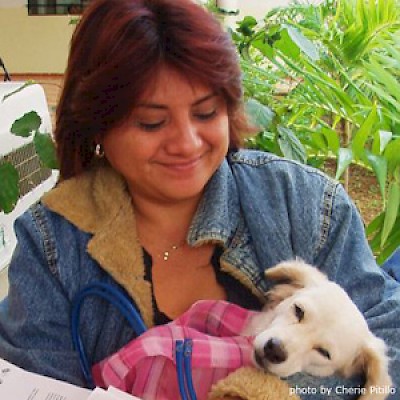 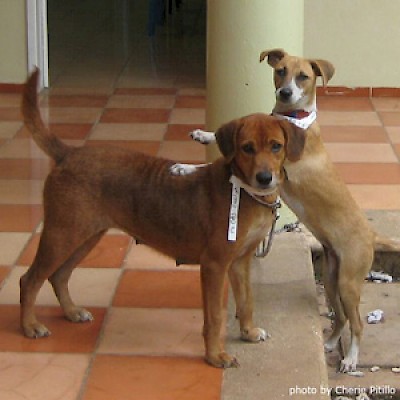