As we write this, José Adán Pérez is probably drinking his Emergen-C in a glass of water (at room temperature, por favor) , having spent about ten days in almost back-to-back rehearsals with local and visiting artists preparing for Merida’s performance of The Barber of Seville.

The Barber of Seville, subtitled, “The Useless Precaution” (after all our research, we’re still not sure why), was first performed in 1816 in Rome. One hundred and ninety three years later, this Italian opera is being performed here in at the Teatro José Peon Contreras, beginning May 29th. José Adán Pérez is the baritone performing the lead role of Figaro and has traveled from his birthplace in Mazatlan via Mexico City, Philadelphia and Los Angeles, a journey that has taken only twenty-nine short years, to bring us his interpretation of this traditional role.

José did not start life as an opera singer. He was sent to music lessons as a child (violin and piano) to keep him busy after school and off the streets. His parents appreciated classical music, but when it came time to choose a career, they encouraged him to get his degree in engineering, which he did… from Tecnologico de Monterrey, Mexico’s MIT. After graduation, he worked as an IT professional in the hotel industry in Cabo San Lucas, later moving back to Mazatlan for awhile, and then to Toluca to work at General Motors while he studied for his masters in engineering.

It was during his brief stint in Mazatlan that José started singing with an amateur chorus. He liked to sing. His music lessons taught him how to read music, and before long, his innate talent was recognized by the choral conductor. With that encouragement, he decided to take voice lessons, to see if he could develop that talent. When he moved to Toluca, he continued his lessons, eventually auditioning for and winning a scholarship to Mexico's most prestigious Young Artist Training Program, the Sociedad Internacional de Valores Artisticos Mexicanos (SIVAM).

Like most beginnings in the arts, this award was no free ride. José spent his days working in Toluca and his evenings and weekends studying opera for one year… a grueling schedule of commuting and sleep deprivation. Finally, in February 2005, after auditioning in Mexico City and winning a scholarship to the Academy of Vocal Arts in Philadelphia, he was able to quit his day job and devote all his energies to his singing career. José moved to Philadelphia in August of that year to gamble on a second professional career. One of his supporters in Philadelphia, Benjamin Ramirez, now lives and paints here in Merida. It was Benjamin who brought José Adán to the attention of Conductor Juan Carlos Lomónaco.

In less than four years, José’s voice has carried him to places as far away as Switzerland, Tel Aviv and Aspen, landing him where he is today: at the Young Artist Program at the Los Angeles Opera in California. Along the way, he met his wife, Kimberly Henshaw, a singer also and a native of Louisville, Kentucky, and he won many awards and prizes.

The Young Artist Program in Los Angeles is a prestigious placement, given to between 8 and 10 people a year, and is an unequaled opportunity to learn and study with the best. The program is overseen by Placido Domingo, one of the world’s most famous and beloved opera singers. That José has been included in this program is one of many clues that he has a bright future ahead of him. A three-year paid residency, the Young Artist Program has only twelve artists participating this year, and only one baritone. Because Los Angeles is one of the four biggest opera centers in the United States (can you guess the others? Sure you can: New York, Chicago and San Francisco), José is privileged to study with accomplished directors, musicians and other opera singers… not the least of whom is Señor Domingo himself. He also is chosen to participate in smaller parts in the world-class productions put on at the Dorothy Chandler Pavilion. José’s professional debut was in Los Angeles in La Bohème… not a bad start. And this coming winter, he will sing two performances as Figaro in the Matinee Performances, which are educational programs for children, and seven performances as Fiorello as part of the main cast, performing with Juan Diego Flores and Joyce DiDonato.

When we met José, it was in the breakfast room of the El Castellano hotel in Merida Centro where he and the other visiting opera stars are staying. He was cheerful and talkative, and only his confusion of speaking English to the Yucatecan waiter gave a clue to his lack of sleep from a late rehearsal the night before. He treated his background and history very lightly, making it seem as if he just fell into his scholarships and prestigious programs. He smiled and laughed a lot, and expressed his enjoyment of his life in opera. Overall, we had the impression not of a brooding serious artist, but a lighthearted creative soul, determined to make the most of his good fortune. Maybe the fact that he spent a few years installing network routers and managing information technology projects gives him the perspective he needs to know how lucky he is.

We asked him to tell us about The Barber of Seville… what should we look for when we see it? What is interesting about it? According to José, this is a long opera (about two and a half hours) in two acts. It is a comedy that has been performed everywhere in the world… most opera buffs are very familiar with it, and even those of us who can’t pretend to be buffs will still recognize some of the music. He told us the play wasn’t successful at first, but eventually became one of the most loved operas… it was Beethoven’s favorite. The opera was one of the first works of art to show lower class people mixing with those from the upper classes, and Beaumarchais, the original author of the story, was put in jail for his trouble.

José also told us it is easier to portray tragedy than comedy as an opera singer. It’s easy to make your face look sad when you are singing opera, and the music does the rest. But a comedic opera demands more physical acting, singing of course, and comedic timing as well. Performing an opera is like running a marathon, he said, stirring his Emergen-C. You just walk through it (or sit, in the case of the sitz probe or seated rehearsal) while rehearsing… and save your energy for the actual performance.

Oh, and he likes Barber of Seville, because the baritone is the star: Figaro. (He has performed the role twice in public before: in Philadelphia in November 2006 and in Mazatlán, México, in November 2008). The music is challenging and demanding (You know that song… Figaro! Figaro! Fiiiiiigaaaaarooooo!), and he likes a challenge.

The climate of Merida is presenting another challenge to this Figaro. The hot weather makes everyone tired, and rising to the demands of the marathon is that much harder. The humidity, of course, plays havoc with the instruments, including voices. And then, there was the fire in the theatre, four days before opening night. (Our new friend Ted, visiting from Alaska, suggested they call it The Bombero (fireman) of Seville for this reason…). The fire caused about 3 million pesos worth of damage, mostly to the curtain, but was thankfully gotten under control muy rapido by the Bomberos of Merida, and now, the show must go on!

Years of preparation have gone into the performance that we are about to see, as with any opera we suppose. José and his costars have spent hours learning the words to the opera, but also taking Italian lessons so that they understand what they are singing (José also studies French and German for that reason). They have worked as much as possible with a répétiteur, a piano player and vocal coach. They have taken acting lessons. Curiously, José told us that they do NOT study the performances of other singers. That is apparently verboten. It is forbidden to videotape an opera performance, of course, unless you have express permission which includes agreements to pay all the performers. José might see a performance or two in person, but mostly he is left to his own unique interpretation of his role, with some input from the written music, his coaches and directors.

And while José has performed many roles on stage, there is very little to be seen of him on YouTube, and what is there suffers from poor quality. In this day of ubiquitous technology, in opera at least, the live performance is still the most important thing. You just can’t get “it” sitting at home in front of your computer or your television.

After spending a morning with José, we came away with the impression that an opera performer comes onstage standing on the shoulders of the teachers, performers and supporters who have put him there. He or she carries the weight of historical responsibility to represent the role in a way that both pays homage to the performers that have gone before but also, reinterprets the material in a fresh way. That is the curious burden that must be assumed and then discarded in order to relax the body and free the voice so it can soar.

Don’t miss this opportunity (and any others, we dare say…) to see this dedicated young soul in a live performance. Only the continued attendance of appreciative fans will keep young men like José choosing opera over network routers. 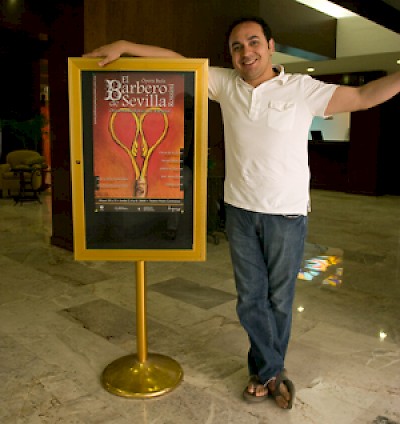 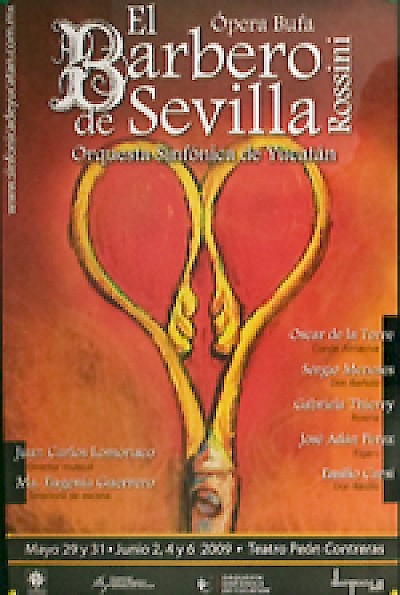 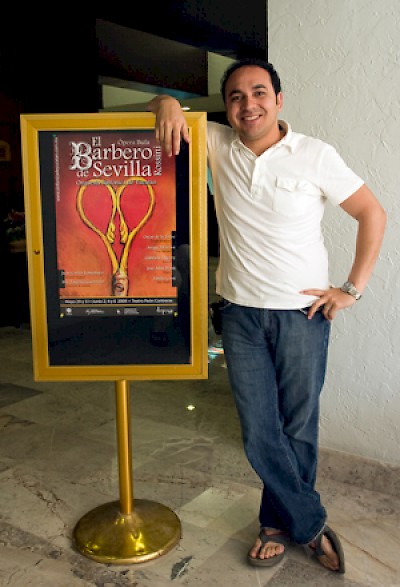 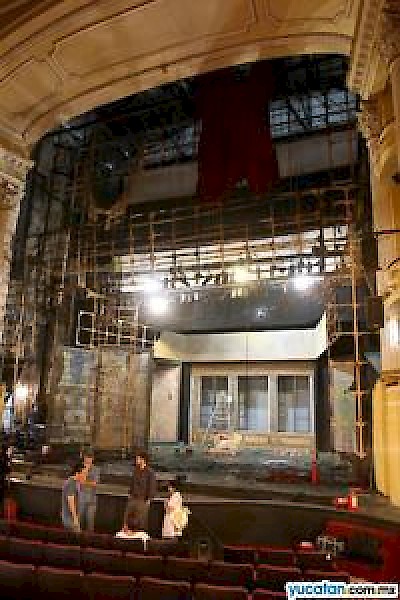