We're willing to bet that if you've read anything about Mexico in the mainstream media lately, you've read something about either the violence in Oaxaca or murders in Ciudad Juarez or the contested presidential election that left the losing candidate declaring fraud and not recognizing the decision of the election commission. The papers are always happy to print bad news about Mexico.

And if you're like most norteamericanos, these news stories have probably left you feeling uncomfortable about traveling to Mexico and especially about living here. Reading the U.S. State Department's Travel Tips might give you pause for thought, as they warn against crime "in Mexico" and encourage you to register with the embassy whenever you travel to Mexico so they can contact you in an emergency.

But we invite you to imagine that you are a foreigner contemplating a trip to the United States, knowing as much about it as you do about Mexico. You might read headlines about snipers randomly shooting people near the nation's capital, or men locking themselves in classrooms to rape and kill schoolgirls, or drive-by murders between gang members, or mothers drowning their babies. You might read about brutal police tactics using rubber bullets, tear gas and Tasers against peaceful demonstrators. You might read about drug enforcement officers mistakenly breaking into the wrong homes and killing the inhabitants. You would read how business executives become politicians who make laws legalizing corruption and then retire to become lobbyists (or vice-versa). You might also read how a majority of people voted for a presidential candidate who subsequently lost due to questionable election rules and court decisions.

As a U.S. citizen, you might be offended to learn that the country of apple pie and baseball does not seem so wonderful when a foreigner reads about it in the papers. You might want to say, "wait a minute, that's not my country!" As a U.S. citizen you know these incidents - while unfortunate and true - do not affect everyday life for the majority of people. You know that there may be problems, but there is so much more to experience in the U.S. than these stories tell.

We have lived in Mexico for several years, and we know that everyday life here is not affected by the headlines. There is so much more to life in Mexico than the stories told in the newspapers.

We have lived in the heart of a Mexican city, in the Centro Historico, just five blocks from the zocalo, in Merida. This city's population is approaching one million. We live on a busy block that has private homes as well as businesses ranging from dental equipment suppliers to doctor's offices to a printing press. On the corner is a local cantina, La Bar Negrita. On another corner is a tendejon, El Motor Electrico. There is also a bed & breakfast called Hotel Marionetas and a public parking lot.

We have a simple lock on our front door. We leave our interior doors to the patio and back yard open, unless it rains. We park our SUV on the street. We walk to and from our office, the zocalo, Paseo de Montejo, and any other number of places at all times of night and day. When our 16-year old daughter lived here, she would walk to and from a friend's house at night by herself. Now and then, we absent-mindedly forget our purse or wallet in the car. Other times, we have left something valuable in the car, like a camera, while we do our errands around town. We aren't stupid about it... we just aren't paranoid.

We have been stopped by policemen on occasion for minor traffic "misunderstandings". Most of these were legitimate, while a couple seemed inappropriate, but we were always treated with the utmost respect by those policemen and have never been in a situation here in Yucatan where anyone expected us to pay la mordita (a bribe).

Sure, you can find stories of people who have been robbed. There have been several murders in Merida since we moved here, but these are surprisingly few given Merida's size. There was some violence around one of the local newspaper offices a few months ago involving a home-made bomb. There are often political rallies and demonstrations, almost always peaceful. The most violence we've seen was when the city wanted to change the local bus routes and the workers from the surrounding pueblos arrived at the zocalo armed with stones to protest. A tear gas canister was fired at the crowd, but by midnight the mayor had restored the original routes and the protesters went home. It's not always tidy in Mexico - this isn't Switzerland - but the problems in Mexico that we confront are nothing compared to what U.S. citizens living in big cities accept and live with every day.

Yucatan has something special going on. There's a peaceful co-existence here between people from many different cultures and walks of life that you seldom find in other parts of the world. Yucatecos live and let live. Little has changed and much has changed, producing a culture of tolerance, patience and amable (kindness). Why has Mexico in general and Yucatan in particular developed in this way? Maybe it has to do with the relative isolation this part of the world has endured for many years, but is enjoying now. Maybe it has to do with learning the lessons of their violent history or maybe it's the survival of their indigenous traditions or the ingredients in the food or the dawn of a new Mayan age in the year 2012. Maybe it's because it's really hot here for half the year and nobody can get up the energy to cause trouble. Quien sabe?

Whatever it is, if you are inclined to explore Yucatan, please read those news reports about Mexico with un grano de sal. Remember that Mexico is a very large country and places like Oaxaca and Yucatan are farthar apart than France and England, not just geographically, but culturally as well. Don't take the word of a few journalists wearing gringo-tinted glasses whose job is to write stories that sell papers. Come down to the Yucatan and find out for yourself what life here is really like.

Yucatan and Merida remain as they have been: muy tranquilo.

Want to know more about safety in Mexico? Read this fabulous article by a former television producer who now makes his home in Queretaro. 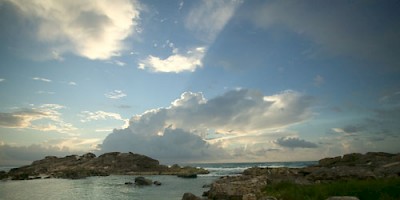