Editor's Note: When we heard about this new Rotary Club in Playa del Carmen, we thought it not only sounded like a great idea for the people living in Playa, but an idea we hope some enterprising expatriates in other parts of the Yucatan might want to copy. Here's a brief report on how the only (so far!) English-speaking Rotary Club in this district got started and the programs they have been involved in so far. We often have people asking us how they can help with some of the problems they see all around them... this seems like another great way to get organized and leverage the power of the Rotary organization to do some good.

About eighteen months ago, expatriates Trish Youngstrum, her partner Bob Hyde and their friend Doug Morgan, all former South Florida Rotarians now living in Playa del Carmen, were enjoying a drink at La Ranita, a bar popular among expats in downtown Playa. They saw the iconic Rotary Wheel logo mounted on the wall and asked the bartender about the sign. Soon they found themselves chatting with Thed Petterson, a member of the well established Club Rotario de Playa del Carmen, the local Playa del Carmen Rotary chapter. After visiting Club Rotario with Thed a few weeks later, the three realized how much Rotary had meant to them and how much they missed it. And thus the idea of an English speaking Rotary Club in Playa del Carmen was conceived.

The three returned to Club Rotario and shared their idea (which by now had morphed into something like a plan). Club Rotario enthusiastically agreed to support them and to be their “sponsor club”, an important element of Rotary protocol when a new club is started. They also secured the support of the District Governor of Rotary District 4200, who has responsibility for Rotary activities in Quintana Roo, Yucatan, Campeche, Oaxaca, Tabasco and Chiapas.

In the beginning of February 2012, the three began contacting friends and acquaintances in Playa, asking them to attend an organizational meeting. The first person to respond positively was J.J. Johnson, owner of the then-brand-new Wah Wah Beach Bar. J.J., with typical brevity, said “We’re in!" And thus the very first organizational meeting was held on Tuesday, April 24, on Wah Wah’s upper deck, overlooking the Caribbean, with 31 people attending, including five attendees from the sponsoring club. The English language Rotary chapter in Playa has been meeting for lunch every Tuesday since. The humble author of this article is the current president, and president-elect Doug Morgan (pictured above) is due to take the helm on July 1.

The 31 original attendees quickly evolved into about 16 hard core enthusiasts and word of mouth took over. By late June the Club had elected officers and directors, adapted the standard Club Constitution and By Laws, and was granted “provisional” status by Rotary International. Within another 60 days, the Club had the 25 members necessary to be granted its charter, had completed all the necessary paperwork and paid the necessary fees. On September 6, 2012, the English speaking Rotary Club of Playa del Carmen Seaside was granted its charter and officially joined the Rotary family. It is perhaps the only English-speaking club (so far!) in Mexico and is, for sure, the only one with District 4200.

On January 19, the club had a gala Charter Dinner Celebration at its meeting site, Origenes Marisqueria and Bar, again suitably located overlooking the beach in Playa del Carmen. The evening began with a dramatic presentation of the Mexican Flag by members of Playa’s Police Department and Drum and Bugle Corps, and a performance of the Mexican and Quintana Roo anthems. All speeches and remarks were translated to and from Spanish and English by well known Playa entertainer (and club member) Renato Lopez. The big moment arrived and District Governor Normando Medina Castro presented the club with its Charter and officially inducted club members into the Rotary family.

What Rotary Does in Playa del Carmen

The club is now 33 members strong (and still growing) and has a distinct international flavor. Its members are primarily American and Canadian expatriates, but include a number of Mexican professionals as well. The club and its members are already active in the community, providing needed school supplies to children at Pelopides School and volunteering for weekly English reading sessions with the Pelopides kids. Members have donated dozens of Christmas gifts to Christmas Dreams, a Playa organization that helps needy Playa children have a merrier Christmas, and provided both necessities and “girlie things” at Christmas to the residents at Casa Yoliguani, a facility for unwed and expectant mothers in Playa. Their latest project has been to collect used computers which, combined with donated software, will facilitate science, math and language learning for Playa’s grade schoolers.

Some other projects taken on recently by Rotary members in this club include painting a playground in a local park. The members have also taken tours of a local performing arts center still under construction, the local DIF offices and have listened to talks given by people as diverse as the man who started and grew Playa's local Fire Department and the astrology writer for the Huffington Post. They have had visitors from Rotarians in other parts of the world and are always inducting new members. In February 2013, they are now participating in a Rubber Duck race organized by all the clubs in Quintana Roo. Anyone can contribute and sign up to win for $120 pesos and the first prize is a house in Cancun.

“Rotary is about service, about commitment, and about giving back,” said Club President Bob Hyde. “Whether it’s Rotary International’s 25 year battle to eradicate polio, or a bunch of Playa Rotarians cleaning up a portion of beach on a Saturday morning, we’re proud to be one of over 34,000 Rotary Clubs, with 1,200,000 Rotarians, all doing their part to make the world a better place”. 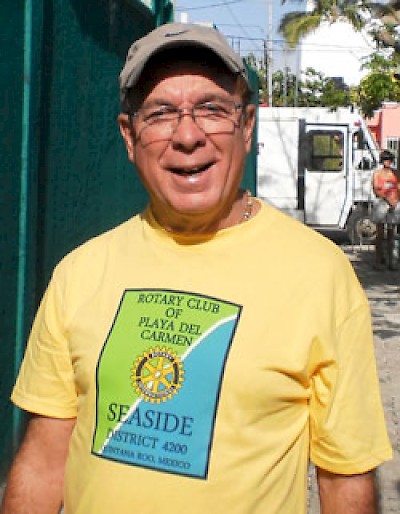 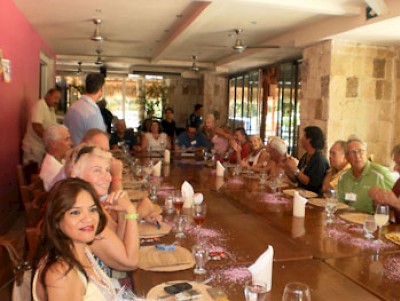 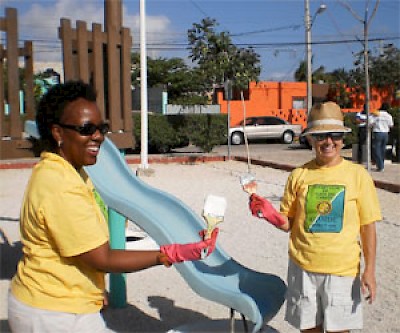 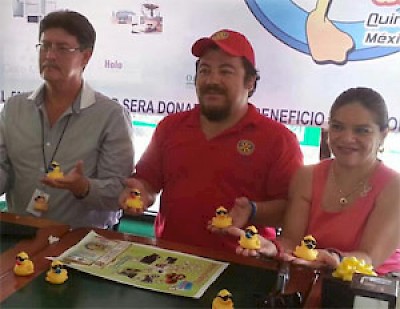