Paula: I moved to the Yucatan from New York City. Brooklyn to be exact, in August 2002. Why I moved here is still an unanswered question for me. I am, or was, one of those New Yorkers who just saw no reason to cross the Hudson. On a quick trip with my brother to Merida, I saw the error of my thinking. Lights began flashing, bells began ringing and the next thing I knew it was two days later and I had purchased a house.

YL: Why did you choose the city you now live in over other places in the world?

Paula: I don’t really have an answer for that. The bells rang, the lights flashed and the force took over? Magic of the Yucatan?

YL: What did/do you plan to do after you move(d) here?

Paula: I wasn’t quite sure. A big consideration was to open an art gallery, which I did. However, it took almost one year to renovate and explore the art world here before opening the gallery.

Paula: Yes, only on a larger scale than first anticipated.

Paula: I bought my house before I moved – before I really knew the city. My decision for me was right – visit a city for two days, buy a house, and move six months later. I never recommend that anyone ever be as compulsive as I was!

Paula: I still love New York and would live nowhere else in the States. But to return to live permanently? Not in this lifetime.

Paula: What do I love? What’s not to love?

Paula: A good cup of deli coffee, a bagel with a schmear and the Sunday Times.

Paula: Fun. The people I interact with are wonderful. Even the government offices are pleasant to deal with (believe that!). Regulations and licensing is much less constricted and easier to deal with.

Paula: No, running the art gallery is sufficient.

Paula: The amount of work is equivalent, but the tranquility of the work is much greater.

Paula: Lucky for us – we get to stay!

Paula: Not as good as it should be. I came with a smattering of New York “subway” Spanish, which turned out to be absolutely useless .

Paula: Not so far. A few words of Spanish go a long way particularly since almost everyone speaks some level of English. Shame on me for not being more fluent!

Paula: Forget everything you think you know about real estate, construction and what else you may have read on the numerous websites about Yucatan because very little of it actually applies.

Paula: Yes, it’s a matter of one more year.

Paula: I’m fortunate to be allowed to live here. To be a good citizen, you have to really be one.

Paula: The people of Yucatan couldn’t be friendlier.

Paula: It’s an emerging economy. The belief that you can do anything in the States is a reality here. The ability for me to open a successful art gallery in New York is out of the question. But here, I can and did.

Paula: To continue selling art and exporting outside the peninsula.

Paula: My business has outgrown its current space. We have purchased another building and are in a transitional phase.

Paula: Every morning I awake and thank the forces that rule the universe for directing my path to paradise.

Paula Sievert owns Galeria Merida which is in the process of moving to its new home in the Mejorada district of Merida. 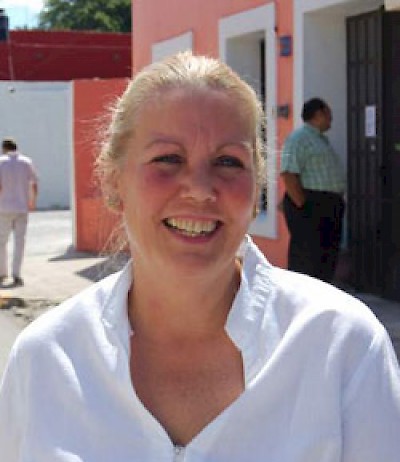