This morning, Australian movie star Mel Gibson is on the front page of our local Merida newspaper. The story is buried on page 9, but Mel Gibson's bearded (very bearded!) face is staring back from the front page of every newstand we passed this morning. Apparently he visited Edzna, a Mayan archaeological zone in Campeche yesterday. Edzna is a possible location for his new film, "Apocalypto" which, according to the article, will begin filming November 15th in Veracruz. Though he doesn't speak any Spanish, Mel told the newspaper reporter through translators that he was very impressed with the significance of the Mayan culture, the beauty of the Mayan ruins and the hospitality and support of his hosts, and that Mexico is dear to his heart. After spending time with his collaborators and assistants at Edzna, he hosted a lunch for his team, as well as the governor and secretary of tourism of Campeche.

The article also reports that Mel is staying at the beautiful renovated Hacienda Uayamon, one of the Starwood collection of luxury hotels. Uayamon is one of five haciendas renovated with the help of the locally famous architect, Salvador Reyes Rios. Other haciendas renovated by Reyes Rios include Temozon, San Jose Cholul, Santa Rosa and Petac. The haciendas (and houses he has renovated as well) are restored with impeccable taste. If you ever get a chance to stay at one, jump on it!

The reporter ended by saying that Gibson said he loved the shrimp he'd been eating here... and that he was joking and in a good mood. Now that's important!

So it seems that the Yucatan portion of the movie is going to be filmed either at Edzna or at some location where they are going to reconstruct a city that might look like Edzna once did. Still, no one really knows what the story is, except that it will be spoken in Mayan. Will it also have something to do with the Mayan End Days of 2012? 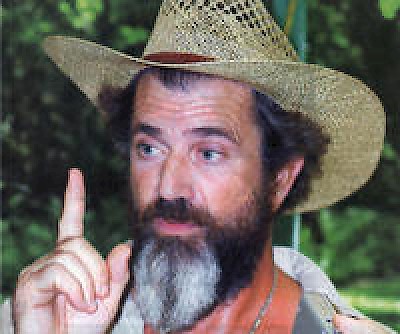