Jason: I arrived in Mérida, Yucatán during the early morning of January 1st - about five months ago. I’m a resident of New Jersey and a student at the University of Michigan, in Ann Arbor.

YL: Why did you choose this particular program to attend?

Jason: Though I’m a student at the University of Michigan, I’m participating with a study-abroad program through Rutgers University of New Jersey. I chose the program, primarily, because it operates in Mérida; the programs through U of M operate in other parts of México.

YL: What kind of a program are you in? What classes are you taking?

Jason: The Rutgers Program is a full-immersion program in the UADY (the Universidad Autónoma de Yucatán); we have the opportunity to choose classes in any of the facultades and take classes alongside other Mexican students. I’ve been studying at the Facultad de Ciencias Antropológicas and I have four classes: Latin-American Literature, Caribbean Literature, Mexican Anthropology, and an International Relations course.

YL: Where do you live while you are here? How are the accommodations?

Jason: I live with a Yucatecan host family in Mérida and I couldn’t be more pleased with the accommodations. Adapting to new living arrangements can often be difficult (whether that means moving from home to a dorm at school in the U.S., or moving in with a host family in another country) but the transition was definitely a smooth one. In fact, I live much more spaciously and comfortably here than I do in my Michigan dormitory.

YL: How is living here different from your school accommodations back home?

Jason: Living with a host family is much different than living in a dormitory; it calls for a lot of responsibility and respect. While I have a great relationship with my host family, I always keep in mind that I’m a visitor in someone else’s home. I’ve had to adapt to the way they live, the way they eat, and their schedule. There’s no late-night Chinese food delivery like there is in Michigan; there’s no wireless internet. And I suppose that this adaptation is what makes the experience so special - I’m learning to live like a Yucateco. That’s why I’m here.

YL: Has living here in the Yucatán been what you expected it to be? What did you expect and how is it different?

Jason: This is a slightly tricky question for me to answer. The fact is, my father in the United States lived in Guadalajara for many years and graduated from the Universidad Autónoma de Guadalajara. So, ever since I was very young, we have always spoken about his experiences living in México. I came with some idea of what living in Yucatán would be like—what my classes would be like, what the heat would feel like, etc. - and so it hasn’t all been surprises. But at the same time, I’ve found Yucatan to be much different than other parts of México - it maintains distinct traditions that originate from a history rich in diversity and culture. There is a clear presence of Mayan, Caribbean, and even European influence here in Yucatan, which is something that really has surprised me.

YL: Are you learning more inside the classroom or outside?

Jason: Outside, most definitely! I arrived in México with a clear understanding of what a study-abroad experience should be all about; it should be about getting to know the culture, the language, and the history of this area first-hand and not through the words of a textbook. Living here in México has really proved that there’s so much more to education than just what the eye can read.

James Michener once said, “ If you reject the food, ignore the customs, fear the religion and avoid the people, you might better stay home.” And he was absolutely right - it would be a shame not to extend my knowledge outside of the classroom. Hence, I make it a point to walk to the Centro when I have nothing to do, talk to people, try new foods, and travel. In the process of doing so, I’ve had the opportunity to meet some incredible people, improve my Spanish, and really learn. If I wanted to just learn from a textbook, I would have stayed in Michigan. A textbook is a textbook, no matter what country you read it in.

Jason: I love having the opportunity to interact with the people of México. In the United States, we live in a very rushed, materialistic culture - everybody seems to have no time. Here in México, there’s something wonderful about the emphasis placed on the importance of forming and maintaining human relationships. Families and friends make it a point to pass time together; in our house, they visit without any warning but are still welcomed into the home with open arms. And just more generally, the people of Mérida and of México are buena gente – they’re so nice, so caring. I’ve never felt so much warmth and have been treated so well before in the United States.

Jason: Chinese food! If you know if a good place, be sure to pass the number along. Hahaha…

YL: Is this your first time outside of the United States?

Jason: No, it’s not. We’ve come to México many times before and my family and I travel frequently to other places outside of the United States.

YL: What have you learned about your home country by living here?

Jason: Living in México, I’ve had the chance to remove myself from the United States and its daily activity for a few months; I’ve been able to analyze my own country from more of an “outsider perspective”.

Certainly living here, I’ve come to realize just how fortunate we, the people of the United States are and how we take a lot of things for granted; we have our constantly changing, state-of-the-art technology, our shiny new cars, and have the opportunity to travel a lot. I’ve also come to appreciate the American educational system a lot more and my own University of Michigan community; we are so fortunate to have the resources we do, which make a wide breadth of knowledge and opportunities available to us students. Sometimes you don’t really know what you’ve got until it’s gone.

Living here, I also believe that the United States operates on a fast-paced, “colder” culture, where some of the most basic morals and values are simply overlooked. And I’ve only come to make these observations by way of comparison to what I see here.

YL: What have you learned about Mexico and the Mexican people?

Jason: The Mexican people are good people. They are morally righteous, kind people with a clear conscious for some of the most basic, most important necessities in life. Every time I interact with someone, there’s just an overwhelming sense of warmth that I feel. They have treated me so well and for this, I am eternally grateful.

About México: more generally, I’ve learned a lot about Mexican society and how it operates (through government, economic, and social-class structures). Particularly in my Mexican Anthropology class, we’ve explored the complexity of the Mexican society, as well as instances of discrimination and culture adaptations.

And certainly from my own travels, I’ve observed that México is as diverse as it is beautiful; there are stories to be told of Mexico from every corner of this land - from the top of a Mayan pyramid to the middle of the jungle, from the bus stop in the Centro to the stones and shells of the beaches.

YL: How is your Spanish? Is it improving since you've been here?

Jason: My Spanish is improving on a day-by-day basis. I’m a Spanish major at the University of Michigan and while I do take Spanish classes on a regular basis, nothing compares to being immersed in a Spanish-speaking country. I’ve picked up on a lot of mistakes that I used to make in my classes and I’ve also been able to expand my vocabulary. And when I get back home, I’ll surely be able to speak to my father in Spanish at a much more advanced level.

YL: Is the language barrier a problem for you in your day-to-day life?

Jason: Not really; sometimes the language barrier presents small problems - sometimes I don’t understand colloquial words or slang terms, because I never learned them in school. But I feel like I came to México with a fairly advanced level of Spanish (after studying the language and practicing with my father) and so I’ve been able to live here with relatively no problems. Thinking in Spanish also really helps a lot, which is something that I should strive to do on a more daily basis.

YL: What is the one most important piece of advice you would give someone planning a move to the Yucatán?

YL: After your semester here, do you have any plans to return? Why would or wouldn't you?

Jason: I don’t have any immediate plans to return; although I’d love to if the opportunity presents itself. I’d love to come back and visit my family here and see some of the places that I don’t think I’ll have the time to visit. I’ve spent a long time here in Mérida and I have many wonderful memories; I feel very comfortable here. At the same time, I think that it’s important to see other parts of the world and other parts of México. This semester has been a great learning opportunity for possible future trips…

Jason: Certainly I think my future will be different than a lot of Yucatecos who are of my age; I think a lot of that has to do with the different economic conditions of both countries. For starters, I haven’t found many Yucatecos that have traveled outside of México—the opportunity that I’ve had to live outside of my own country has totally changed my perception of people and my outlook on life. And these are changes that I hope will enrich my future.

I also realize now just how fortunate I am in terms of general resources - technological, medical, economic, and education resources - which hopefully will provide a pathway for a successful and challenging future.

And of course, our futures our guided by our own cultures - our own traditions, religions, customs, and languages - which will make the differences between us inevitable.

Jason: As my semester here in México has come to an end, I’d just like to thank the other American students at the UADY as well, for making my experience such a memorable one. Not only have I had the opportunity to befriend many Mexicans, but I’ve been fortunate enough to meet other amazing American students as well—many of whom arrived from their own distinct American cultures, from all parts of the country. They’ve come with a clear interest in learning about México and improving their own Spanish skills and they’ve taken it upon themselves to realize these goals in their own unique ways. And in doing so, the students—my friends—have been able to bring their own outlooks and personalities to the classrooms of the UADY and well beyond into the streets of Mérida, and for this I feel so lucky. I will always remember some of the long, late-night conversations we’ve had—on the beaches of Chabihau, on the road to Chiapas, on the way to school… Muchas, muchas gracias to those that have helped shape my experience here and my life…

You can read much more about Jason's experiences and impressions of Yucatan by visiting his blog at http://mblog.lib.umich.edu/jlsumich_mexico/. 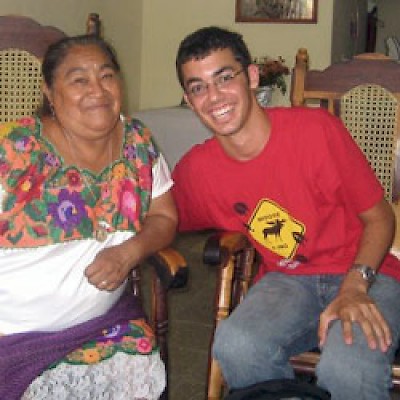