Jason: At the tender age of 27, having moved from city to city since my graduation from college, I decided once again to quit another job in North Carolina and head to Mexico. The only problem being that I didn’t have any money. So I emailed schools all over Mexico asking if anyone would be willing to trade room/board/and classes for some graphic design work.

After about 2 weeks of no luck, I finally received an email from the director of a Spanish School in a town I had never heard of: Merida. After I reached an agreement with the school I soon realized I had another problem. I couldn’t afford the plane fare. So I researched all the possible ways to relocate to the Yucatan and found my only chance would be to hitch a ride down from NC. Luckily, the husband of the school’s director was driving from Dallas to Yucatan in a week, so I booked a (much cheaper) flight to Dallas and met Miguel.

I had never been to Mexico and never spoke Spanish. So upon entry into the country I was quite nervous. I figured the entire country would look kind of like the movies I had seen. You know, the chicken in the front yard. Dilapidated houses with paint peeling off. The old man sitting on the porch staring into the distance.

I also had my full Patagonia adventure gear outfit from a previous life in Europe, back when Mom and Dad paid for my clothes. But they were getting kind of tight.

After risking life and death a few times on the highway, we finally arrived in Yucatan and I was placed with a local family. Communications were very basic as I couldn’t speak with them. But, out of necessity I ended up learning really quickly.

I befriended two Swiss guys who were also studying at the school and living with other host families. We would spend most days studying and then go out on the town to enjoy the Merida night life.

As my time at the school was coming to an end, I started to realize that unlike most cities I had lived in, for the first time I didn’t want to leave. Of course I had no money and no work, so options were limited and it looked like I would have to leave and come back to the states.

On one of the last nights that I was going to be in Merida, I went to a club called Amarantos with some of the other students. After a few hours there I noticed a girl sitting on the other end of the room staring at me. I figured I had a booger or maybe my pina colada mustache. But wiping my face I realized she was just looking because she liked the goods. Now I’m not sure if it was the combination of rum or the lighting… or possibly the Alejandro Sans blasting at a deafening volume, but I did something I have never done in my life. I approached this Mexican mystery mujer.

As I approached the table, I strained to try and put together a sentence in Spanish. I don’t even remember what I said, but I do remember that the "response" came back in perfect English. And I believe she said something about leaving her alone or she wasn’t interested in gringos. Anyway… that’s my wife Martha.

So, as they say… I think… love makes all things possible. Somehow I managed to stay and managed to get a date with this girl. I ended up living a very frugal lifestyle, renting a room in a house. I brought my computer down and took a leap of faith by spending a large percentage of the money I had on an internet connection.

Slowly things have changed and I have now been here almost 5 years. My business started slowly but has slowly grown and I now work as creative director for a large design firm in Atlanta. And yes, they let me work from here. I finally moved out of the guest room and now live in a house that I designed. I never dreamed that things would turn out this way and people always asked me how, at 32, I found myself living in Mexico.

Jason: I didn’t plan to move here… It was just a stop on my way to move back to Los Angeles.

Jason: When I first left my job, a lot of people told me I was nuts to come to Mexico when I should be trying to get a good job and have some stability. I guess they just figured I was trying to escape from something. Possibly escape from myself if I can be so bold. But sometimes your life has turns that seem almost like they’re from a book. The life I have now is so completely different from what I could have imagined when I was back in the U.S. Primarily because I have changed a lot, and my priorities are different. So everything in your life, I think, starts to align to a different set of standards. In Mexico I have realized more than ever the importance of family and how dangerous it is to define yourself by your career. I have a new definition of success and it's as if the person I was before I came here wasn’t even me. So in terms of what I intended… I never intended to change, but it just happens.

Jason: After my wife and I got married we started to design our dream home… not thinking that we would be able to build it… At least not in the foreseeable future. But as my work picked up and the stars aligned it actually looked as if it was going to be possible. We had a number of ups and downs, but we designed every square meter of our house and have been very happy. It's in a drastically different style than most houses here, mainly because the kitchen, living room, TV area, and dining room are all in the same large area. Kind of a loft. The traditional design for Merida usually puts the kitchen as a service area where someone can come in and cook.

Jason: I love the way of life here. To be honest, I wouldn’t know how I would go about doing a lot of the things that I do here back in the U.S. I’m used to things being more relaxed. There is more of a street code in Mexico that you have to learn rather than something you can read in a guidebook. You have to know how to talk to people. What are the norms, and what is offensive or awkward.

Jason: I will be perfectly honest, I like being different. At 6’4 I tower over most people here. I am a big guy and people look at me when I walk through the mall. I speak like a 5 year old. Back in my home town I always just felt like I was a number. That’s how I feel when I get back into the U.S. There are a bunch of me’s walking around. Same cargo pants, same polo shirt, same tevas.

Jason: I love working from home and spending time with my wife. She makes me laugh. To be honest, I would be happy anywhere with my girl.

Jason: Ok, I won’t lie and say something cool. I miss Twizzlers. Oh! How I miss them. I have my mom mail them to me now and again.

Jason: I have been a graphic designer since the fall of communism. I work with clients in the U.S. via the internet.

Jason: Actually, I didn’t work too hard in the U.S. either… probably because I enjoy what I do. I would consider myself lazy, however other people say I work hard… so I’m a little confused. Anyway… I’ll say no… same habits. Final response.

Jason: I saw a big group of tourists yesterday. I can tell you…they haven’t a clue.

Jason: I think its fantabulous. But of course when I try to join in on a Spanish conversation I usually get a blank stare from everyone…a pause…and then they continue. Usually it's because I’m making a remark about a topic was being discussed a few minutes ago. So in my mind it goes something like this…

- Juan: I find the philosophy of Descartes to be intriguing.

- Daniel: I concur, and the theory of reality versus illusion

- Me: Yep, I like pizza with pepperoni, not mushroom

Jason: It used to be impossible to do anything. I would get nervous anytime I had to open my mouth… to speak. And that’s really the only way to learn, to sound like an idiot. But most Meridians go out of their way to make you feel OK about not speaking the language.

Jason: It's not for everyone and it's not like living in the U.S. One of the biggest shocks I had was the lack of central A/C and the high cost of electricity. So we only use the A/C at night, even when it is 90 degrees outside. You just get used to being hot and sweaty.

Jason: I doubt it.

Jason: Never gave it much thought. I’m not sure they would want me.

Jason: Mexican culture as a whole is extremely pleasant. People that I meet are often a little put off that I’m so direct and blunt, as it's not something that is considered very polite.

Jason: One could spend their whole life studying Mexico. It is a riddle, mixed between a puzzle, between an enigma, wrapped in a sort of plastic…you know what I mean. I think Mexico has come leaps and bounds in the last 10 years and I don’t see any reason why that it would stop growing. But there are still many many problems the country needs to solve. But I’m not an expert on Mexico.

Jason: Well, we’re planning on having children very soon… so you can imagine.

Jason: I’ve actually been turning down a lot of work. I put a higher price on peace of mind than making the big bucks. 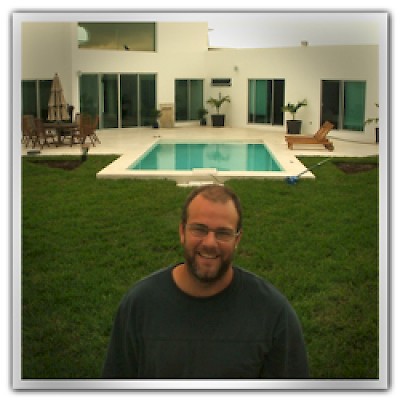