Coming Home To Merida For the First Time

Editor's Note: Obviously, it has been a very long time since we first came to Merida. We see the city now through very different eyes, of course, but we like to remember the way we felt when we first discovered Merida and the Yucatan. In that spirit, we bring you this lovely article by guest writer Paul Rappoport, who also contributed the photography.

In many ways cities are like people. Each has its own unique personality and style. New York is “The City That Never Sleeps”, Philadelphia, “The City of Brotherly Love”, and San Francisco, “The City by The Bay”. These nominal endearments stimulate the imagination and fill one’s mind with vivid images and expectations. Before you reach your destination you already know what you’ll find there. But here I was, about to arrive in Merida for the first time and had no clue about its “personality”. All I had was Spanish One under my belt.

First impressions are powerful and everlasting. The brief late-at-night taxi ride that began at the ADO bus station and dropped us at a house owned by Georgia Charuhas, (our airbnb host)-- where my wife and I would spend the next two weeks—boosted our spirits. The driver gave us great service and a sense of humor to boot. Although we were exhausted from our trek, thanks to a few laughs and reassurances en route we were feeling pretty upbeat.

Call it fate, meant to be, or just plain luck, Georgia instantly awakened us to the beauty that was to be found all over Merida. She welcomed us with a midnight snack and a brief tour of her abode. Her house, filled with exquisite art, became our home away from home. Georgia, an expatriate artist and former dress-designer (her dresses were sold at Bonwit Teller) from Chicago via Greece and “parts unknown”, set up shop in Merida back in the 1960’s and has been painting up a storm ever since. Her latest extravaganza? She will participating in a show of her “Alice in Wonderland” pencil drawings, scheduled for July 2016 at the Museo de la Secretaria de Hacienda y Credito Publico in Mexico City, showcases the “magical realism” in her work.

We had come to Merida looking for some new energy. There’s only so much sun and sand a body can take and a resort-centered vacation held little appeal. But an extremely safe and walkable city like Merida, affording an array of cuisines, culture, shops, history, architecture, street vendors and musicians, and ready access to the beach, biosphere, and Mayan ruins, heralded not only an adventure-in-waiting but also a chance to feel like we could belong.

We noticed the lack of eye contact and absence of greetings from others on the street and were initially put off by it. Only later did we come to realize that the Mayan and Mexican locals, non-intrusive by nature, were respecting our privacy and theirs and showing respect. Once introduced or engaged, however, you will not find a warmer or more welcoming people. And helpful! Whenever lost or befuddled there was always someone there extending themselves to get us back on track.

We spent an evening at the Orquestra Sinfonica de Yucatan, visited the Museum Peon Contreras, meandered in and out of art galleries, and treated ourselves to several marquesitas, that traditional tasty Yucatecan morsel sold by street vendors. Refusing to choose between queso (cheese) or Nutella on my crusty wafer, I opted for a combo despite the dubious glances from my wife—until she tasted it!

I was beginning to get a taste for the personality of this city. Every day allows for another dimension. Because the lifestyle of Merida is mainly outdoors, activity occurs in the streets, church squares and plazas where people mill, eat, dance, socialize, shop and interact. The diversity of events constantly evolves. One night we attended traditional folk dancing in the Plaza Grande, another listening to the music of the Serenadas Yucatecas in the Plaza Santa Lucia, and a Saturday afternoon whiling away the hours absorbing the resounding baritones of the didgeridoo player in the Parque de la Maternidad. Didgeridoo? Indigenous Australian music in Merida? Absolutely!

The People of Merida

On the way to the Paseo de Montejo we came across Fausto’s unusually garnished garage door. Fausto, an energetic, soccer-loving, rock ‘n’ roll enthusiast, explained that just because it is a garage door does not mean it should not be spruced-up a tad. So he let his creative imagination run, bringing some color and novelty to the neighborhood.

Continuing on our journey to the Trattoria la Pasta for lunch, we once again found ourselves diverted by conversation. We met Kreso Cavlovic, an expatriate artist from Toronto who invited us into his studio for a beverage and some respite from the heat. Represented by the Soho gallery in Merida, Cavlovic works in a number of motifs, including what he describes as a “contemporary figurative style”. “I fell in love with Merida”, Kreso says, “because of its culture and beautiful people.” He describes the community as “accommodating…friendly…and accepting of all different cultures.” We departed Kreso’s late for lunch, but eventually made it to our homemade pasta and sauce, delighted by the spontaneous encounters, and nodding affirmation to each other that there was something special afoot here in Merida.

Heading to the Gulf of Mexico

Taking a break from city life, we headed to Progreso where Georgia Charuhas once ran her horse along the beach. The crowds were thin this particular day but the vendors and shops plentiful. We lounged on the beach under an umbrella and indulged ourselves with a lavish lunch in this lazy port town—a nice diversion for a moment, but we really had Celestun on our minds.

So that’s where we headed the next day. Celestun, a fishing village on the Gulf of Mexico, and home to natural wetlands and the Celestun Biosphere Reserve, places you right at the mouth of the estuaries. We took an exhilarating boat ride through the mouth of the river, into the mangroves, and gingerly circumnavigated the flocks of flamingos, a squadron of pelicans, and an assortment of herons, sea turtles, and other wildlife. The beautiful expansive beach, with frigate birds flying in formation overhead, provided a superb spot for a fresh seafood lunch. All of this is just an hour’s drive from Merida, but a world apart.

Of course no trip to Merida can be complete without at least a cursory if not an extensive exploration of the nearby Mayan archaeological zones. Our first visit to these historical and spiritual sites moved us in unimaginable ways. The archaeological marvels of the pyramids and the imaginings conjured up in one’s mind amidst the presence of this once remarkable civilization left us forever altered. We immediately knew, when time allowed, a return visit was a must.

Upon our return to Merida we headed directly to the Santiago colonia for dinner, mouths watering for our favorite Yucatecan specialty at La Reina Itzalana: Sopa de Lima. Once sated, we called it a day, preparing to leave within hours for our return to the United States.

You can not come to Merida and sit still, unless of course you choose to. The city boasts both a bustle of activity as well as niches for reverie and serenity in its many parks, churches, and hideaways. And yet it reminded me of the days of childhood when you were afraid to stay home for fear of missing something.

Merida derives its personality not solely from its myriad points of interest, but also from the diverse and fascinating people who populate it—those with roots here, others who have moved here, and all those just passing through. And then there’s the contagion. When you find a place where people love to live, they tend to welcome you to share their joy, and in so doing make you feel at home. It’s a city that enchants, inspires, and loves you back.

“How was Merida?” I was asked upon my return to Philadelphia. I heard myself reply, “It felt less like a trip and more like a homecoming. It’s a gem of a city”. That thought resonated for a moment. I thought to myself, with its many facets and allures, perhaps it would be fair then to recognize Merida as the “Diamond of the Yucatan”. Of course, Merida is known as "The White City", but if it is begging for a new moniker, "Diamond of the Yucatan" seems to fit.

Here we are, months later and the memories continue to glisten.

This article was written by a guest author, Paul Rappoport, who lives in Philadelphia, USA. Additional photographs taken by Paul can be found at the link below. 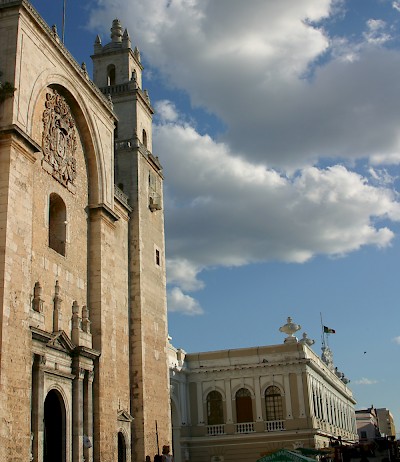 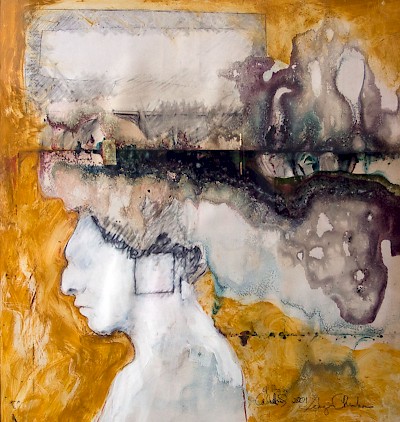 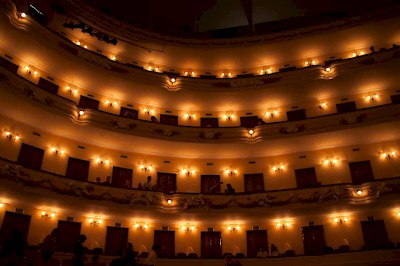 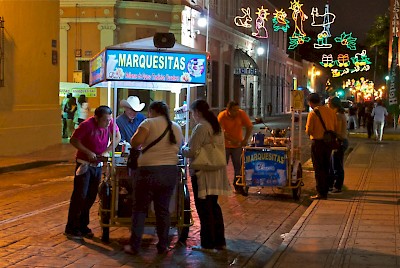 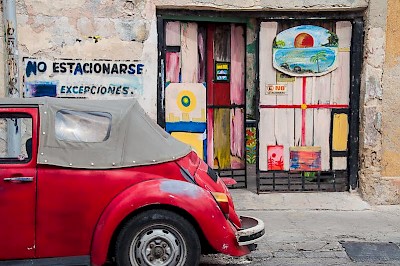 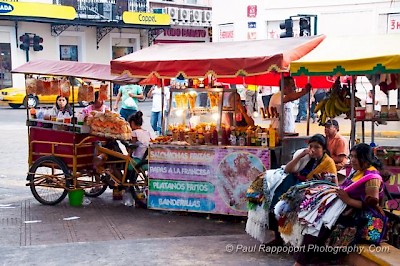 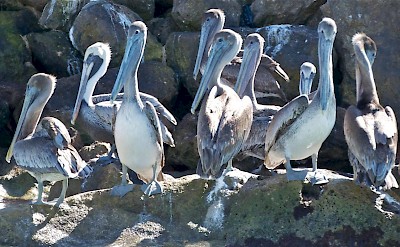 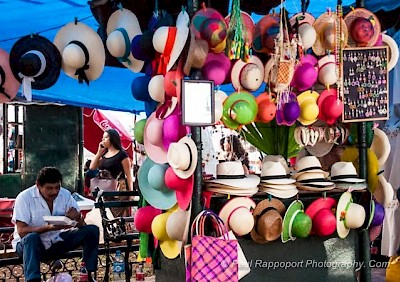