We at Yucatan Living have been supporters of Casa Catherwood and the good work that the owner, Louis Nevaer, has been doing there to create cultural experiences and learning opportunities for the residents of Merida and especially the expatriate community.

So it is with profound sadness that we must end our support.

For the past several months, Louis has been campaigning to destroy an AIDS charity based in Texas that provides information and services to residents of Merida and Yucatan State. The charity is called Brazos Abiertos, which means "Open Arms" in Spanish. To accomplish his inexplicable goal, Louis Nevaer has been using every tactic available to him, with the exception of the legal process, but especially the Internet. He has often used aliases to post negative comments on websites or to send emails to his mailing list that hide his identity.

As many of our readers may know, Yucatan Living is published by the "Working Gringos", known here in Merida by their real names, James and Ellen Fields. What many of our readers may not know, is that Yucatan Living is not how we make our living. We operate an Internet development and marketing company called Eclectec SA de CV. Eclectec has been in operation for over 8 years, designing, maintaining and marketing websites for over 100 clients around the world. Eclectec has been the "webmaster" for the Brazos Abiertos website since its inception.

Louis Nevaer, the owner of Casa Catherwood, publishes at least three websites: Casa Catherwood, Merida Bed & Breakfast Association and the Mesoamérica Foundation. Today, he posted an article, which he has since removed, and which was also sent to a long mailing list. The article quotes Working Gringo, aka James Fields, and makes claims that he, as the owner of the Brazos Abiertos hosting company, refused to shut down or modify their hosting service after a "concerned resident" determined that content on their website was defamatory and libelous of Mexico and Yucatan.

In fact, the "concerned resident" was Louis Nevaer himself. What's more, Eclectec is not a hosting company and has no legal authority to shut down or modify a client's website upon request by a "concerned resident". Imagine how many websites would go dark if anyone who didn't agree with the content could have it shut down simply by contacting the webmaster. Also, Louis continued to email Eclectec many times, often using insulting language. After enduring his harrasement, James responded last May to clarify Eclectec's position:

Our Internet development company, Eclectec SA de CV, is not a hosting company. We purchase hosting from a third party in the United States, and develop and maintain the software that runs on the hosting company’s servers. If you really believe in your case, then submit a complaint or file an injunction. The hosting company is ICDSoft.com.

In other words, Louis Nevaer knew, four months ago, that we were not the hosting company for Brazos Abiertos.

Louis Nevaer's other claim, that James' use of the word "distortion" proves that we or Brazos Abiertos knowingly lies to cheat donors, is itself a distortion. As marketing people will tell you, all communication is a form of manipulation, and marketing usually distorts through emphasis. How many hotel websites will tell you about the occasional cockroach you may find in your room? Instead, they emphasize the things you will like about their hotel. No charity or aid group is going to tell you not to donate because some of the needy are doing fine. It was in this context that the word "distort" was used in our email exchange.

Louis also removed the last line of the quote:

Brazos Abiertos distorts the facts by adding some of their own, based on the personal experiences of urban gays living in a conservative, Catholic society. Perhaps the rhetoric is not to your liking, but many aid organizations use similar language to motivate potential donors. Their claims do not explicitly denounce or take away from other efforts by government and non-government organizations.

Why did Louis remove the last line of the quote from his article? To change the emphasis, of course. One could call it distortion, or marketing, but in this case, Louis Navaer's article, like his emails to us and others and his posts on various websites, is harrassment. It is a form of bullying and intimidation that we don't really understand, but we can no longer endure nor condone.

What They Collect is for HIV/AIDS Patients

The board member and John Francis Truax along with Carlos Cabrera May, all partners of Fundacion BAI, talked about the public complaints made recently by foreign residents Luis Nevaer and Gerardo Martinez about the alleged fraud being committed by this non-profit organization.

According to Navaer and Martinez, Brazos Abiertos – aka Fundacion BAI – is not registered as a civil association at Secretaría de Hacienda y Crédito Público (Mexico's federal tax authority), received works of art and donations, and did not deliver tax-deductible receipts. Also, the $3.2 million pesos collected in Merida were transferred to a bank account in the USA.

Solis Pacheco, who is also a lawyer, provided the Diario with copies of the last three tax statements of 2008, 2009 and 2010 (which were declared to the SAT, which is the Mexican tax collector), property title from the Ayuntamiento de Merida (Merida’s city hall) where Fundacion BAI appears as the owner of the building, and the articles of incorporation validated by notary Raul Pino Navarrete.

Solis Pacheco also provided copies of a California criminal court law suit, where it is stated that Louis E. Varela Nevaer (real name of Luis Nevaer) was sued for defamation and falsehood by Trenton H. Norris.

He also informed that Fundacion BAI has sued Louis Varela for the defamation and libel Varela has performed by sending emails to USA and Merida residents. Soon there will be legal action also against Venezuelan resident Gerardo Martinez for defaming the organization using a blog.

“We don’t take any money. All that is collected is used on behalf of HIV/AIDS patients”, he said.

Doctor Cabrera May indicated they work closely with the State’s Health Department and provide regular activity reports to Dr. David Gaber Osorno, general director of the State’s HIV/AIDS/STD Prevention Program, who is well aware of the work they do.

They provide prevention workshops, perform HIV tests and distribute condoms among the youth.

In 2009, Fundacion BAI performed 1,400 HIV tests and reported six HIV positive patients, in 2007 and 2008 there were a total of 15,800 condoms distributed and 24 workshops were performed in schools like COBAY and several communities.

They showed a box with a fresh delivery of 500 HIV tests and plenty of condoms to continue their education campaign and HIV prevention in Yucatan.

As for the money, Cabrera May assured it is handled in a bank account in a local branch of HSBC.

“We don’t know why they just don’t like us”, said Solis Pacheco.

Louis Navaer continues to live and work in our community. In fact, he just published a new book about Merida (Merida, the Essential Guide 2014) that is available on Amazon. In it, he continues to defame or denegrate people and organizations he does not like, and promote those he does.

Louis Navaer has a history of this type of activity in the United States. All the documented cases against him are a matter of public record; anyone can consult them via the County of San Francisco, Superior Court of California.

Many of us have supported causes through Casa Catherwood, Navaer's business in Merida. Most of us have learned the truth about him by becoming his targets or by knowing people who were his targets. But there are many new people coming to Merida every day.

We do not ask you to take our word for anything. But investigate the evidence (above) and in this additional article for yourself and then decide whether or not you want to support this man. 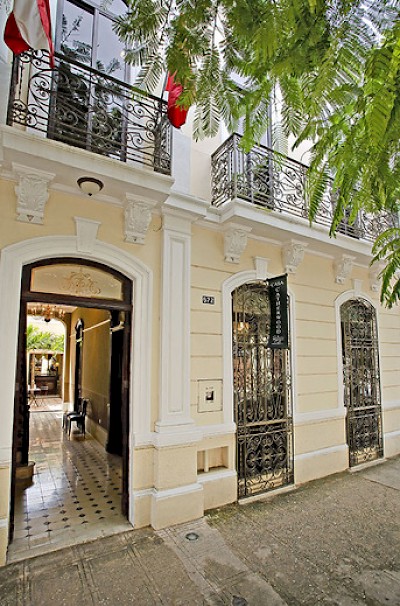