Sunshine is one thing that the Yucatan Peninsula has in abundance... maybe even over abundance at times. No matter how much it rains, the sun always comes out soon enough. If you move to Yucatan from a place that had less sun, you start out by reveling in so much sunshine... but soon enough, you come to value the shade almost as much. THAT is how much sunshine there is here.

Merida used to be known as a city full of windmills. In addition to the ever-abundant sunshine, there is enough constant wind that at the turn of the 20th Century, before ubiquitous electricity, Merida's wells were pumped by power from windmills, called veladas. Some of them can still be seen in the Merida skyline.

Now, when people think of alternative sunshine, however, they are thinking of solar power. Perhaps because the devices for capturing the sun are less invasive, smaller and more efficient. Solar panels and solar power systems have been improving with each passing year, not only becoming more efficient but also becoming more affordable. And gradually, more and more expatriates (and Yucatecans) who own their own homes (and pay their own CFE bills!) are turning to solar energy to power their homes and offset some of their costs. Because as a resident of Yucatan, often the single highest household bills (if you use air conditioning) becomes your CFE bill.

We asked some local home owners who had installed solar panels to answer some questions and share their experience of installing solar power in their homes. Here are answers to a survey that we sent to some residents who agreed to talk to us about their experiences:

Where do you live? Most of the people who answered our inquiries about installing solar power live on the Yucatan Gulf Coast, in and around Progreso. One respondent lived in Cholul and two houses were in downtown Merida.

Please describe your house: Most of the houses are independent homes, two to three bedrooms. Two of the respondents have villas in a gated community in Progreso. All the homes have air conditioners, and most have pools, though no one described their pool as large.

Why did you decide to install solar panels? Everyone cited the high cost of electricity in the Yucatan.

"... our neighbors told us they (installed solar panels) and without them, the CFE bill would be close to $700 USD in the summer. It was a no-brainer to take advantage of the panels."

"We decided to install the solar system because of the high cost of electricity here. We moved here from Hawaii, where electricity was the most expensive in the USA, and we were sick of it."

But some also cited environmental reasons...

"I think the sun is one of the natural resources in Mexico. I am an advocate for green anything and feel strongly that solar needs to be used whenever possible. Also, I wanted to use my AC and have reasonable electrical bills."

"I originally wanted the panels to lower my bills... since the panels have been installed, an unexpected transition has occurred. I am more conscious and conscientious about the energy I consume. I don't know if it's because I actually started paying attention to my usage by reading the CFE meter daily, or I have accepted the responsibility of environmental stewardship because of the panels."

What did you have installed?

"10 panels, supplying 2420 W or watts of power." (A villa in a gated community. Single family, 2 story condo with 2 bedrooms, 2 baths, 3 air conditioners and a small private pool with a filtration system that they run 2 hours per day.)

"10 panels on the roof (which we use as shade for a sitting area on our roof)." (2 bedrooms, 2.5 bathrooms and a washer/dryer. Air conditioners in each room and a small pool.)

What did it cost to install? Most people were very pleased that the costs of installation were very close to the estimates that they received.

Did you install the solar panels in the process of building or did you add them on later?

"I lived in the house for four years before installing the panels. The entire process was painless. The actual install took only three days, including the concrete bases for the frames, mounting the panels and installing and hooking up the inverter. It took CFE three weeks to install the special meter, and would have taken longer if EcoCentro (our vendor) had not contacted them daily to prod them along."

"We installed them in the process of building our home. We hardly knew the installation was going on. There were no modifications needed as we had already put a tube in for the wires to go into the garage to the converter. You can't even see the panels."

"The installation was one of the most effortless that we have done since living here. It was done quickly, on time and professionally. There were no expensive modifications needed."

"Due to space restrictions, we had to have a steel structure built on our roof for the panels. The cost for that was minimal compared to the rest of the installation."

"The process seemed very easy. We added the panels on after the house was built, and no modification needed to be made to the house."

How long have you had your solar panels now?
The answer to this ranged from one month to two years. With the costs falling as they have, (25% from 2012 to 2014, according to our contacts at EcoCentro), we imagine there will be more people with experience in this area in the months and years to come.

Have the savings been what you expected?

Have there been maintenance issues and what have they been?

"It is important to keep the panels clean to maintain optimum output, so I plan on cleaning them every couple of months. It is important to know that you should never clean them when they are hot, so you have to do it early in the morning or late in the evening, or on a cloudy day. Also, you do not use any cleaning agents... just water and a soft brush or cloth."

"Little maintenance. My helper went up on the roof once (in six months) and just dusted the panels off."

"No maintenance issues yet (after two years). We will have the top of the panels cleaned as part of a regular maintenance this year."

"I was told I could go longer, but found I needed to clean the panels sooner than expected."

"The only thing we need to do is clean the panels, but I have noticed that even if the panels are dirty, it doesn't make much difference to the electricity generation. In the summer months, the rain cleans the panels for me."

"There have been absolutely no maintenance issues. Once in awhile we check to see if the panels need cleaning, but rarely do they need anything more than washing off with a hose." (after two years)

Everyone we talked to (six or seven households) seemed to be happy with their solar panel installations. For some, it has only been a few months since they installed them. Others have had them for years. All in all, viable solar power installations are a relatively new thing in Merida and the Yucatan Peninsula, but the concept is catching on as providers become more capable, CFE warms up to the idea and the costs continue to fall.

Do you have questions about solar installations in Merida? Do you have experience with installing solar panels in your home in the Yucatan? Do you know of dependable vendors or places to buy supplies? We'd love to hear from you. Feel free to add your experiences in the Comment section below... for the benefit of all our readers, for the good of the Yucatan, for the good of the planet.

****
Special thanks to EcoCentro in Merida who was kind enough to provide us with contacts and additional information. 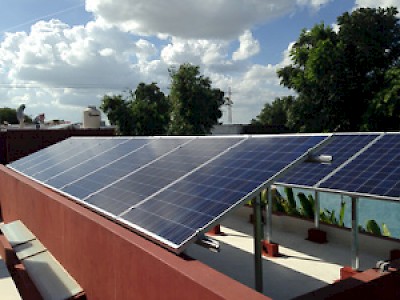 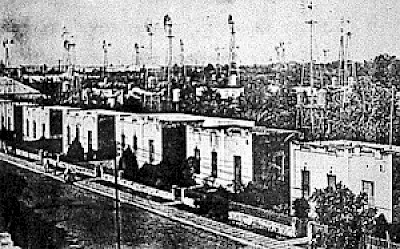