On April 30th of this year, the Instituto Nacional de Migracion, the government entity that provides immigration services to us expats living in Mexico, changed the process of applying for and renewing visas and put it all online.  I went into the offices of INM on May 4th to ask about renewing my FM3 for this year and was handed a piece of paper. The paper told to me go to www.inami.gob.mx, look under Tramites and register for renewal “online”.  Oo-o-okaaay!

At home, on my computer, printer at the ready, I followed the instructions.  There was a video, in English, that described what each of the several levels of being a visitor in Mexico are named and how one is covered under each section.  That was the extent of the English at this government website at the time.  And although I have had over 10 years of experience in trudging through the various levels of bureaucracy in this country, I wilted when faced with figuring out this new approach to FM3 renewal.  And so I took myself to YES (Yucatan Expatriate Services), to seek assistance.

Betty Quijano, one of the able-bodied project managers working there to help people like me, and Paulina, her assistant, were interested in learning about this new process with an actual case study. They were immediately helpful, taking care of everything right down to getting the correct name (and correct spelling) of the Regional Director to put on the letter (Solicitud de tramite) that must be included with a request for renewal.  They sent me off with the Formato Migratorio para Tramites de Estancia printed off of the INM site with everything filled in correctly and its own pieza (file number).  Betty offered any follow up I might need with further requests from INM.  If everything was not clear to me through this process, I was to call the office and they would supply assistance.

They also printed off a page which told what requisitos were needed with the application for renewal, all of which I had in hand when I went to the office:

In this new way of doing things, copies of your active bank account statement are not needed.  You have to surrender your old FM3 booklet, as you will be issued a new laminated card that will be your new identification. You must show a comprabante de pago de derechos (the ever-useful CFE bill will do) and you just show it, copy not needed.

I took all these pieces back to INM early one Thursday morning, sat with an agent while she checked everything and did some data entry.  Then I was given a form to take to the bank and pay for this renewal service.  Now that was a step I recognized from past years, at least!  (You should make sure you do the payment at this point in the process, rather than leaving it until later.)

As soon as I returned to the INM with the receipt from the bank, I was given another piece of paper which gave me the website  address to track my visa and to let me know when I could return to the INM office to pick it up.  I was to return when directed, with five photos in the infantile size.  All this was spelled out on a slip of paper which I was able to show to the photographer.  Wal-Mart is one place with the facility to do these photos in Merida (and probably other places in Mexico), which made it easy for me.

After approximately 5 days of waiting, and checking the INM website each day, a message of Notifiacion en ventanilla appeared.  I called Betty and ask her if she thought this meant that the documents were ready.  That’s what it meant, all right!  I printed off this page to take with me to the INM offices, as I find it helps to have something with you to show where you are in the process.  There was a little waiting around at INM (there seemed to be a high volume of supplicants that day), and I was given my new visa, which is a card, with photo and thumbprint, that I now can carry in my wallet and have with me at all times.

I must admit to being impressed. We have truly arrived in the 21st Century with INM.  All in all, it took about two weeks to complete the entire process, and I wasn’t pushing it.

Yes,  I could have stumbled around in this initially unfamiliar territory and got the renewal accomplished, but I was proud of myself for circumventing unnecessary anguish by working with YES to get me started.  Next year, I will undoubtedly be able to do this on my own.  If I can’t, I will have no hesitation about calling Betty for some assistance.

Editor's Note: This process has changed yet again since late 2010 when this article was written. It is best to check with a local service or an immigration attorney to determine the best course of obtaining your Mexican visa. 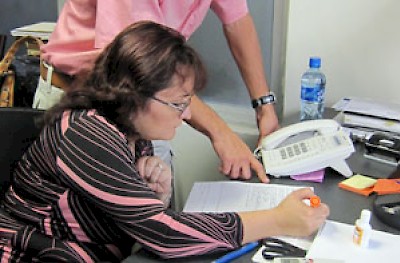