IMPORTANT: Since we first wrote this article, waaaaay back in 2006, the process of obtaining permission to live in Mexico, either temporarily or permanently, has changed many times. We leave this article here as a historical one... this is the way it used to be, updated to be correct in 2010. Some of the information, such as the situation in the border zone, the ability to stay in Mexico six months with a tourist visa and the location of the immigration offices in Merida are still true. Other things, like the names of the visas (they are no longer called FM3 or FM2), the requirements for residency and the procedures, are no longer the same... and can almost be counted upon to change annually. Also, many of the comments to this article contain very valuable information, like the comment about apostilles. For the actual detailed and current facts on immigration requirements and procedures in Mexico, we encourage you to find a service that specializes in helping expatriates become residents in Mexico, and follow their advice!

Well, it’s that time of year again. Time to renew the residence visa, called an FM3 No Inmigrante Visitante by the Mexican Government.

You may have heard all kinds of horror stories: long lines in the hot sun and longer waits in chilly, air conditioned rooms packed with total strangers who do not speak your language, an endless list of invasive questions about your family, medical history and possible criminal past, body searches for distinguishing scars and tattoos, notarized copies of nearly every legal document you own, and countless small humiliations at the hands of insensitive bureaucrats whose only interest seems to be intimidating you until you give up and go back to where you came from!

But all those stories are about foreigners trying to live in the United States. The process in Mexico is much easier and humane. Mexico actually encourages immigration and has been doing so for many years. Over the past few years here in Merida, the process has been streamlined and computerized. Once you know what is required, you can expect a relatively simple and painless experience.

Depending on the special conditions of your residence visa, you may legally do several things that Mexican citizens do but tourists can’t:

First, some background on Mexican visas: People entering Mexico by car at the northern border with the United States may do so without any type of visa if they remain within roughly 20 miles of the border. This is the so-called Border Zone established under NAFTA.

Beyond this area, on every major southern route into Mexico, there are checkpoints where you must apply for a tourist visa, called an FMT. The last time we checked, these cost less than $18 USD. You will need a passport or birth certificate to obtain one. If you are flying into Mexico, most airlines issue an FMT automatically. The FMT visa allows you to travel freely around Mexico until it expires, which is usually 30 days, but this period can be extended up to 180 days. When you receive your FMT, fill it out. An immigration official will scribble on it and stamp it with his or her sello (official seal). It’s all very simple and routine. The official will keep the larger part of the form, and give you the smaller part. Don't lose it! You will need to give it to another immigration official as you leave the country. Or if you want to extend your stay, you will need that little slip of paper.

If you want to live full-time in Mexico and legally do the things listed above, then you need to apply for a residence visa. There are several types, but the FM2 and FM3 are the most common.

Most people who obtain an FM2 or FM3 visa for the first time generally go to the Mexican consulate in their own country or use an intermediary in Mexico, such as an immigration lawyer or advocate. This is mainly due to the language and cultural barriers. The folks down at the immigration office in Merida speak some English and are willing to help you through the confusion. The services of a lawyer can cost upwards of several hundred dollars above and beyond the cost of the visa. So it’s possible to do it on your own or to hire a third-party to help out. It’s a very personal decision.

When we first moved to Yucatan, we hired a lawyer and accountant to set up a Mexican corporation, so naturally we worked through them to obtain Working Gringo’s visa. The total cost of this business start-up was less than $2,500 USD. To operate your own business in Mexico, you must obtain an FM3 that names you as the Administrador Unico (Chief Administrator) or other principle of the company named in the Constitucion (essentially, the articles of incorporation).

Another way to work in Mexico under an FM3 is to locate an employer who will write a carta (letter) explaining why you are uniquely qualified to hold the position and why a Mexican national isn’t available to do the job. English language teachers, people with specialized technical skills, and relatives of a business owner usually qualify, but be aware that Mexico protects its job market on behalf of Mexicans. They prefer that foreigners come to Mexico and start businesses to create jobs, not take away existing ones.

Most people obtain an FM3 simply to live in Mexico full time and have a bank account here. These folks are commonly called rentistas. The main qualification is the ability to show income from a foreign source of at least $1,000 USD per month. This income can be in any form, including a bank statement with an account holding $12,000 USD, representing one year of income.

Yet another way to obtain an FM3 is to be married to somebody who already has one. To prove it, you will need a special notarized version of your marriage certificate, called an apostille. This document can be obtained for a small fee from whoever is in charge of your state’s or provence’s public records.

Where to Go in Merida for Immigration Services

So what’s the procedure for getting your visa? Take a look at the lovely colonial building shown here. That’s the new offices of the Instituto Nacional de Migration (National Immigration Institute) in Merida, which was moved last year from their crowded little office downtown. It is located on the corner of Avenida Colon and Calle 8 in the “old money” neighborhood called Colonia Garcia Gineres. To get there, take a taxi and tell the cabby where you want to go. Or, if you have your own wheels, drive north from Colonia Centro on Calle 64 until you merge into Reforma. Take the next left at the Plaza de Toros (Bullfighting Ring) and drive down to Calle 10 and turn right. Drive two more blocks to Avenida Colon and turn right again. Continue to Calle 8, turn right and park. The offices are behind you, across the street. They open their doors at 9:00 AM, and we suggest you try to be first in line.

You will probably make four visits to this office to obtain or renew your visa. During each visit, you will stop at the security desk outside the front door and sign in to receive a visitor’s badge. As you enter the building, you will see a reception desk in front of you and a nondescript brown door to the left. Tell the receptionist what you are trying to accomplish and she will hand you a small yellow or pink ficha (card) with a number on it and direct you to the brown door. Inside are two rooms with booths, desks and chairs. The booths in the first room are for yellow activities and the desks in the second room are for pink activities. The number on your ficha tells you where you are in the waiting queue. Sit in one of the chairs until your number is called.

STEP ONE: Document Requirements. Whether you are trying to obtain a visa for the first time or requesting a prorroga (renewal), the first step is always to ask for a list of required documents, called Requisitos Para Tramites Migratorios (Requirements for the Migration Process). The attendant will present you with a typed list of the many possible required documents, and check off those that apply to your situation. At a minimum, you will be required to present the following documents when you return for your next visit:

Depending on your situation, you may be asked to bring other documents, such as your company’s constitucion, an apostille or your last Mexican tax payment. Always bring the originals along with the number of copies requested, just in case there’s a question of authenticity.

You may be tempted to skip this step and just bring all your documents on the first visit, but the fact is the official list of requirements seems to change from year to year and the items they may check off in your case may be different each time you renew your visa. Since this step usually takes less than 15 minutes, there’s really no reason to blow it off.

STEP TWO: Document Delivery. After your papers are copied and double-checked, take them all to the immigration office, receive a ficha from the receptionist and wait in the pink room until your number comes up. If you arrived early, the wait will probably only be a few minutes. The attendant will look over your documents, compare them to originals and type information about you into a computer. You may be asked a few clarifying questions. If you have satisfied the document scavenger hunt, you will be given a Solicitud de Tramite Migratorio (Request for Migration Process). Don’t lose this piece of paper or you may have to start the process over again. You will be told when to return for the next step, which is usually about a week later.

STEP THREE: Fee Payment. Upon your return to the office, one of two things will happen. Either you checked out with the authorities OR there are more questions and documents to produce. Assuming that you are a decent and honest sort, chances are everything went smoothly.

If this is your first visa, now is when they take receipt of your photos and personal references. You will sit down with a gentleman in a back room who will ask you penetrating questions like, “where were you born?” and “how tall are you in centimeters?” as he fills out the personal information that goes in your visa. He will then paste your photos into some immigration forms and tell you to come back in five business days after you have paid the fees.

In order to pay your fees, they will give you three copies of the Declaracion General de Pago de Derechos (General Declaration of Rights Payment), which you take to any bank. This year, the fee was $1,686 pesos. At the bank, sign all three forms and hand over the money. They will stamp all three forms and give you back two.

STEP FOUR: Receipt of Visa. Return to the office with your original Solicitud and the two copies of the Pago de Derechos and they’ll hand you a little green book with your picture in it that says: “Hey, you’re practically a Mexican!” 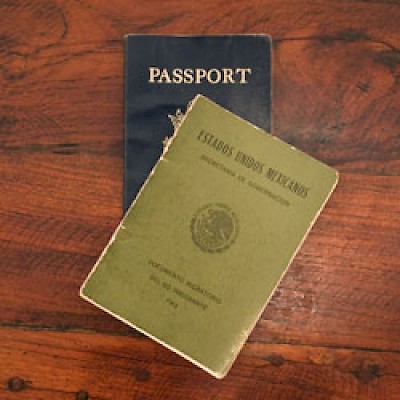 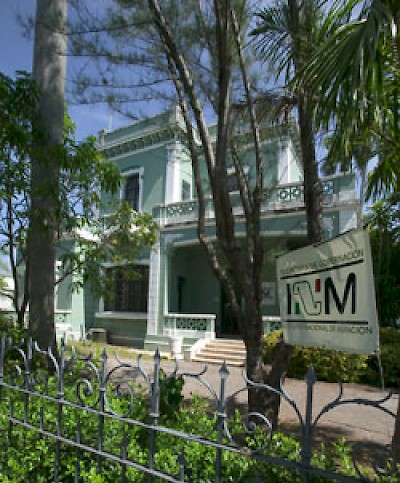