Banking in the Yucatan

The experience of banking in Mexico is nothing if not frustrating. And yet, it has improved SO much over the few years since we moved here.

Most banks in Mexico are now really international banks, not Mexican banks. HSBC is here, as is Citibank (disguised as Banamex), Scotiabank (Canadian bank), Santander and Bancomer (Spanish banks). The largest Mexican-owned banks are Banorte and Inbursa. But though many are international in ownership, they still operate in Mexico, according to Mexican customs and preconceptions.

We have personal experience of only three of these banks, and we stress that it is our *personal* experience. Your mileage may vary.

One of the first things we learned about banking in Mexico is that not everyone does it. People don't just naturally trust banks here and banks certainly don't have a lot of trust in their customers either. Mexico has a much larger cash economy than the United States. More transactions are done in cash, and a lot more people here do not have bank accounts of any kind. Partly this is because many people, especially indigenous people like the Mayans, participate minimally in the cash economy, often growing much of their own food and bartering for services amongst themselves.

And the trust issue? Well, consider that Mexico experienced a national revolution less than 70 years ago, and a major peso devaluation about 10 years ago, when anyone who had money in the bank saw their net worth cut to 10%. Mexican banking, and money in general, is fraught with a history that we as Americans can only begin to comprehend.

Let's suppose you DO have a bank account in Mexico. You'll probably have a savings or checking account that holds pesos. It's good to know that you can also have a dollar account at some of these banks. We happen to have one at Banamex. That means that if someone pays us a check in dollars, we can deposit it into that account without paying conversion fees. Of course, the check has to be from Mexico. We can also deposit (or withdraw) cash dollars to this account without fees. So it comes in handy, since we are Americans and still deal in dollars on occasion.

If we need to deposit a check in US dollars from outside Mexico, that is another story entirely and takes a lot longer. We used to get frustrated by this, until we realized that we probably wouldn't be able to cash or deposit a peso check in an American bank no matter how long we waited. So we're over that.

Here are some other useful things we have learned when banking in Mexico:

-It really helps to get to know the manager. They say this is a good idea in the States, but in Mexico it can make all the difference if you have a problem. If they have seen you and dealt with you in the past, then a degree of trust is cultivated and everything goes more smoothly. This applies generally to doing any business in Latin America. Personal relationships are very important.

-Very few people in Mexican banks speak English. If your Spanish is minimal, expect to bring a translator with you the first few times if you are trying to accomplish something complicated. The Spanish of banking is a specialized idiom.

-Never go to the bank (if you can help it) around the 1st or 15th of the month. These are the days, called quincenas, when most people are paid and go to deposit or cash their checks at the bank. If you go, you will wait a very long time.

-Don't try to do anything at the bank after noon. You might be able to accomplish something, but we've had so many experiences where a particular thing doesn't happen after 1 or 2 pm or the person you need is at lunch, so its just not worth it. Conversely, don't expect to talk to a manager before 10 am either. The best banking hour is 11 am.

-If you are going to need more than, say, 100,000 pesos in cash, let the bank know a few days ahead of time. And if you buy property here, you might need that much and more. We once had to provide the sellers of a $50,000 USD property with CASH for the closing. That's a lot of pesos... and they wanted it all in cash. Why? Like we said, a lot of Mexicans do not trust banks. What we wonder is: where do they keep all their money? Most Mayans sleep in hammocks, so they don't have mattresses...

-When you sign up for your checking account at the bank, pay close attention to how you sign your name (su firma). You will be required to sign your name that way EXACTLY from then on, or your checks will be returned. Checks will also be returned if you scratch anything out (forget putting your initials next to your mistake), if you spell anything incorrectly or if you forget any part of the exactly correct way to spell out the amount of the check. We've had checks in the states cashed or deposited without a signature (!) and we've had checks returned here because we didn't sign our name the "right" way. We've even had a check returned because we wrote the wrong deposit account number on the back, scratched it out and put the correct account number on the check. Nope. Something fishy there. They would not deposit that check.

-Are you running out of checks? To get a new checkbook, you have to personally show up at the bank with your identification in hand and sign for the checkbook. No one else can pick it up for you.

-Do you want to cash in some dollars for pesos? Bring only your most pristine bills. Banks in Mexico will not accept a dollar bill (or any other kind of bill) that has writing, stamps, holes, tears or anything else unusual about it.

-You can pay your telephone, electrical and water bills at the bank, but only if you pay before the due date. (You can also pay those bills at many of the grocery stores and pharmacies in town).

-Getting a credit card in Mexico is like pulling teeth. Debit cards are fairly easy to get, but credit cards are a different story. We finally got a credit card for our business account from Banamex, but since we have to actually transfer money into the credit card account (which we can do on the Internet) before we can use the card, it is more like a debit card. We still have not cracked the code on getting a real honest-to-goodness credit card here. Just as well, of course. But interesting that it is so difficult here and so easy in the United States.

-In Mexico, you don't write a check to "Cash". You write it to "Al Portador", which is NOT a guy named "Al". It means "to the bearer". The check must be cashed at the bank from which it comes, not at your own bank. So if the check says "Banamex" on it, you have to cash it at a Banamex bank. The Al Portador check is a very common practice here and much preferable to carrying around a lot of cash, though that doesn't stop people who insist on being paid in cash, especially if it's a large sum, because banks limit the amount you can write these checks for.

-Change or cambio is a very valuable thing to have and you're going to need it when shopping at the local mercado or buying handicrafts. Most Mayans and others who do not fully participate in the money economy do not take checks or credit cards (duh!) but they also do not usually have large bills and only a minimal amount of change. We try to always keep a healthy amount of coins in the car and in our wallets/purses for those occasions. If you are going to a bank to get money, try to get some of it in smaller bills (20 pesos bills are the smallest).

Lines at banks can be very long, even on a normal day. At our Banamex branch, the lines are often so long that you must take a number from a dispenser just inside the entrance, and then sit in one of the chairs provided for waiting. We once had to sit through 120 numbers before ours was called.

Unlike four years ago when we first arrived in Mexico, the banks here have developed functional internet sites. The Inbursa website that we use is a much better design and much more user-friendly than the Banamex website. However we only need to remember one userid and one password for Banamex. For Inbursa, we have to remember FOUR passwords or claves (keys). Once inside the website, however, the Inbursa website makes interbank transfers and paying some of your utility bills quite easy. We have not tried the interbank transfer on the Banamex website, but the utility bill payment for CFE (electrical bill) and Telmex does not seem to work.

Banking has gotten a lot easier in the four years we have been here. Partially that is due to bank improvements and the fact that the Mexican economy is improving and joining the 21st Century. But mostly, we think, it is because we have begun to learn the ropes. 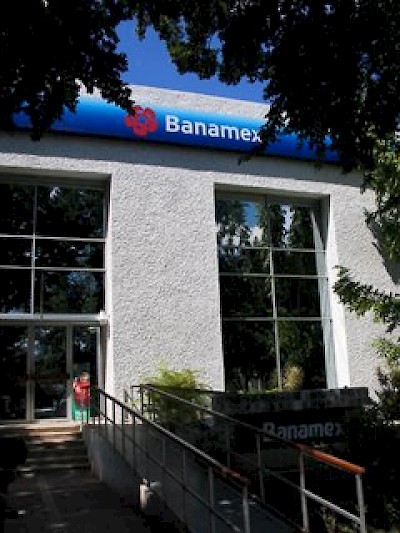