If you are just catching up, you can read Part I and Part II here

During the examination of the Balankanché cavern, one of the Maya workers mentioned to archaeolgist William "Willy" Folan that a Maya shaman or h-men from the nearby village of X’Kalakoop wanted to see the cave. Folan drove over and brought the h-men, Romualdo Ho’il, to Balankanché to meet with Andrews.

According to Fernando Barbachano Gomez Rul, whose family owned the Mayaland Hotel and the Hacienda Chichén, Maya in the region had known for generations that hidden somewhere was the home of the rain god. Once the residents of X’Kalakoop learned that the hidden cavern had been discovered, they knew what it was and were afraid that it was now defiled and would bring disaster down upon the Maya, such as drought or too much rain or damaging hail.

Ho’il explained in his native tongue that he and his men needed to perform rituals in the cave, now that it had been opened, “to protect those who have violated these sacred precincts,” referring to all who had been in cave since its discovery. One of the big no-nos had been that the cave had been defiled by a woman, Gene Stuart, the wife of archaeologist George Stuart.

“It is necessary to do something so that nothing bad will happen to them," Ho'il said. "The Yum Balames who are in the cave are displeased, and they must be pacified.”

The Maya wanted to perform a ritual called tsikul t’an ti’ yuntsiloob (“Reverent Message to the Lords”) “to pray that there will be no danger for those who have penetrated these sacred places without permission of the gods,” Ho’il said.

For Barbachano, the arrival of the Maya changed his life.

“One old man got close to me and said, ‘Little Fernando, you may not recall me, but I was one of your teachers at Chichén.’”

Barbachano was perplexed because he did not remember any Maya teachers during his childhood growing up at the family's Mayaland Hotel. He only remembered a Yucatecan woman that his mother had hired to tutor him, but no men. The Maya continued.

“I’m going to ask you something because I’ve never asked you for anything. I want you to give us permission to enter the cave of Balankanché and perform a ritual.”

“I have no power to do that,” Barbachano replied.

“Yes you do. You can talk to the governor and the governor can give permission, so you can do it. So I will be back tomorrow at the same hour and I want an answer.”

And in a rush, the memories all came back to him -- the hours he had spent in the presence of the Maya workers at Chichén Itzá. Barbachano said he suddenly understood then he had been “indoctrinated into the Maya culture and the Maya religion by priests who worked as gardeners at the Hotel Mayaland.”

As Barbachano tells the story, remembering those events of more than fifty years ago, his eyes moisten, his voice shakes.

“At that time--the-whole--memory came to my mind. At that moment I knew I had a mission. It was a very shocking moment and it is every time I recall the incident because I am living it at this moment. It brings very strong emotions.”

With Barbachano's help, the Maya received permission to perform their ceremony, but there was a catch -- the Maya had to agree to let the ritual be recorded. At first they balked, according to Barbachano, telling officials,

“We are not movie stars. We are not playing a game. This is our religion and this is nothing to going to the public.”

Eventually Ho’il relented, and announced that he would return on October 17 to perform the ceremony, which would be conducted over more than twenty-four hours in the cave. He calculated he needed 532 pesos for food and other supplies required by the ritual, including one large tom turkey, thirteen chickens, thirteen black candles, as well as incense, corn, leaf tobacco, honey, spices and two bottles of aguardiente or liquor. Rather than risk further provoking the yum balames or the local Maya, Andrews gave Ho’il 250 pesos and promised the rest once the ritual was completed.

At daybreak on the appointed day, Ho’il and his attendants arrived and began the day by brewing up a batch of balché, a sweet, honey-based mead flavored with the bark of the tree for which the concoction is named. Usually balché is fermented, but as there wasn’t time they spiked the bowl with aguardiente.

To the archaeologists who had been working inside Balankanché, the idea of spending twenty-four continuous hours inside the cave to perform a ceremony was somewhat disconcerting. There was the humidity.

“Thick cardboard boxes brought in during the morning would be useless by afternoon for taking out specimens,” Andrews wrote. “Even with [fewer] than fifteen men in the large inner chambers, the oxygen became exhausted in an eight-hour day, leaving the workers panting, after a minimum of exertion, as if they were atop a tall mountain peak.”

To conduct the ceremony, there would be more than double the number of people inside the cave at one time, and there would need to be burning of candles and possibly incense, all of which would consume available oxygen.

But on the appointed day at 8 a.m., the archaeologists joined Ho’il and thirteen assistants (including several boys) to spend more than a full day underground. Andrews and two members of his Dzibilchaltun team, Folan and Stuart, joined Mexican investigators Dr. Barrera Vásquez, Raúl Pavón Abreu, and Victor Segovia to witness the ceremony. Segovia (with Stuart’s assistance) operated a tape recorder during the ceremony.

Over the course of twenty-nine hours, h’men Ho’il officiated more than twenty-seven rituals, which included sacrificing several chickens and one turkey, consuming sacred foods made of maize and honey, and drinking a lot of balche. A few hours into the ceremonies, Barbachano showed up, and by special dispensation of Ho’il, he joined the ceremony. Several hours later, Ho’il, possibly overcome by all the balche he had to drink, digressed from the ritual to eulogize Fernando “as a protector of the community,” even though Barbachano was very much alive and present in the cave.

The rituals continued until 2:30 in the morning, at which time Ho’il declared that they had done all they could to placate the angry gods. All the food, drink, and accoutrements required for the ceremony were packed away, save for thirteen candles that were left lighted on a makeshift altar in the main cavern. The h’menes ordered the cave sealed, and instructed everyone to return two days hence.

The night before everyone was to return to Balankanché, the gods made themselves heard, unleashing torrential rains on Yucatan. On October 20 at 7:45 in the morning, everyone gathered again at the mouth of the cave. Ho’il recited a brief prayer, and then led everyone into the bowels of Balankanché. At the altar they found four candles still burning. Like the number thirteen, four is a sacred number to the Maya. Ho’il declared this positive omen.

But even more wondrous was the candles had remain lit even though it had been raining in the throne room. Water, percolating through earth, now sprinkled from the hundreds of mini-stalactites that pitted the ceiling of the cave over the makeshift altar. The sacred cave, formerly defiled, had now been spiritually cleansed.

The Balankanché Cave (alternatively Gruta de Balankanché or Balamcanché) is three kilometers east of Chichén Itzá on Highway 180 (between Ik Kil cenote and the village of X'Calakoop).

Admission in 2015 was $115 pesos, not including a tip for the guide (who is required as you cannot explore the cave on your own).

However, visitors to the site are infrequent, so you can talk the attendant on site to do a tour in whatever language your party speaks. The one and only time I visited the cave, the guide began in English, but his command was not the best, so we had him switch to Spanish. 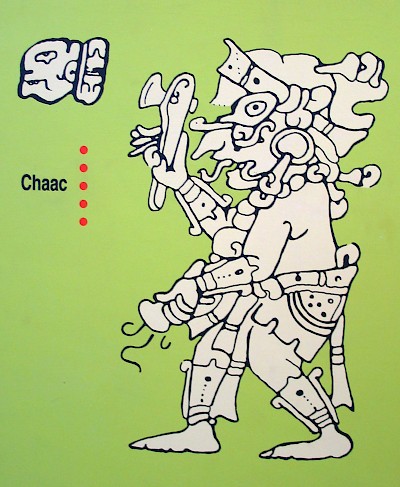 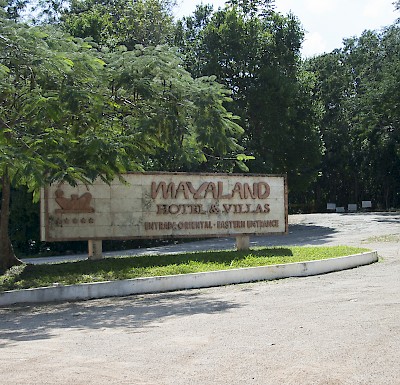 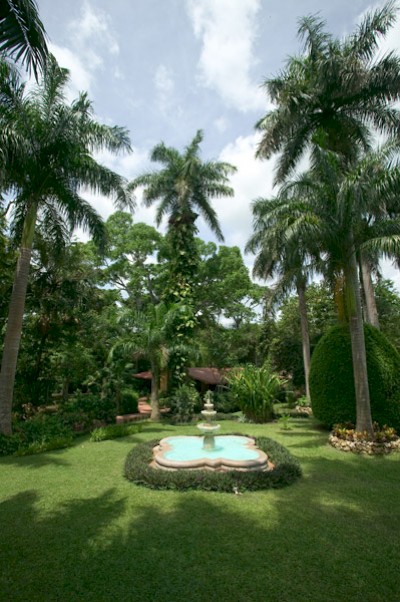 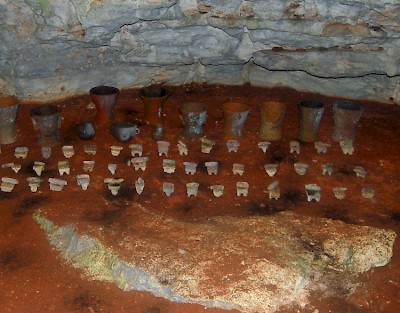 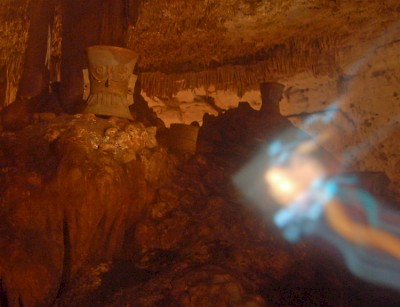 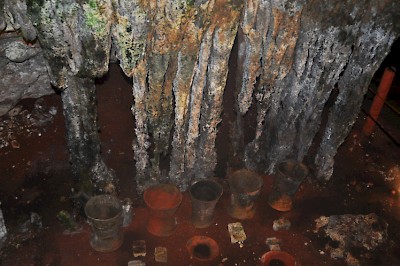 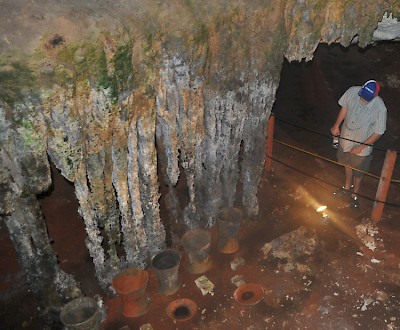 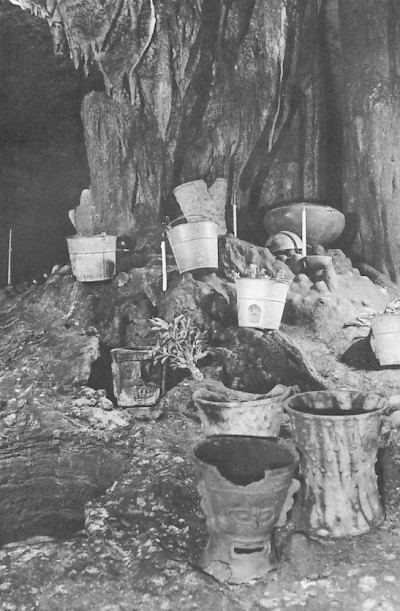 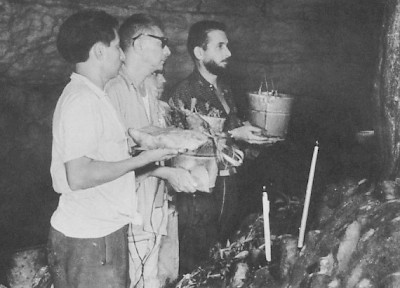 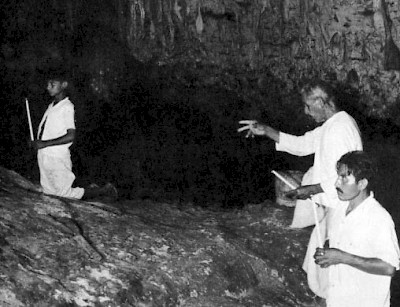 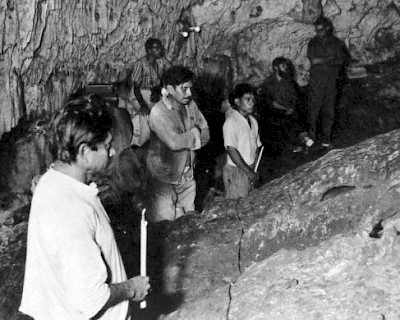 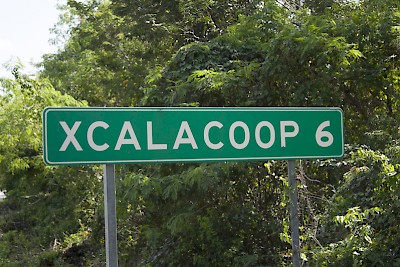