Here is the history of how a little known regatta that started in New Orleans put the first feet on the sand on the Yucatan Peninsula and helped to create Cancun.

In a Sports Illustrated article on the third running of the Regata al Sol in 1967, Ellington White, recounted the description he was given for the destination of his first regatta across the Gulf of Mexico. "It's a small island off the tip of Mexico, near Cozumel. In the territory of Quintana Roo. Beautiful place. Untouched. Wonderful beaches. No telephone. Great fishing."

For sailors, the value is in the journey and the destination is simply lagniappe (According to Wikipedia, "a small gift given to a customer by a merchant at the time of a purchase"). There are of course exceptions to this rule. As the Sports Illustrated writer learned, Isla Mujeres was and still is definitely an exception. A six-mile long tropical island off the coast of Cancun, Mexico, Isla Mujeres is still a rustic and charming oasis far removed from the bustle of the mainland. Spend a few days on Isla Mujeres and you'll be awash in topless Europeans sunning on sugar sand beaches dotted with coconuts dropped from palm trees swaying in the tropical breeze. The island and her pristine waters also happen to be the finish location these days for two major bluewater regattas that originate on the Gulf Coast. These two regattas can claim all or partial credit for sparking the growth, if not creating, the Mayan Riviera... a process that started nearly 50 years ago.

In 1965, the eastern coast of the Yucatan Peninsula was a wholly undeveloped stretch of coconut plantations. The nearest airport and population center was a four hour drive on dirt roads to Merida, where Pan Am Airlines arrived via three flights a week from Mexico City. The only inkling of a resort was the island of Cozumel, some 40 miles due south of what would one day be Cancun. At the time, Cozumel had only ten hotels, and only a few with air conditioning. Isla Mujeres only had one hotel at the time, and that hotel boasted salt water showers and no air conditioning. There was no Cancun.

Used To Be Havana

For sailors on the Gulf Coast, the exotic port of call and race destination was always Havana. After Castro came to power in 1959 and Cuba was declared off limits for US sailors, Havana ceased to be an option for many years. Without a desired destination, sailors and regattas retracted and major international point-to-point races across the Gulf of Mexico to the Caribbean all but ceased.

Seeing an opportunity, the Ambassador-at-Large for Mexico, Señor Alberto Alvarez Morphy, traveled with the President of Mexico and a trade delegation of tourism and business officials to New Orleans in 1965. Ambassador Alvarez Morphy was a dapper man who wore Savile Row suits and spoke with a British accent which belied his half Irish lineage and English education. The ambassador was the driving force behind the creation of regattas from Southern California to Acapulco and understood how something as simple as a sailboat race could and did generate tourism and word of mouth throughout America.

When the Mexican delegation arrived in the city, the Mayor of New Orleans held a formal reception at Gallier Hall to honor and welcome them. Many prominent New Orleanians were invited to the affair and those present were asked to pair up with the visiting officials and become their hosts and tour guides when they were away from official events.

Richard Spangenberg, a member of the New Orleans International Business Committee, and his wife were present and made sure that they were paired up with the elegant Señor Morphy. Señor Morphy carried with him several rolled-up posters under his arm the entire evening. After being introduced, Morphy unrolled one of the posters, completely oblivious to Spangenberg's ties to sailing and the Southern Yacht Club of New Orleans.

According to Spangenberg, "To my surprise and dismay, the posters Alberto carried proclaimed the Regata al Sol Yacht Race from New Orleans to Isla Mujeres, Mexico." With unabashed, yet good-natured Mexican bravado, the posters not only declared that the 555 nautical mile regatta was to be co-sponsored by the Southern Yacht Club, but they also advertised that the race was to take place only three months later in June of that year. This was the first anyone in New Orleans had heard of the regatta, a sport where normal preparations for a boat, including securing a crew, for a distance race of this sort could take from six months to nearly a year.

As the evening wore on, Spangenberg agreed to approach the leadership of Southern Yacht Club with the proposal. Within a week, the blessing from the club was given to him to pursue the race as long as he would engineer the entire affair and that the club would not put up any money. Even that agreement had been difficult to secure.

Spangenberg started planning earnestly, but a month before the start there were a total of zero entrants. Meanwhile, on Isla Mujeres, major festivities were in the planning stages to welcome the impending American "fleet" and trophies were donated by "Chrysler and GM of Mexico, as well as a host of others." The Mexican media also bit hard and the regatta became the premiere news event on the very rural and undeveloped Yucatan Peninsula.

Faced with an amazing regatta sans boats, Spangenberg scrambled and leaned on the Mexican government to lean on the US Ambassador to lean on the US Navy to outfit two of their nearly mothballed and leaky Luders 44' yawls located in Pensacola, FL and get them ready to compete. The Navy agreed after some arm twisting, and even allowed one of the boats to be rechristened the Isla Mujeres. The boat eventually sailed with a group of non-sailing Mexican dignitaries as added crew.

After the start of the two-boat regatta on New Orleans' Lake Pontchartrain, Spangenberg flew down to Mexico City and caught one of the three Pan Am flights to Merida. By this time, he was fully invested in the success of this event. Upon arrival in Merida, he endured a four-hour cab ride to the desolate shores of what would one day become Cancun and caught the very small ferry to Isla Mujeres. He eventually ended up in a borrowed rowboat, which he used to paddle out into the bay in order to anchor two homemade buoys to mark the finish line for the two Navy boats. During the race, both of the Navy's Luders were constantly pumping themselves free of water while sailing south into the teeth of the 4+ knots of the Gulfstream under light winds. It was not much of a race!

The second Regata al Sol in 1966 had 16 competitors, but attendance quickly dropped off for the third annual race. By the fourth incarnation of the regatta in 1968, there were only seven entrants. It seems that the sailors were finding it disagreeable to sail in the light winds of the Gulf during the summer, while contending with the 4+ knot current pouring due north from the straits between Cuba and the Yucatan Peninsula. Saltwater showers and no air conditioning at the island's only hotel, after nearly a week of saltwater baths in the radiating heat of the Gulf of Mexico during the summer, were also seen as a negative.

Cozumel, an island about 40 miles due south of Isla Mujeres, was a bit more developed. After 1968, a delegation from Southern Yacht Club, led by Spangenberg, motored down from Isla Mujeres in a Bertram 32 to explore Cozumel's facilities. While there were more modern accommodations, the island lacked a harbor. Finding it impossible to get past this one glaring shortcoming for a regatta, the Cozumel officials promised a harbor by the next summer. Spangenberg was skeptical, but he returned in December to view the progress of the construction and was pleasantly surprised to discover an entire harbor being jackhammered and dredged from what was a shallow and coral-filled inland pond. The next summer, the Regata al Sol landed in Cozumel and stayed for the next eight years.

Having lost the growing annual regatta to Cozumel and having watched the tourist dollars flow into that island as word spread along the Gulf Coast, a few prominent officials from Isla Mujeres continued to push for development of the Mexican Yucatan coast, at first to little or no avail. Finally in 1970, faced with developers wary of investing in an unproven stretch of sand, the Mexican Government agreed to finance the construction of ten hotels in what was soon to be called Cancun.

As construction was nearing completion on the fledgling infrastructure of Cancun, the regatta to Cozumel was dealing with falling participation. Sailors were balking at the extra sailing time going against the major current plowing between Cuba and the Yucatan Peninsula, as well as a maze of marshes they had to sail from the start in New Orleans to the Gulf of Mexico. Faced with this, the regatta committee moved the dates up to May, taking advantage of more favorable winds. They also made the event biennial, departing instead from Gulfport, Mississippi and eventually from Pensacola, Florida. With the infrastructure increasing in Cancun, the regatta returned to Isla Mujeres.

Today, the Regata al Sol (sponsored by the Southern, Pensacola and Isla Mujeres Yacht Clubs) and the Regata al Sol del Sol (sponsored by the St. Petersburg and Isla Mujeres Yacht Clubs) both continue to run to Isla Mujeres. The St. Petersburg version, which first ran in 1969 and remains an annual event, is 100 miles shorter and tackles less challenging currents. Because of this, this race has greater participation from cruisers. The longer, more challenging Pensacola version is populated with a good mix of true racing and cruising boats. Both events are legendary for their sailing and for the parties on the islands afterwards. These regattas are now a must-do life experience for any sailor worth his salt on the Gulf Coast.

With the cancellation of the Galveston to Vera Cruz regatta due to increasing crime issues in northern Mexico, these two Gulf Coast regattas represent the last and best of the international regattas that bisect the Gulf of Mexico. The Regata al Sol del Sol runs in April of 2014 and the Regata al Sol runs in May of 2014. If you want to participate, now is the time to begin planning. And stay tuned to Yucatan Living next spring for reports about the regattas when they happen!

*****
Author Troy Gilbert blogs at gulflatitudes.com. We look forward to more stories from him about sailing events in and around the Yucatan Peninsula.

And here are some fun photos of Cancun back in the day...

More about the two Regattas... 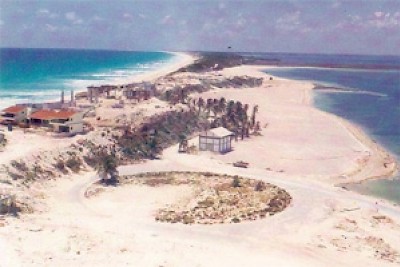 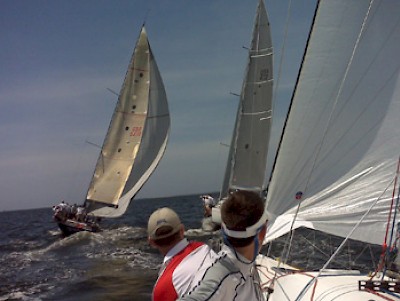 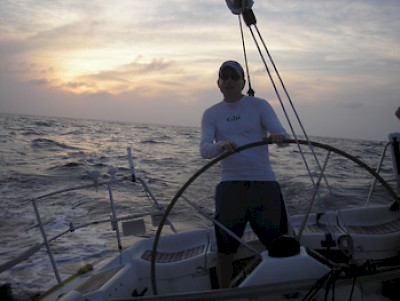