For several days, don Hermenegildo had been anxious and uneasy thinking about a conversation he had had with doña Raimunda, the wife of the licenciado don Felipe Ramos Alonzo.

They were passing the time speaking of various matters and gradually got around to the subject of the love that parents feel for their children and the joys that these bring to the domestic scene when the señora, abruptly cutting to the heart of the matter, asked her partner in the conversation:

"And you, why don't you get married, don Hermenegildo?"

The unexpected shot fired at him, as much as the missile it discharged, was for a moment unsettling to the prudish don Hermenegildo, who felt a sea of blood rush to his face.

"Señora, I don't marry because . . . it's been many years since I've thought of those things; believe me, I know what I’m talking about."

"But why don't you think of those things?", doña Raimunda put forth determinedly.

"Age! But you're still young. How many men much older than you get married every day?"

"It's true, and for that they're considered out of their minds."

"Let's get this clear, don Hermenegildo; let's get this clear. Those considered out of their minds are those who marry when they're ancient, and more so when it's with a young girl who could be their granddaughter; but you, hombre, you're capable of knocking down a wall with one punch."

"I wish, mi señora. My hair has already started to turn gray; believe me, I know what I’m talking about."

"One or two gray hairs don't mean anything; and it's easy to see that you're not old but on the contrary, ruddy and healthy-looking."

At the compliment wrapped in those last words, don Hermenegildo blushed and his voice caught in his throat. This mortified him even more and, making an effort, he observed:

"But who would you have marry poor don Hermenegildo López?"

"She who wants to have a good husband, attentive, affectionate, moderate."

Don Hermenegildo, after bowing solemnly and ceremoniously to each one of these laudatory epithets, exclaimed:

"That concept honors me exceedingly and more so coming from you; but not all women believe the same, doña Raimunda."

"But I'm guessing that you've never been in love. How do you know that others don't think the same?"

"They don't think the same, my lady, I know what I’m talking about. I was young and I also tried to get married; but God wants me to die single as I was born, and single I must die."

"And where do you get this idea? Why would God have wanted you not to marry?"

"I don't know the reason why, but in whichever of my ventures, I was very unfortunate. You laugh when I complain about my luck, but it is the truth. When I was born, my mother died. What worse could have happened to me? Nothing. But something worse did happen. Shortly after that, it seemed that I would die, too, because a wet nurse could not be found to feed me. I grew up without the pleasure of the maternal care enjoyed by all children. My father did not have many assets and he wanted to provide my sister and me with an education, so he put her in a school and I went to the Seminary after having acquired the basics in a co-educational school. I was beginning the study of Latin language and culture when my father died. And don't you want to believe that I was born under a bad star? Now if only I were a lawyer! Believe me, I know what I’m talking about."

Don Hermenegildo had forgotten the point of the conversation in order to blurt out to the señora one more time the unhappy story of his life. She, desirous of continuing their interrupted exchange or, more probably, of abandoning her guest’s lamentations, diverted him from the important telling of yet more misfortunes that had befallen him upon the death of his father, saying to him:

"But you didn’t tell me why you didn’t get around to getting married."

"Well, I was headed there, mi señora. I was saying that I am ill-fated, and it can’t be any other way. My arrival into the world was the death of my mother."

"Now you’re back to leaving me without knowing why you haven’t married."

"My bad luck, doña Raimunda. My bad luck. There has not been one woman who would love me."

"But I have gone looking for them, and they have not been interested. And not just one, but several. Believe me, I know what I’m talking about."

"Frankly, I cannot make sense of it. Who knows if they would have gotten along with you, if you had expressed yourself clearly? When it comes down to it, those are things that women hold close and share only with persons in whom they have great trust."

"Great trust, doña Raimunda! How much greater than that which you are kind enough to offer me without my deserving it? God would not forgive me if I were reserved with you."

That was where doña Raimunda wanted him and there she led him, using her skillful knack to hear what for a long time she had desired to know and don Hermenegildo had escaped revealing.

Five years earlier, her husband called upon the clerk to make some copies for him and put some papers in order. This was work that he was to perform for two hours every day, and since then he had been a frequent visitor of the señora, and he apparently continued to be as unrepentant a bachelor as he was when she met him.

Never had she heard from him a romantic memory nor had she known of anyone who had been courted by him. Aside from one or another polite gesture, not unusual for a man who prided himself on being urbane, he showed no signs of being affected when he was near a beautiful woman. So it was that with this opportunity, and when don Hermenegildo let it be known that in his youth he wanted to get married, her curiosity was increasingly piqued to know if an unhappy love affair was keeping that earlier man a confirmed bachelor. For that reason she had besieged him with any and every observation, and she now knew that, in doggedly testing the close friendship that united don Hermenegildo with the family of the señor licenciado Felipe Ramos Alonzo, the victory was hers.

And in truth, aside from the obsession he had with his pompous connections, it was doña Raimunda who heard with patience, and even with affection, the constant history of his shattered existence. Her onslaught, then, was well-aimed, and don Hermenegildo began to shake the dust from his romantic recollections buried years before in the depths of his memory. 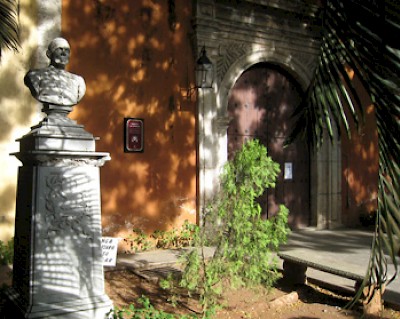 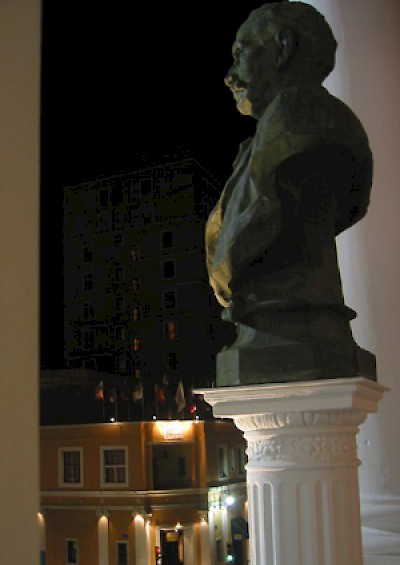