Doña Prudencia got up that morning in a bad mood. The previous afternoon a messenger from the hacienda had arrived, carrying on a mule a sack of beans and another of fruit, but also a letter that gave her the bad news that the process of scraping pulp from the henequen fibers had been suspended because the steam engine was having problems.

“I’m going to blow my top,” she said. “Sometimes it’s the fire stoker arguing with the cart boss. Other times countless cut leaves are drying out or this or that part of the machine has broken. If it isn’t that work has been interrupted because five or six workers are sick. And all of them asking for a fortune . . . . I don’t know how I’m going to do it. Some day when it’s least expected, I’m going to sell the plantation or abandon the whole place and let it go to ruin.”

The messenger, who had gone to see the machinist, returned saying that Sr. Gómez couldn’t go to the plantation until Monday (it was Wednesday) because he had many commitments for the week.

“He has to go!,” exclaimed doña Prudencia, beside herself. “He’s embarrassed to repair something that he didn’t know how to fix right fifteen days ago. They go on, doing bad work and making the problem worse and then they bill us again charging a fortune. Surely they know how to do this! But eight days later the same problem comes up again and it’s back to the same foolishness.”

“Niña,” she said, turning to her daughter who was brushing her hair in a dining room chair. “Get things together so that we can write to your brother.”

And with these words she went into the interior rooms, coming out a little later with a tin container in one hand and, holding against her chest with the other, several brown-paper wrapped packages which she fit into the can after placing it on a table. She was finishing securing the lid of the container, tying it with string, when Lupita, after finding her writing paraphernalia on a wooden pedestal table, pulled up a chair, seated herself on it, and dipping her pen in the inkwell, spoke, raising her voice so that doña Prudencia, who was now in the hall, would hear her.

While she was waiting, the mischievous girl entertained herself by drawing letters and extravagant sketches on the cover of a Manila folder, adding to the many that already littered various items on the tabletop.

Her mother finally began to dictate various recommendations regarding work on the plantation and other details, ending with: “Your mother who loves you and wants to see you”.

Doña Prudencia immediately placed some scribbles at the end of the letter believing she was writing her name, and she hadn’t even lifted the pen when she said,

This matter of the flourish was indispensable in doña Prudencia’s letters. At first, she had not included the “your mother who you know loves you and wants to see you” but, taking care to demonstrate affection for her children, it was that ubiquitous flourish that came to be her trademark.

At this, three knocks sounded on the door of the zaguán.

“Who’s there?”, the two asked at the same time.

“Me”, answered the voice from the street, as if that pronoun would be enough for them to recognize.

Lupita went to the shutter at the window.

“It’s the Ortegas”, she said to her mother with alarm.

Quickly she then slipped into the room adjacent to the parlor, as she was somewhat disheveled, in old sandals and bare feet. She immediately half-closed the doors and picked up the red-striped stockings she had tossed aside. After putting them and some pretty calfskin shoes on, she looked in the mirror, dusted powder on her face and finished braiding her beautiful hair.

Meanwhile, two young women, a little older than she, had appeared in the parlor.

“To what do we owe the pleasure of seeing you here at this hour?” said doña Prudencia, squeezing the hands they offered her and turning pleasant the sour expression on her face.

“Oh, nothing, doña Prudencia. We came to see if you would do us a favor. Where’s Lupita?”

“In her room; she’ll be here soon. And what is it that you want?”

“Well, as you know the carnaval is coming up, and Belita (Isabelita) wants to learn the lanceros and some other dances. And tonight our cousin Pancho, our brother Perico and six more friends are coming to the house so we can practice, just among friends, with two groups.”

“Yes, but the reason for our visit is to let you know that we’re counting on Lupita and we’re begging you to let her join us.”

“Nothing more than square dances. And that because the group was incomplete and they coaxed her not to leave the three couples in position unable to dance.”

At that Lupita appeared in the parlor.

The Ortega girls arose, and each one of them, stretching her neck to bring her face near, exchanged loud kisses with the recent arrival, who seated herself on the sofa.

Josefita Ortega, who was the older, said to her:

“We want to know if you’ll join us in a rehearsal at our house tonight.”
“A rehearsal,” Lupita exclaimed with delight. “I don’t know if mamá wants me to” she added, timidly lowering her head and raising her eyes in order to see the effect her observation would have on her mother.

“I’ve told them you don’t know how to dance”, doña Prudencia pointed out in order to say something.

“Well, for that very reason”, Lupita almost wheedled in reply.

“All right. If you want to, I don’t see a problem, as long as it doesn’t end too late.”

“No, doña Prudencia. You’ll have her here by 10:00 tonight”, exclaimed Belita firmly, in order to put to rest this last of the señora’s reservations.

“Who is going?”, asked the now satisfied invitee.

“Well, you, our neighbor Chona Garcia and the two of us. That’s four. And the three Palomos and Rosa Barrera, eight, for two groups.”

“And what time does it start?”

“At seven thirty, but it’s better that you come a little early.”

“Well, we’ll be waiting for you!” said Josefita, getting to her feet. “We still have to let Chonita and the Palomos know.”

And they returned to the handshakes with the señora and the kissing with Lupita, who accompanied them to the door of the zaguán, where they had another interesting chat.

In it the daughter of the house explained that she had known since the day before what was developing with the dance and that the one principally behind it was Pancho Vélez, her visitors’ cousin, although she was unaware if it had been decided who the other boys were.

“You tease!”, retorted Belita mischievously. “You want to make us believe that Luis Robles hasn’t told you that he’s one of them.”

“Oh God!”, replied Lupita bursting with pleasure at the joke. “I never speak with Luis Robles. He comes by here, but…”

“No, and they say that because of that, Fermín Dorantes is upset with him.”

“Let’s see”, interrupted Josefita. “Which one of them would you rather have go?”
“Me? Both of them.”
“But Lupe; that is so like you.”
“Why?”
“So you want both of them, right?
“But, girl, what do you want me to answer? Let both go or neither one go, it’s the same thing.”
“Right. Now you make yourself indifferent.”

And so they continued chatting, until the Ortega girls left for good. Lupita went into the parlor, and with obvious pleasure at the prospect of the rehearsal and of the favors and compliments that it promised her, she sat down at the piano and noisily set about playing a mazurka.

“Niña, let’s finish that letter”, said her mother, interrupting her when she entered a little later.

And it was finished and placed in the envelope and dispatched with the wrapped parcels, after which doña Prudencia had a look at the kitchen, gave four scoldings to the maids, locked horns with a boy because he was playing and had not finished sweeping, and going for her sewing basket, seated herself in a butaque* in the hallway to do some mending, helped by a little girl. Meanwhile, Lupita had already hurriedly given her piano lesson a bad run-through. Then she went to her room, put her sandals back on and began the operation of rolling the hair around her face into cone shapes so that the wavy hair that would have to look good that night would have been properly curled. When she was finished, she picked up a novel that she had on her dressing table, flung her body into the hammock and sent her imagination flying through the world of illusions.

Soon she mentally selected the outfit she was going to wear and the accessories she thought would have the best effect, devoting a good amount of time speculating about the probable impressions awaiting her at the dance rehearsal.

She opened the book, looked for the page she had left off on and had four chapters under her belt when she was interrupted by the announcement that lunch was on the table.

****
*small, low sling-chair made of wood and leather 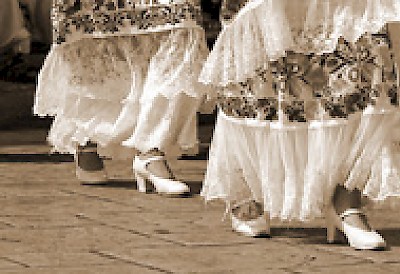 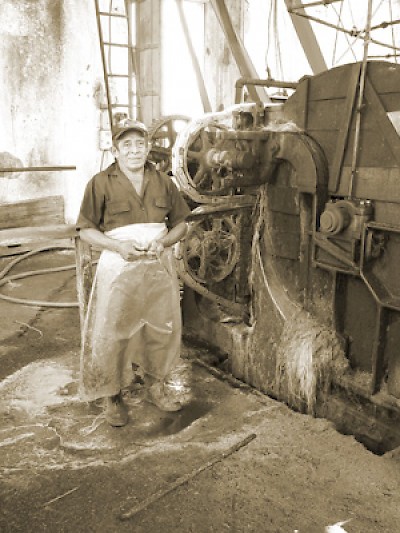 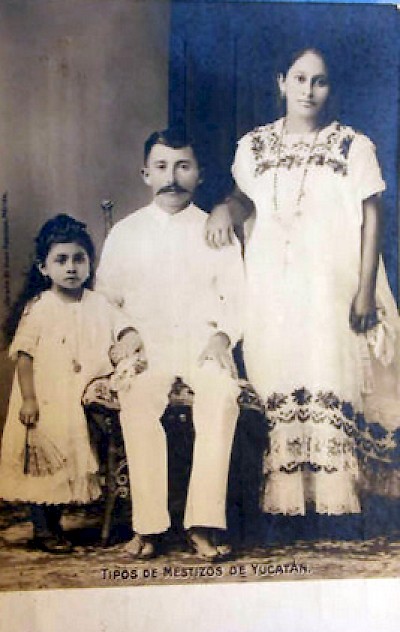 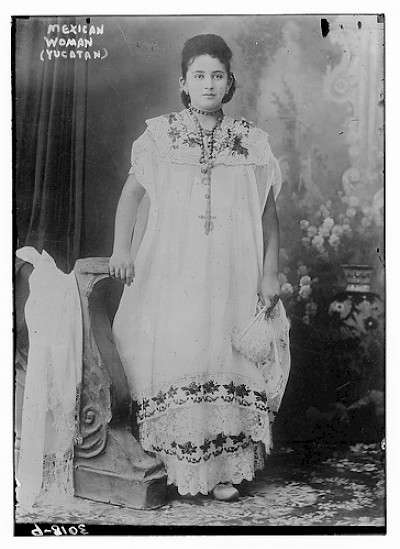 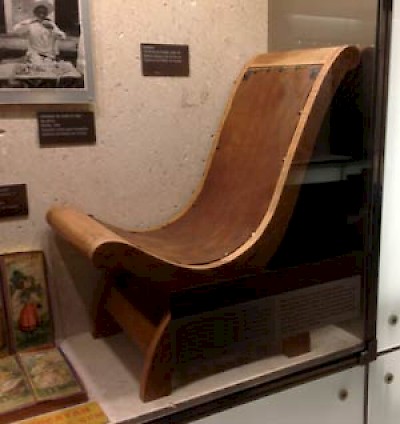