Few archaeological explorers can live up to the bodacious image of Edward Herbert Thompson. Most famous for dredging Chichen Itza’s sacred cenote in 1904, Thompson became famous for his adventurous archaeology. In fact, you could say he was the poster child for Yucatan adventuring at its finest.

Born in Worcester, Massachusetts in 1856, Thompson followed in the footsteps of the Yucatan’s first known Western-world explorers, John Lloyd Stephens and Frederick Catherwood, the author and artist respectively of the two book tome, Incidents of Travel in Yucatan.  Shortly after publication of this instant bestseller in 1843, the Caste War of Yucatan broke out (1847), limiting access to many of the Yucatan’s finest ruins and making travel there look even more appealing for a true adventurer. The Caste War closed Yucatan and Quintana Roo borders to all but indigenous Maya for nearly 60 years, making travel to the area downright dangerous.

Thompson, however, was appointed archaeological consul to the Yucatan in 1895 and became one of the first explorers to tread the land after the Caste War began.

Although he never received formal training nor studied any other related discipline, Thompson had great interest in the Mayas. Thompson’s officially-recognized work as an anthropologist began in 1879 when he published his thoughts on the Maya culture in a highly unscientific article he wrote for Popular Science Magazine.

Atlantis: Not a Myth?

Titled “Atlantis: Not a Myth,” Thompson's book attempted to link Socrates’ lost continent with the rediscovered Maya world.  Although he later disclaimed his theory, Thompson's article gained him the notoriety he needed to attract the attention of Stephen Salisbury, the vice president of the American Antiquarian Society. Salisbury was an avid student of Maya culture and in 1885 Salisbury chose Thompson to become a scientific investigator at the ruins on the Yucatan Peninsula. One of Salisbury’s friends, a US senator, asked the president to appoint Thompson as American consul to Mexico, and the stage was set.

Thompson was America's youngest appointed consul at the time. His post covered the states of Yucatan and Campeche, and he would use this post as a base from which to explore the ruins. With his wife, Henrietta Hamblin Thompson, the daughter of a retired whaling captain, and their two-month-old daughter, Thompson and his crew headed to the Yucatan in 1895.

Edward Thomspon passed his first months in Merida, where he began the slow process of getting acquainted with the culture and the people. Thompson’s approach to learning about the Maya was to befriend them, study their myths and psychology, and to master their language. He succeeded beautifully in all three areas. He traveled widely in those early months, trekking to over one hundred known ancient cities and pyramid sites, familiarizing himself with the ruins and the lay of the land. Unlike many of his more schooled counterparts, Thompson learned to travel light and live on what he termed “Indian food”. This gave him a distinct advantage over those of his colleagues who refused to “go native,” as Thompson had done.

Thompson’s fame as a Yucatan explorer included two well-known coups. The first was the $75 USD purchase of Chichen Itza under the auspices of Chicago meat packing magnate, Allison Armour. Thompson acquired 100 square miles of land on which the ruins were located, along with a Spanish plantation house that he used as his headquarters. (That plantation house is now known as Hotel Hacienda Chichen.) While waiting for the house to be rebuilt, Thompson camped out in the Nunnery at the ruins, using the building as both bedroom and office.

His second coup established his notoriety and archaeological fame. He dredged the cenote at Chichen Itza in 1904. From his first excursion to Chichen Itza, Thompson admitted an uncanny attraction to the sacred cenote.  In his long out-of-print book,People of the Serpent, published in 1932, Thompson wrote that the cenote beckoned to him when he first stood atop Chichen Itza’s El Castillo and gazed down at the grove of trees surrounding it. This initial interest spurred him on to read any and all texts he could find relating to the Maya. As all but three Maya codices or paperbark books had been destroyed by Bishop Fray Diego de Landa in the early 1500s, little information on the early Maya existed.

It is now well known that after Fray de Landa destroyed the Maya written language, along with countless statues and religious paraphernalia, he felt remorse over what he had done. The King of Spain ordered the priest to write a history of the Maya and their culture, and he complied with studious fervor. Thompson read the bishop’s account of the cenote , wherein Fray Diego detailed that during times of drought, priests and commoners made pilgrimages there to appease the gods. The Maya believed the gods lived in the depths of the cenote. The priest’s account indicated maidens and captive warriors were thrown into the well as human sacrifices. Afterwards, he wrote, it was also customary for commoners to throw in ornaments and gold in the same attitude of appeasement.

Thompson took de Landa’s account as fact and went to great measures to discover what was in the cenote. To implement his plan, he developed a diving apparatus. He solicited funds from friends, and then went to Boston where he took diving classes. While in Boston he adapted a dredging bucket, winch, tackles, steel cables, a derrick and a 30-foot boom for the project. He crated his new contraption and headed south.

Soon Thompson was back on Yucatan soil, training local Maya to assist him in what everyone considered to be a maniac’s misadventure. After fashioning materials to fit his needs, he dredged through the silt for a month, coming up empty day after day. One day, he pulled up an unrecognizable mucky substance.  He sensed that it was something important, dried it out and attempted to burn it. In doing this, he discovered that the unrecognizable blog was indeed copal, Maya incense. With this discovery, he knew he was on the brink of a major finding.

Two days later, Thompson's efforts were rewarded. Piece after piece of treasure was dredged up from the bottom of Chichen Itza's cenote. Thompson successfully brought up vases, ornaments and obsidian knives. But the large bucket on his equipment kept dropping items, and he knew that to better search the cenote, he would have to take the dive himself.

While in America, he had been introduced to a Greek diver. He enlisted this man’s services and within two weeks, the diver had rigged up two outfits of waterproof canvas with 30-pound copper helmets and plate glass air valves. He and the Greek dove the cenote and discovered amazing treasures. In the weeks that followed, they pulled up Maya god figures, gold discs, jade, and the clincher... human skeletons.

His discovery put the Maya civilization back on the world explorer’s map. He had proof that humans had been sacrificed at Chichen Itza. Young women had been hurled by priests into a dismal pool as offerings to their gods and Edward Thompson believed he had the skeletal remains to prove it.

Ironically, Thompson’s discovery threatened to jeopardize his standing in the archaeological community. It was later discovered, by journalist Alma Reed, that many of the dredged artifacts had been sent far away from the Yucatan in sealed diplomatic pouches to Boston’s Peabody Museum, where most remain to this day. But such was Thompson’s stature at this point that even this revelation did not diminish his position in the archaeological world.

How the Pyramids of Chichen Itza Were Built

Thompson also discovered how the Maya built the pyramids. Near Chichen Itza, he found shallow quarries with worked veins of sascab, the lime gravel mixture the Maya used as mortar. Scattered around the area he found hammer stones of calcite, pecking stones of flint and smoothing stones that were no doubt used to produce flat surfaces on walls. Even though the ancient Maya craftsmen had no metal tools, Thompson’s discovery of the quarry and tool remnants assisted scientists in determining how the Maya created their pyramids without the use of metal. He also found chisels of nephrite, a less valuable source of jade. As a test, he used one to carve his own name onto a stone to prove it could be done.

Thompson went on to discover an ancient Maya ‘date’ stone, later named the Tablet of the Initial Series, which served in deciphering the dates of Chichen Itza’s classic period by iconographers.

Edward Thompson’s exploits were those of an intrepid and tireless explorer. His continued determination throughout his 40-year tenure in Yucatan helped unravel the secrets of earlier Maya civilizations. Thompson’s adventures would leave an indelible physical mark on him. An encounter with a poison trap in the jungle left him lame in one leg for the rest of his life. But his true grit never faltered and in his lifetime, his archaeological fame soared, and because of his persistence, he left his indelible mark on the Yucatan Peninsula.

This is the second in a series of articles about the explorers of the Yucatan, written by Jeanine Kitchel.  Jeanine’s second book, Maya 2012 Revealed: Demystifying the Prophecy, a nonfiction look at the 2012 end date debate, is now available on Amazon, iTunes and Nook for only $4.99. 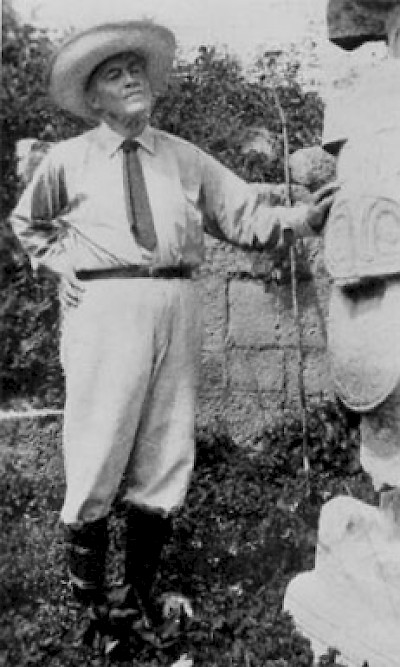 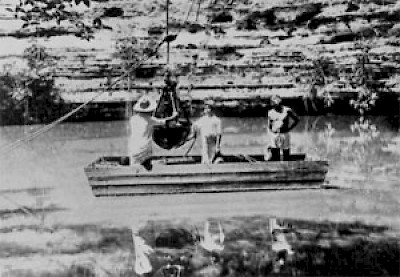 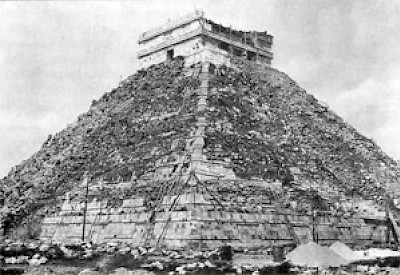