Our Cake And Eat It Too

It was Working Gringa's birthday, and we wanted to invite several other couples to dinner at our house to celebrate with us. Although the house we were renting was large enough to host a dinner party, we felt we didn't have the right furniture or setting for an enjoyable dinner party.

And, since everyone we invited still works for a living, none of us wanted to host the party and be responsible for cooking or cleaning up, or anything else for that matter. We just wanted to have an enjoyable evening without any more work. But we also wanted to be somewhere where we could be comfortable, where we could relax, kick off our shoes and sit cross-legged if the spirit moved us. In short, we wanted to be pampered but still feel at home. We wanted all the joys of dinner at home, with none of the headaches.

After much discussion and a mental review of the available venues, we decided on The Villa at Merida, a boutique hotel in Merida's centro. This hotel has seven guest rooms in a beautifully renovated colonial building on Calle 59. It is probably one of the more expensive hotels in the city, with hacienda-like ambiance and personalized service. What it also had that we cared about was a kitchen, a full bar, a competent staff and a lovely garden surrounding the pool.

Two years earlier at Christmas, friends of ours had invited us to enjoy a private dinner with them at The Villa. And one year, Working Gringa was enlisted by Yucatan Productions to play the mother of the bride for a photo shoot produced at The Villa by Hewlett-Packard. (We found her one day a year or so later on a small paper insert in an ink cartridge box!)

The Evening in Question

When we arrived at 8 PM, we were escorted through the hotel into the garden. As we passed the kitchen, we could see the white-uniformed chefs working away on our dinner. The garden was beautiful in the evening light. Candles around the pool and tiki torches around the patio lit the space as the stars came out beyond the 40-foot ceiba tree that reached into the sky above the garden. We sat around the pool on comfortable lounge chairs with our drinks, chatting and enjoying each other's company.

We talked and laughed and relaxed as if it was our own home, with the obvious exception that there were handsome young men serving us drinks and botanas whenever we asked for them. Maybe some of our readers have a lovely young man waiting on them at home, but for us, that person is usually an overworked (and occasionally cranky) spouse.

When dinner was ready, we moved the party to the patio in the back of the garden where a table had been set up for us. We were in our own private open space, with the stars above, surrounded by old stone walls, sitting in comfortable chairs and enjoying each other's company. The service was impeccable as several waiters served a lovely chardonnay and a delicious dinner.

First came the entrada: xcatic chiles filled with cochinita pibil, beautifully arranged on a banana leaf folded into a fan. The cochinita was delicious, and the added crunch and spice of the xcatic chile added to each bite. Nothing was left but the banana leaf when they took those plates away! The second serving was a fresh garden salad with our choice of dressings. The salad had jicama and other vegetables as well as the usual suspects of lettuce and tomato, and was both fresh and refreshing.

When we had finished our salads, the waiter showed us a large mero that had been grilled tikin xic (pronounced TEEK-en-sheek) style for the occasion. We offered our thanks to the grouper for giving his life for our nourishment, and then the fish was portioned and served.

Mmmm... melt in your mouth delicious! If you've never had tikin xic-style fish, do yourself a favor and order it at the next possible opportunity. The way they prepare the fish in onions, achiote and other spices makes it moist, firm and incredibly tasty. The chefs at The Villa served a great version of this Yucatecan recipe... but you don't have to eat at a fancy hotel to get it. We have also had amazing tikin xic on a beach on Isla Mujeres, among other places.

Dessert came twice, because of the birthday. First, a traditional Yucatecan dessert of ciricote, a tropical fruit baked in almíbar, a sweet syrup made with water, sugar, sherry and honey. We all discovered that we really like ciricote, which together with pitaya, mamey and zapotes, are delicious fruits we'd never heard of until we moved to Yucatan. The birthday cake was a tres leches cake, one of those heart-stopping, pound-gathering indulgences that should only be eaten once a year, if that. It disappeared rather quickly as well.

About halfway through the festivities, the skies clouded over and it started to rain. As the rain built up into a real downpour, all the waiters appeared with big patio umbrellas and set them up over our heads for ten minutes until the rain stopped. Before the umbrellas went up, we improvised by putting our napkins on our heads, a time-tested and sure-fire way to get a party started. The waiters were laughing and we were laughing and it seemed like the sky was laughing til it cried. We were reminded again of the beauty of a tropical downpour: it's refreshing, it doesn't last long and it's more a delight than a problem.

The evening ended with cappuccinos and la cuenta, por favor. La cuenta was not as outrageous as you might expect, at least it was no more expensive than dinner and drinks at one of the upscale restaurants around Merida. We had requested the menu two days in advance and they quoted a price of $27 USD per plate, which included wine with the meal and the desserts. Cocktails and tip added to the bottom line, of course, but a dedicated wait staff, candles, tiki torches, traditional Mexican party decorations, and having the garden to ourselves during a brief tropical rain? Priceless!

Next time you are planning a dinner, might we suggest you consider one of the hotels in town? There are many beautiful spots to enjoy a dinner with friends with all the comforts of home and none of the worries.

Now here's a treat. The recipe for almíbar and what to do with it...

1. Mix 1 cup of water and 2 cups of sugar. Add a tablespoon or two of Sherry and honey and put the mixture on the stove over a medium heat.

2. Make sure the sugar is fully dissolved in the water or it will turn into caramel at the bottom of the pot.

3. Stir continuously while the mixture boils until it gets as thick as you like it. If you use refined sugar, the syrup will be clear and light, if you use brown sugar it will be darker, a little more tacky and have a "bolder" taste.

4. Slice some yellow apples, or use whole peaches or ciricotes, and put them into a jar. Then pour the syrup over the fruit until the jar is full and seal the jar.

5. Put the jar in the refrigerator, wait a day or two (if you can) and then treat yourself to a delicious Yucatan dessert!

We had tasted almíbar before on the apple slices that come with the pork chops at Peregrino's, but we didn't know what it was. Now we do. It tastes like nothing else we've ever tasted. Try it! 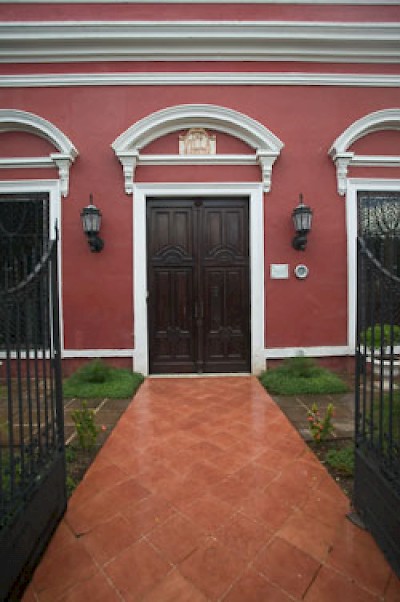 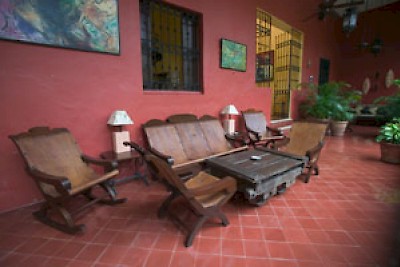 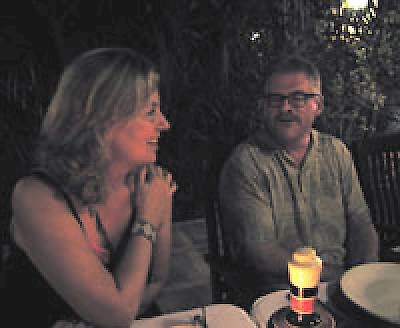 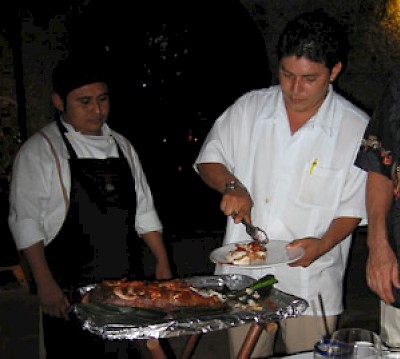 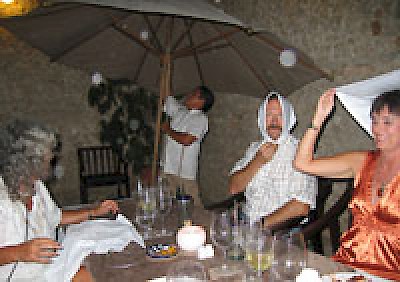