The Many Faces of Sopa de Lima

If you have spent any time at all in the Yucatan, you have probably had the occasion to have a cup or bowl of sopa de lima, Yucatan's version of your grandmother's chicken soup. This soup is just as healthy as the one your grandmother made, complete with that natural penicillin that grandma somehow knew it had all along, and it has a Yucatecan twist... well, more than a twist. The sour lima that grows everywhere in the Yucatan is one of the sopa de lima secret ingredients. It lends a tangy bite to the chicken soup, making it not only healthier but more refreshing. The lima, as it is known by those who live here, is a variety of lime called Citrus Limetta.

Of course, almost no one here knows it by that name. The lima is everywhere, and it literally grows on trees (like you wish money would...) in millions of Yucatecan backyards. Its no wonder that this recipe has become a staple of Yucatecan cuisine... it is healthy, easy to make, incredibly tasty and you have to do something with all those limas dripping off the trees!

Our traditional cookbook, year of publication unknown, gives the recipe for sopa de lima as follows:

Chop the tomatoes, onion and chile and fry them up. Add this mixture to the caldo de salpimentado (seasoned broth... another subject altogether) with the strips of lime, a pinch of salt and vinegar. Let that boil. Cut the tortillas in thin strips, and fry them until they are golden. Drain the tortilla strips. Serve the soup hot (bien caliente... good and hot!), with strips of the pechuga (breast). On top, toss the fried tortilla strips and a strip of lime.

That's the entire recipe. How much vinegar? How much soup? It doesn't say... you are supposed to know these things! A search in the very same book for a recipe for caldo de salpimentado yielded nothing... apparently another thing any self-respecting cook should know how to make. We did find a mention later in the book that the recado (paste) for salpimentado consists of these ingredients: pepper, cloves, cinnamon, oregano, roasted garlic and roasted onions. It is probably one of those beautiful mounds of mixed spices that you can see in the mercado. If you cannot walk down to the mercado for your salpimentado, probably chicken stock will do, as it is mentioned as the soup stock ingredient in a more modern Yucatan cookbook (Cocina Yucateca de la Hacienda Teya).

Another Yucatecan cookbook we own, Yucatan Cookbook: Recipes and Tales by Lyman Morton, adds roasted garlic, habanero chiles, avocados, mint, epazote and bay leaves to the recipe. This recipe was apparently gleaned from the famous artist, Alberto Castillo, who has since passed away. He told Lyman he learned it from his mother, making us fortunate that he has preserved it. (If you love the Yucatan, you'll love that book, by the way, and the stories about Alberto Castillo are some of the best.)

We recently ate lunch at the Casa de Piedra, the restaurant at Hacienda Xcanatun outside of Merida, Yucatan. Every dish is good at Casa de Piedra, surpassed only by the attentive service and the exquisite surroundings. We had been eating out for days before that and for lunch we just wanted something light, but substantial. Sopa de lima fit the bill perfectly. As we relaxed under a lazy ceiling fan, enjoying the tropical afternoon, and watching them pour the soup part of the sopa de lima at our table, we remarked how we would love to have this recipe.

Roast limas (on hot griddle, or wrapped in foil in oven). Heat chicken stock, and add cilantro bundle. Simmer. In frying pan, sweat onions and peppers over medium heat, until onion is translucent (do not brown). Add to stock, simmer until cooked through. Juice the roasted limas, and add juice to stock. Add cubed tomatoes. Season with salt and pepper. Plate, and add shredded chicken and tortilla strips. Slice remaining limas, chop, and add a teaspoonful to each soup plate. Alternately, decorate rim of soup plate with slice of lima, and let each person add it if desired.

Voilá! Or rather, aqui tienes! Here you are! The Casa de Piedra recipe showed up in our email, courtesy of Cristina Baker, proprieter of Hacienda Xcanatun. Lucky us, lucky you! Now we can all enjoy this tasty dish at home. Make it the way they do it at Hacienda Xcanatun, at Hacienda Teya, the way Alberto Castillo's mother made it or make it your own way. Any way you make it, it is good and good for you! 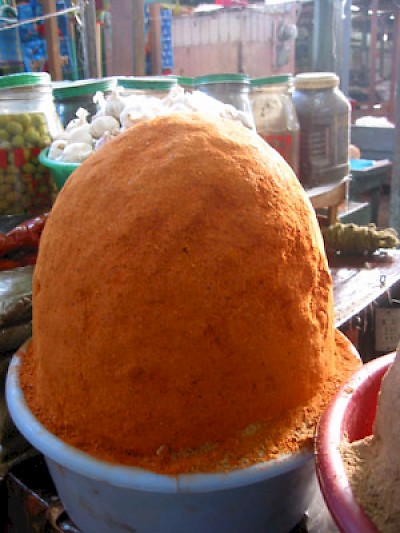 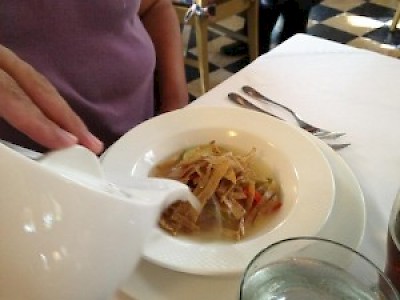