A new comida casera restaurant just opened around the corner. This place used to be a store that manufactured screws to order, and so the doors still bear the name, Casa de Los Tornillos (House of the Screws). The restaurant is a welcome addition to the neighborhood with seven very neat tables and white walls, each table topped with oilcloth tablecloths, a napkin holder, and a small vase with fake flowers. The chairs are provided by Coca Cola.

Every day at the new Mary Soco's, there are two or three meals to choose from. Today was a kind of beef stew in tomato sauce, and the other was something called Pesuñas Rebozadas. We asked to look at the food, since we had no idea what pesuñas were... and Mary was frying something up in batter that looked like a big chile relleno. "Hay carne?" we asked. "Is there meat?" "Si, claro! Cerdo!" "Yes, of course... pork". Well, we like pork. We'll try one of each.

We sat down and were served one Coke and one Coca lite upon request. (The only other choice is Sabor which means "Flavor" technically... but what it really means is "another soda that isn't Coke"). Mary Soco's waitress (daughter? niece?) brought us each a soup bowl full of black beans in their own broth, a wooden-lidded bowl with hot corn tortillas and fresh silverware, and later, the main course. One plate had white rice, covered with chunks of Yucatecan avocado (lighter and more watery avocado than we're used to in the States), and about six big squares of beef in a tomato stew. It was Puerco Empanizado and it was delicious. The second plate had a salad topped with the same avocado chunks, half a habanero pepper and two big rellenos, battered and covered with the pink, pickled onions that are ubiquitous in Yucatecan cuisine. Still curious as to what was inside, we dug into the rellenos and found... a white bone! a rather clean, white bone about the length of a large man's knuckle. We tried again... another bone. It turns out that pesuñas are pigs knuckles.

We must admit, we didn't find them particularly attractive.

But that's the fun of eating there... sometimes it doesn't work out. But sometimes you discover something you love. In either case, you can sit and watch the WHOLE NEIGHBORHOOD come in for lunch. While we were there (about a half hour), at least five middle aged women came in with their bags and tupperwares to get lunch to bring home to their husbands. Ditto schoolchildren for their parents. An older woman and her teenage daughter, obviously just home from school, came in and sat down, then a man who looked like he had just left a construction site. The semi-crazy man from the next block, who speaks surprisingly good English, came in and gave us a Spanish comic book. This was a thank-you gift because we bought an old doll from him (for our puppy) the day before for 9 pesos so he could buy batteries for his radio. Everyone knew everyone else... the atmosphere was relaxed, friendly and fun.

For Yucatecans, lunch is the main meal. It's a time to spend time with your friends and family, eat heartily and then retire for your siesta... because it's usually, like today, VERY warm outside. So that's where we're headed now. Hasta luego... 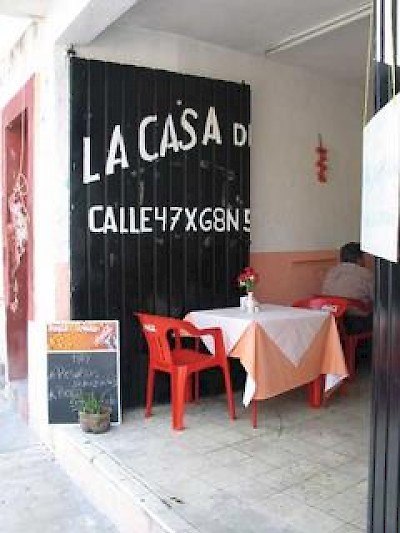 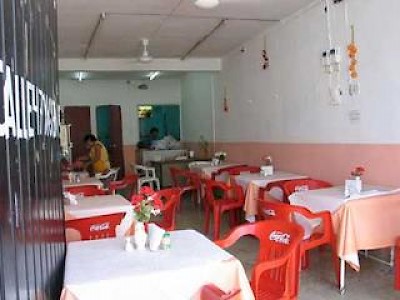