When you hear about the Queen's Arms, what do you think of? If you Google "the Queen's Arms", you'll get pages of pubs and restaurants in the United Kingdom and around the world. Of course, the phrase refers to the Coat of Arms that is basically a logo for members of the royal family. Each of them are slightly different, depending on the which member is being represented, and in case of the Queen, well, her logo is called The Queen's Arms.

But how did we get from there to the dish called brazo de reina in the Yucatan? Again, if you Google it, you'll find that Brazo de Reina is a traditional sweet served in the afternoon in Chile (what the British and Dutch might call tea-time), consisting of cake and caramel, rolled up and sliced. In England, they call that a jellyroll or a Swissroll (and no one knows why they call it that, either). In parts of Spain, they call it a brazo de gitano (gypsy's arm) instead. In Colombia, it might be called a pionono and filled with guayaba jam. Yes, they are all layered and rolled, but there the resemblance stops. The others are sweets and the commonly served Yucatecan brazo de reina is not. In Yucatan, brazo de reina is a tasty tamale, served in large slices, topped with tomato sauce and ground pumpkin seeds.

Ah, but here the plot thickens. We have three Yucatan cookbooks. Two of them list brazo de reina as a meal, fixed with masa, chaya and eggs as seen below. But the oldest, a book called Cocina Yucateca published in 1979, lists brazo de reina as a dessert, fixed the way it is fixed in most of the rest of the world.

So when in Yucatan did brazo de reina go from sweet to savory? We may never know... but all this controversy has made us hungry, right?

Brazo de Reina in the Yucatan may also be referred to by its Maya name, Xtobichay. It is traditionally served during Lent in Yucatan, so you can start practicing making it now and be an expert by Lent! The preparation is simple and the ingredients are easily available in Merida and the Yucatan Peninsula, but maybe not so much in other parts of North America. The chaya used in it is of course rich in iron and calcium (and spinach would be a worthy substitute), and the ground pepita (pumpkin seeds) are full of protein. As it turns out, except for the lard (which, if you insist, can be substituted with something similar), brazo de reina is a pretty good dish to serve when a vegetarian is coming to dinner.

First, chop the chaya leaves in a separate bowl while you boil the eggs.

Next, roll out the dough on the banana leaves. The bigger the "arm", the more dough you roll out in one piece.

Roll the dough like a blanket, covering the eggs and seed so that it acquires the appearance of a roll or "arm", all wrapped in that banana leaf.

When the "arm" is cooked, remove it from the banana leaves. Arrange the leaves on a platter. Slice the roll in 2-3 inch slices, and arrange on the banana leaf.

NOTE for those living outside of Mexico: If you cannot find banana leaves, you can use aluminum foil instead. It doesn't have the same panache, but it does the trick! 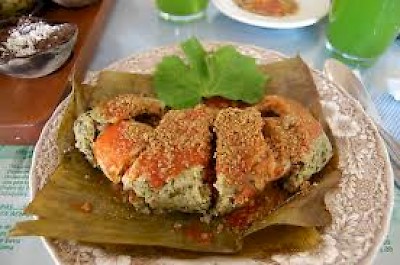